The Pew Research Center recently released a report that explores Americans’ views of open government data. The findings come from a survey of 3,212 members of the Pew Research Center’s American Trends Panel. Data collection is a core government function. The government collects data on demographics, economic change, climate activity, and many other areas relevant to public policy. There is a growing effort to make government activities more transparent by encouraging the release of more government-collected data to the public. Many Americans hope that increased data transparency will aid journalists, make officials more accountable, and improve decision making. Few think that government at the local, state, and federal levels are doing a great job of providing useful data.

Open government and open data initiatives are progressing, but the majority of Americans are not taking full advantage of them. Two thirds of Americans use the Internet to get more information about their government. Far less are utilizing open government initiatives where agencies are sharing data online for public use. The use of open data is limited to routine activities like looking up the hours of operation for a local park, paying a ticket, or renewing a license. 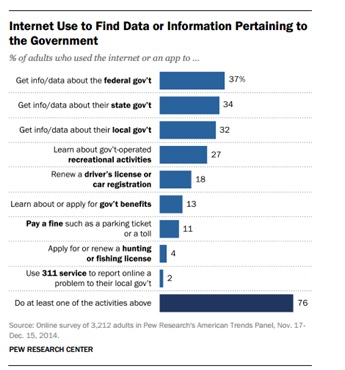 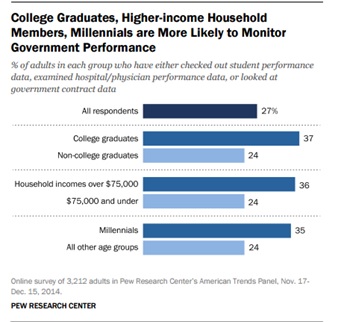 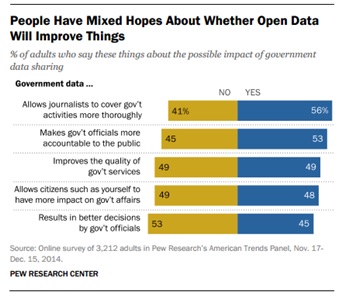 Partisan affiliation strongly affects Americans’ views on trusting government, which appears to have a relationship with how people perceive open data and open government initiatives. Forty-eight percent of respondents in this survey sample identified themselves as being a member of or leaning toward the Democratic Party while 41 percent identified as Republicans or as leaning toward the Republican Party. Democrats are more likely to report that open data will have positive impacts than Republicans. For example, 58 percent of Democrats believe open data will make government officials more accountable to the public. Forty Five percent of Republicans expressed that same belief. 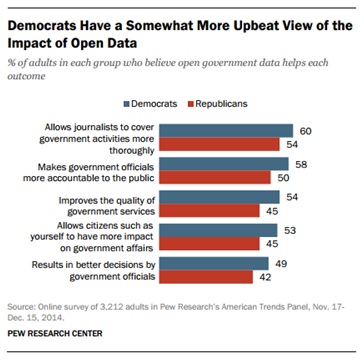 Views on open data are not uniform 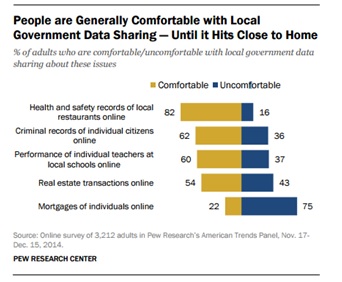 Of the two-thirds of Americans who own a smartphone, varying numbers use government data based apps: