On Friday, the Office of the National Coordinator for Health IT released its long awaited roadmap for interoperability among the healthcare IT systems in the United States. Emphasis on economic factors and leveraging the power of market is mentioned as one of the guiding principles that ONC provides toward the future interoperable health IT ecosystem. I argue that this principle is the key element for achieving nationwide interoperability, provide a detailed discussion on the economic incentives and disincentives of electronic exchange of medical information and propose a business environment in which the economic incentives of a wide variety of entities in the healthcare market are aligned towards achieving nationwide interoperability.

The US spends more than 17 percent of its GDP on healthcare, more than any other country in the world. Despite this $2.8 trillion expenditure, the quality and efficiency of the US healthcare ranked last when compared to Britain, Canada, Germany, Netherlands, Australia, and New Zealand. As a result, a concerted national effort to reform healthcare using information technologies with a focus on reducing costs and increasing quality of service is under way. The Health Information Technology for Economic and Clinical Health Act (HITECH) of 2009 authorized the government to spend over $26 billion as economic incentives to promote the adoption and use of electronic health records among medical providers. One of the principal objectives of this act is to set up Health Information Exchange (HIE) platforms through which providers can access medical data in a timely and cost-effective manner. The financial savings through full implementation of HIE platforms nationwide is estimated to be over $77 billion per year. Despite the economic incentives, the exchange of health information between medical providers rarely takes place. The lack of technical interoperability is cited as the most important reason for this failure.

In a recently released paper, I argue that interoperability should be addressed as an economic issue rather than a technical problem. Due to economic disincentives, medical providers will not engage in health information exchange even if their EHR systems could perfectly interoperate with each other. There is also reason to worry that the third stage of the Medicare and Medicaid EHR Incentive Programs may potentially have reverse outcomes and further inhibit health information exchange rather than fostering it. 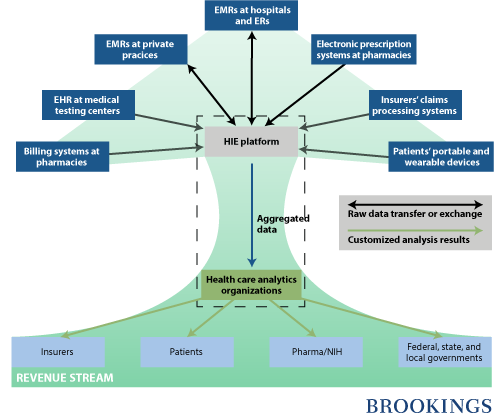 To address this problem, I propose a business model in which the economic incentives of all of the major entities in the healthcare market are taken into account. A unique feature of the proposed model is that HIE platforms would be self-sufficient  and not depend on federal and state financial support. This model identifies two types of services that can generate significant revenue for the HIE platforms. The first type includes data analytics services to a variety of potential customers such as pharmaceutical companies, insurance companies, and value-based care organizations. The second type includes real-time data services to medical providers. The paper outlines a shared savings program in which the savings realized as a result of HIE usage is transferred to the HIE platforms and the medical providers. This will help to cover a part of the operational costs of the HIE platforms as well as incenting the medical providers to engage in information exchange at a higher level.