Many years before the creation of Healthcare.gov, President Obama embraced  data analytics during his early years in the Senate. In 2006, he and senator Tom Coburn (R-Okla.) successfully sponsored the Federal Funding Accountability and Transparency Act, which resulted in creation of  usaspending .gov, “a significant tool that makes it much easier to hold elected officials accountable for the way taxpayer money is spent“.

A History of Failed Federal IT Projects

A considerable amount of taxpayer money is spent on federal IT projects, but in contrast to the aspirations of Obama in his early years in the Senate, it is not spent responsibly. According to the Standish Group report, from 2003 to 2012 only 6% of the federal IT projects with over 10 million dollars of labor cost were successful. 52% of them were either delayed, went over budget or did not meet user expectations. The remaining 41% of the IT projects were abandoned or started from scratch. Perhaps most troubling is that healthcare.gov is just a one example among many.

The 319 million dollars spent on healthcare.gov is a relatively small figure compared to the 4.6 billion dollars of federal grants awarded to different states for research on and development of insurance marketplaces. Although the online marketplaces in some states such as Kentucky, have performed exceedingly well, in some other states such as California, the websites had similar problems to healthcare.gov. It’s interesting to note that the amount of federal funds allocated to California is four times more than the amount which was assigned to Kentucky. The map below shows how much each state received. 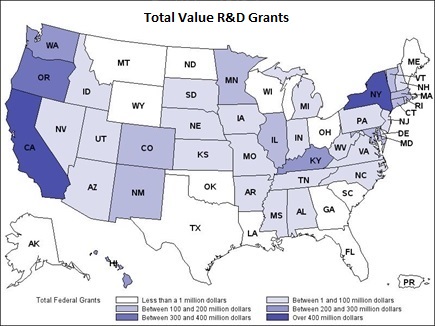 The role of contractors in governmental IT projects has often been neglected. Although the government’s IT contracts can be categorized as public knowledge, the contractors and their performance in federal and state IT projects often remain unnoticed.

A Better Solution for Government IT Projects

A better approach to improve outcomes in federal and state IT projects is to increase transparency. Governments can release the performance evaluations of their IT contractors to the public and let the free market reward and penalize contractors accordingly. CGI Group, the initial contractor of healthcare.gov faced the consequences of its poor performance when its stock price declined by 2.9%. This is a unique exception, which happened mainly as a result of full media coverage and public scrutiny of healthcare.gov’s problems. It is not easy for the public to access data on performance of any of the state marketplace contractors. For example, we know Accenture helped to solve the problems of healthcare.gov and Deloitte did a pretty good job in Kentucky, but we do not exactly know what went wrong with the exchanges in California or Maryland or who was responsible for these problems.

Easy access to details of IT project descriptions and performance evaluations, will enable researchers to conduct comprehensive studies on critical success and failure factors of these projects. We need to know how different states managed to build their insurance marketplaces, how effectively the federal grants were spent and how future problems can be avoided.