This year the number of cellphones is expected to exceed the worldwide population.  The usage of mobile devices has increased rapidly over the past several years.  Recently Cisco released their updated Visual Networking Index (VNI) survey, which includes data on the volume of mobile traffic.  The Cisco VNI survey uses analyst projections, Cisco forecasts, and direct data collection.  This year’s forecast predicts that an even larger number of mobile phone subscribers will use more data than in previous years.

Growth of Mobile Usage Will Continue to Increase

Global usage is expected to increase exponentially.  Figure 1 includes data from both the 2013 and 2014 Cisco VNI forecast.  The values from 2012 and 2013 are from the 2013 and 2014 forecasts respectively.  The values from 2014 to 2018 are projections based on the survey data from the 2014 forecast.  Cisco predicts that worldwide monthly usage will reach 15.9 exabytes per month by 2018.  Last year’s forecast predicted 1.6 exabytes per month missing by only 0.1 exabytes.  They predict a future Compound Annual Growth Rate (CAGR) of 61 percent. The estimated CAGR from the previous year was 66 percent.  Despite this slow down increased numbers of subscriptions, usage of 4G devices, and higher numbers of people using bandwidth intensive applications like streaming video will drive up the volume of mobile data. 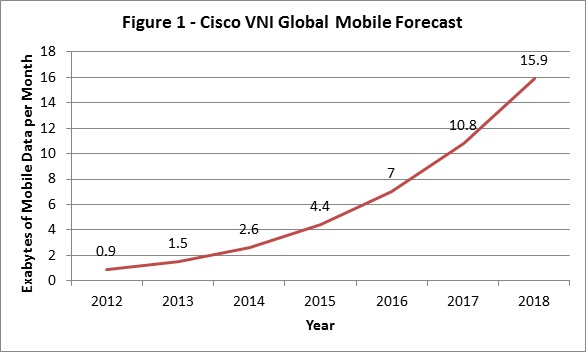 US Continues to Lead World in Mobile

The United States held its position as the leader in mobile traffic and is projected to remain in that position until at least 2018.  To create Figure 2 I used the country level CAGR and the predicted exabytes per month in 2018 (included in the 2014 forecast) to estimate the exabytes per month for the years 2014 to 2018.  Currently the United States accounts for 24 percent of global mobile traffic.  By 2018 that number is expected to decline to 17 percent.  In 2018, the United States, China, India, Japan, and Korea are estimated to use the largest volumes of mobile data.  By 2018 those five countries are predicted to use about half of all mobile traffic.  The United States ranks near the bottom of the 25 countries for which data is available with a CAGR of 0.5.  The five countries with the fastest growth rates are India (0.88), Russia (0.79), Mexico (0.73), China (0.73), and Indonesia (0.73).  If those CAGR’s hold then India will pass the United States and China in monthly data usage in about 10 years. 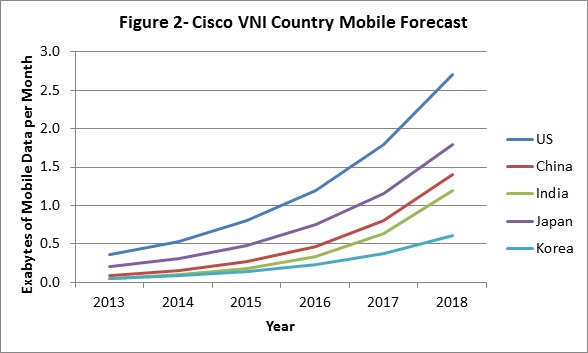 TechTank will continue to cover the mobile economy.  Stay tuned for more research and analysis on mobile technology policy.

Frank Nagle
Thursday, May 19, 2022
Get daily updates from Brookings