Here’s a question I get asked a lot: “Ok, so what’s the ideal amount of social mobility?” Scholars interested in relative income mobility often use a quintile transition matrix, showing how much ‘stickiness’ there is in the income distribution between two generations: 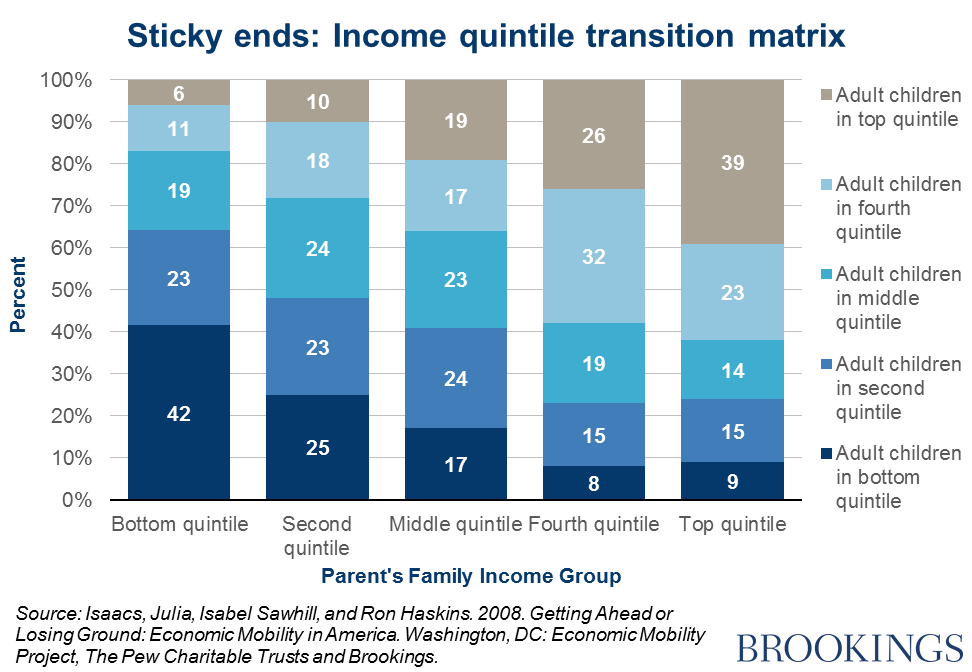 (Note that this version draws on data from the Panel Survey of Income Dynamics, but we’ve produced matrices using data from the National Longitudinal Surveys, as well as one for educational mobility.)

Four out of ten children born at the bottom will remain there as adults—and about the same stickiness can be seen at the top. In a world of ‘perfect’ relative social mobility, each person, regardless of background, would have precisely a 20 percent chance of ending up in each quintile.

As the philosopher Adam Swift points out in an important paper titled Would Perfect Mobility be Perfect?, “the conception of a society in which people’s destinations are quite independent of their origins often acts as an implicit benchmark.”

But no such ‘20 percent society’ like this has ever existed, and we wouldn’t want it to. Many of the mechanisms leading to the inheritance of status are legitimate, even laudable, such as committed and engaged parenting, an emphasis on education, and the transmission of productive values.

On the other hand, most observers would consider a world in which status was completely dependent on origins—a caste system, in other words—as morally objectionable. Many nations—and indeed cities within the U.S.—demonstrate much greater relative mobility than others. This suggests that there is nothing magical about a particular matrix.

Of more interest, however, is the second set of questions on the rates of upward and downward mobility people that would consider ideal. Respondents were split into liberals and conservatives in order to highlight ideological differences.

Americans across the ideological spectrum want to see people born at the bottom to rise up the income ladder to a much greater extent than they do: 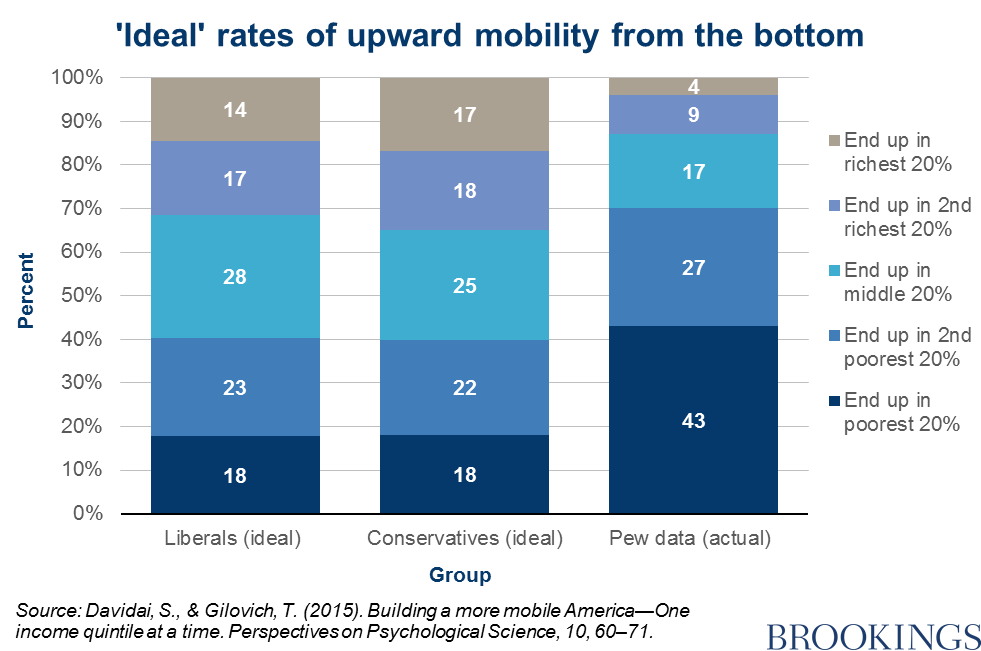 In fact, Americans here seem to want something close to the utopian ideal of a 20 percent society.

…But people are against downward mobility from the top

But when asked about ideal rates of downward mobility from the top quintile, a very different answer emerges. Americans are against people being stuck in poverty, but are much less worried about the persistence of relative affluence. In fact, the ideal rate of stickiness at the top closely mirrors the real data: 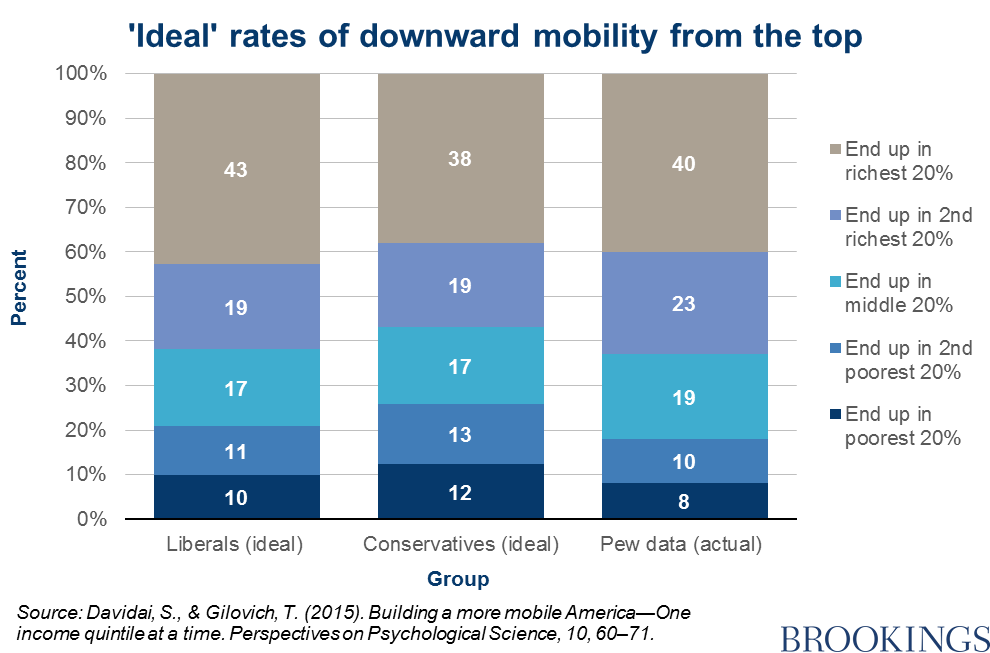 This is not the result of conservativism—in fact, liberal respondents were slightly more in favor of the perpetuation of upper middle class than conservatives.

Psychologically, these findings make perfect sense. The idea of people losing ground is much less appealing than the idea of people moving up. But they create mathematical difficulties. Davidai and Gilovich forced their respondents to make their ideal categories add up to 100 percent, but only asked about the top and bottom quintiles. Alert readers will already have noticed a problem here. If the bottom quintile is full of Horatio Alger figures, but the top quintile is fairly persistent, this is probably bad news for the people in between.

Liberals want 14 percent of the bottom quintile to rise to the top, but also want 43 percent of those born at the top to stay there. That’s 57 percent of the top-quintile slots accounted for. This leaves only 43 percent left for all of those from quintiles 2, 3 and 4. That’s 14 percent each—the same as for the bottom quintile. To ensure that almost half of the kids of the upper middle class can stay there, even liberals seem to want kids from every other rung of the ladder to have just a one in seven chance of reaching the top quintile.

The ‘glass floor’ and the upper middle class

Absolute mobility—a measure of people doing better than their parents—is an uncontroversial goal, mostly relying on robust economic growth. The zero-sum nature of improving relative mobility makes it unattractive to many, especially those who seek elected office. But when growth is sluggish, upward mobility relies more on a relative change in status. Perhaps we don’t really want to disrupt the intergenerational transmission of top-quintile status at all, to put too many cracks in what I’ve called the ‘glass floor’ preventing downward mobility from the top. Perhaps we think that even if we did want to, the remedial policies required would be much worse. But if this is the case, it would be good to be honest about it.