It isn’t easy being a man today. That is, at least, the strong message coming from professors and movie producers. Men are now, according to a provocative cover article in The Economist, “The weaker sex.” They are failing to launch, failing out of school, failing in relationships. The new world of feminism and globalization has pulled out the rug from under men who could once enjoy respect and a decent living simply by virtue of their Y chromosome.

Class and generation gaps among men

There are both generational and class gaps in the state of the modern male. Older men worked their way up in world of strongly gendered divisions of labor. But their sons have seen the labor market alter beyond recognition. With many more women than men now graduating college, this trend is set to continue. The pre-feminist world is gone—for good.

Well-educated men have been able to adapt more easily to the new world, and indeed have benefited on many fronts. They have more educated, higher-earning wives, which reduces some of the pressure to be a sole breadwinner—as well as boosting household income. Affluent couples have adopted more egalitarian norms about gender roles, especially with regard to paid work and parenting. They may not yet have created “symmetrical families”—but they are moving in that direction.

Meanwhile, men with fewer skills have lost status on both the home and work front. They are most likely to hold more traditional views about male breadwinning, but least likely to be able to live up to them.

The plight of less-educated men makes the worse educational performance of boys more troubling. As The Economist points out, teenage boys are now 50 percent more likely than girls to fail at all three key school subjects—math, reading and science—than girls, across OECD countries.

Boys appear to be more vulnerable to the effects of being raised by a single parent, and also to growing up in certain areas. The latest research from Harvard’s Raj Chetty (highlighted at a recent Center on Children and Families event) shows that the places children grow up has a causal impact on their later earnings. But the effects of growing up in a worse area are bigger for boys.

As a result of growing up in Baltimore City, for example, boys earn 27.9 percent less than the national average. The equivalent wage penalty for girls is just 5.4 percent: 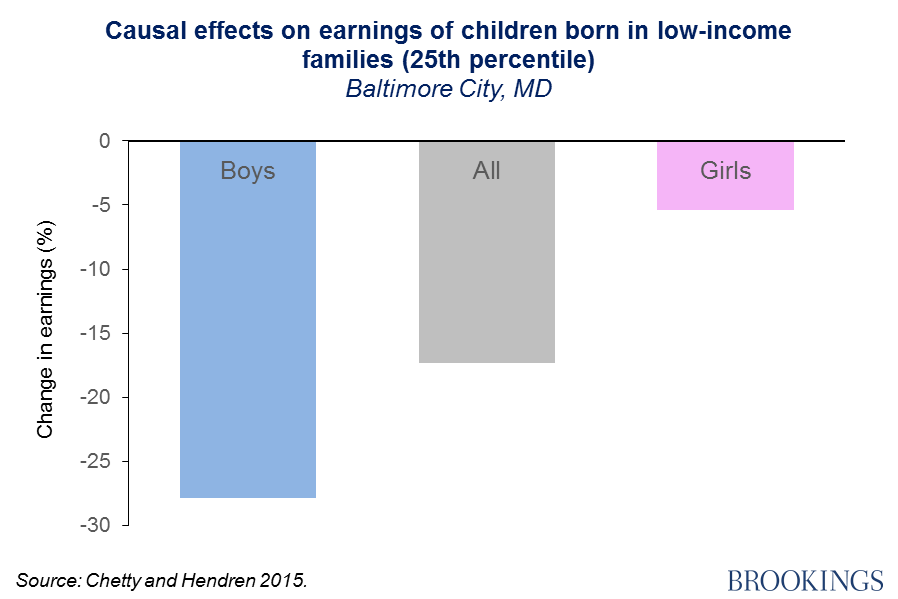 Of course, there is much more to being a man than money: in fact, to define masculinity in breadwinning terms alone is a fatal move. As Barack Obama said on Fathers’ Day seven years ago, fathers are “teachers and coaches. They are mentors and role models.” But as he also said, “too many fathers are missing—missing from too many lives and too many homes.” In its poorest neighborhoods, America faces a fathering deficit, one that will make it even harder for the boys of today to make it as men in the new world.

Rethinking the economics of child care and paid leave: Policies to protect workers and families

Designing a universal child allowance: Who can claim which kids?