The American Savings Promotion Act (H.R. 3374), a bipartisan bill passed by the House of Representatives this week (yes, it does sometimes happen) could lift economic mobility in America by boosting savings, especially in lower income neighborhoods. The bill removes legal impediments to banks and thrift institutions offering “prize-linked savings” products (PLS). There’s a companion bill awaiting action in the Senate.

Building personal savings is a critical element in moving up the economic ladder. A cushion of capital can tide a household over a setback, such as unexpected health costs, and help mobility in a positive way, such as moving across town for a better job. Developing the habit of saving, even in a small scale, is connected to other positive behaviors, such as completing college.

The savings habit is often picked up early. Like most Britons brought up in the 1950s, my rural public elementary school had a savings club and I dutifully made deposits from my pocket money. Everyone did. Here’s my card: 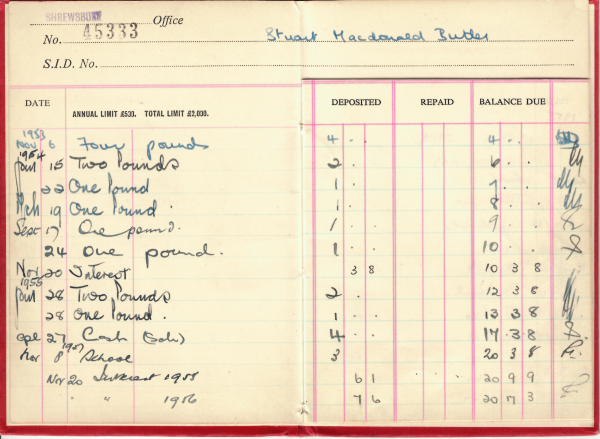 Saving was therefore an expected and reinforced habit that was practically grafted into my DNA— and remains with me.

But we also know that fewer Americans are in the savings habit today. The most troubling feature of the wealth gap is that modest-income Americans save little or nothing. So what can we do to increase savings among lower-income households? We can give new financial incentives for savings, which appeal to the rational left side of the brain. But we need more emotional, “right brain” approaches too.

All Should Seek Prizes (For Saving)

Prize-linked savings (PLS) accounts aim to entice people into saving more. Unlike traditional savings accounts, which now pay out a fraction of one percent interest, institutions offering PLS pool the interest from all accounts, hold a drawing and distribute the accumulated interest as “prizes”, from a few dollars to a million or more. It appeals to the gambler’s instinct, like a lottery. But unlike a lottery, a “loser” still ends up with a bundle of savings.

PLS accounts have a long history and there are versions in several countries. The United Kingdom has been a leader, establishing national premium bonds in 1957, dubbed “savings with a thrill.” The bonds pay no interest, but each year bond-holders have chances of winning from the equivalent of a few dollars to about $1.5 million. Roughly one-third of Britons own the bonds, with a disproportionate number of modest-income individuals and first-time savers as bondholders.

Some U.S. states have opened the door through state laws that permit credit unions to open PLS accounts. For instance, in 2009 a group of Michigan credit unions established “Save to Win” accounts, with monthly prizes ranging up to thousands of dollars, that successfully attracted non-traditional savers. Federally-charted financial institutions have so far been prevented from offering PLS accounts by unduly wide statutes and regulations, aimed mainly at organized crime. The new bill would curb the impact of those laws and enable PLS accounts to flourish. Let’s hope the Senate follows suit.

How COVID-19 changed the world: G-7 evidence on a recalibrated relationship between market, state, and society