It is a good point, well made, and one we should have made ourselves. The educational mix of the United States has not been constant, so in relative terms immigrants have become less educated. (Whether they have become less skilled is another matter, but that’s for another day). 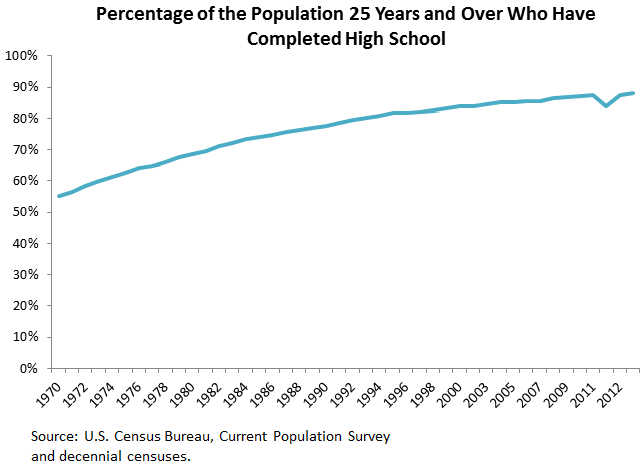 The truth is that any studies using fixed educational categories, like college graduates or those without high school diplomas, face this problem: the numbers in each of the categories have changed substantially over time. So when we compare earnings or marriage rates between these groups we should bear in mind that they make up very different slices of the population. Failing to complete high school in 1970, along with half of your peers, is clearly not the same as being in the 12% who did not complete high school in 2013. Equally, the significance of being a college graduate may be different when it makes you part of a small minority, as opposed to a large one.

Of course, many of the data sets we rely on make use of these categories, so there is often little alternative. And this does not change the main argument of our two-parter on immigration, which is that, historically, immigrant families have high rates of intergenerational mobility. But we should be attentive to the shifting weights of each category.