Part 1 in a three-part series on inequalities in early childhood development.

Policy-makers have developed an obsession: early childhood. Obama is struggling to make pre-K education accessible to all. Governors around the country—Democrat and Republican alike—are investing in the 3- and 4-year-olds in their state. Despite some disappointing evaluations of the Head Start program, significant political and financial capital is being invested in preschool.

The link between income and the acquisition of cognitive skills—for which the best data exists—is strong, consistent, and clear. The graph below shows what percentage of children by family income are top performers on cognitive ability tests before starting school, when starting high school, and during adolescence. The three tests are the Peabody Picture Vocabulary Test (PPVT), the Peabody Individual Achievement Test (PIAT), and the Armed Forces Qualification Test (AFQT).

As you might expect, children from affluent homes—measured by income quintile (equal fifths of the distribution)—are much more likely to be scoring in the top third of the ability range. 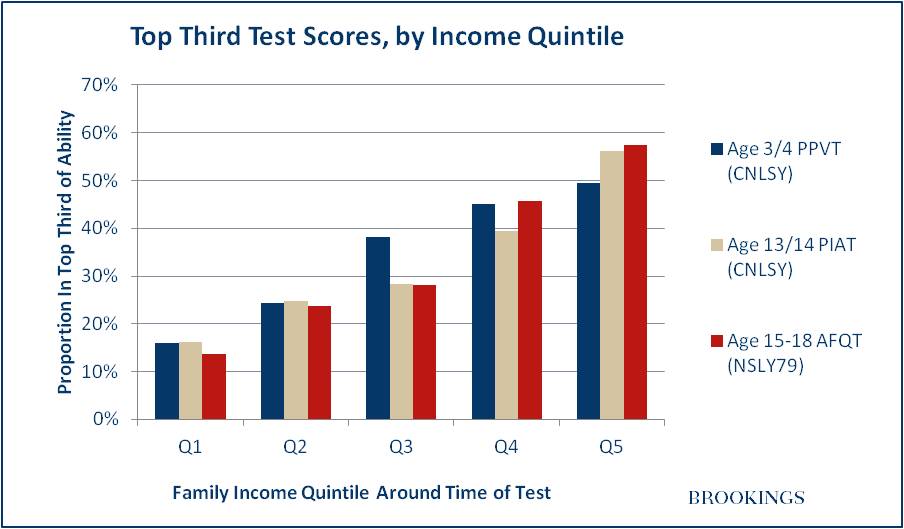 Children from more affluent backgrounds are the A-grade students before school even starts, and then simply maintain their position through the school years. Addressing the divide as early as possible looks necessary, and urgent.

Tomorrow, in Part 2, I’ll have a look at the distribution of the lowest test score results by income background. (Spoiler alert: try holding a mirror up against the graph above.)