Earth Day comes and goes, and it would be nice to be able to say we’ve got this problem licked. But 45 Earth Days after the original April 22, 1970 outpouring, perspectives of our progress toward addressing the critical environmental issues threatening our species diverge starkly. Three groups of opinions can be identified—(1) Ecomodernists, (2) environmental Cassandras, and (3) “social greens”—and their points all matter to develop a positive way forward.

Some observers (such as the self-named Ecomodernists) point to the real progress that has been made: such as on ozone, urban smog, and safe drinking water in the world’s major cities. They point to the incorporation of ecological logic into the decision-making of major corporations and individual lives, and to the need to adopt all kinds of technological solutions available. They warn that overly dire reporting will demobilize people. There are some cases where they are right, and it’s certainly true that people need some good news to keep working on this issue. Catastrophic messages have mobilized and galvanized a slice of the population, but they have not sustained the interest of the broader masses needed to drive society-wide solutions.

The second group includes those who say we are not at all addressing global environmental problems, who point to continually growing material consumption and the accumulation of waste in the atmosphere. Forty-five Earth Days on, we still have not slowed, stopped, or reversed the trend in material and energy consumption—quite the contrary. This point needs some clarification: our economy (as measured by the GDP’s rising line at the top of Figure 1) is “decoupling” from our levels of consumption of natural resources, but the total amount of stuff we are extracting and dumping is not slowing. To the contrary. 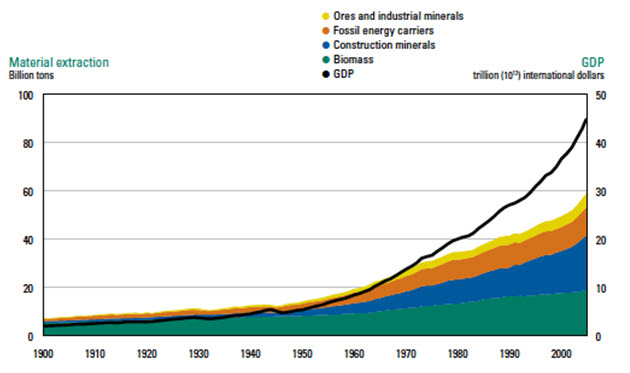 Indeed, as Table 1 shows, while our economy has increased in size by 22-fold since 1900, our use of construction minerals has increased 34-fold, ores 27-fold, and fossil fuels (coal, oil and gas) have seen a 12-fold increase. We use 3.6 times as much biomass—crops, residues, and wood—as we did back then. This is a weak decoupling so far.

Table 1. Changes in the composition of global material extraction

Sadly, it is the same with the gases that are causing climate change (Figure 2). We are not bending the curves the way we need to. 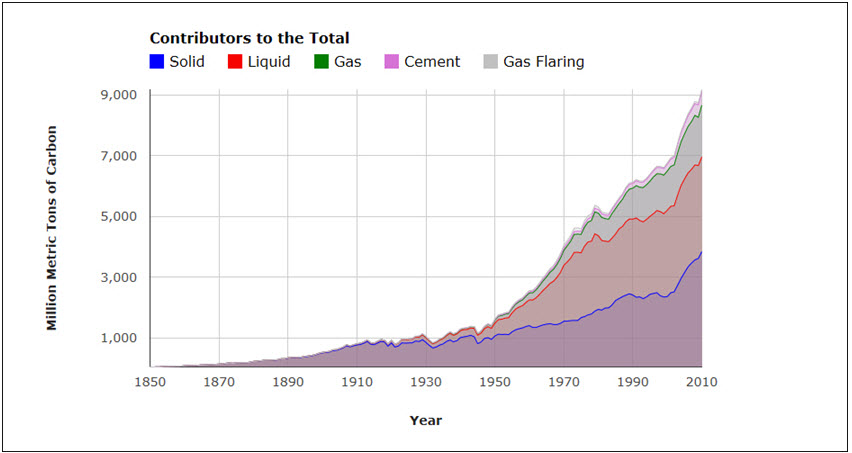 All the material stuff around us make it so we hardly feel anything; if the temperatures rise, we in the wealthier nations simply flip a switch on the air conditioner. More likely, our building temperatures are regulated without us even having to flip any switches. And that brings us to the third group of observers, the “social greens,” who point out the vast inequalities in exposure to environmental “bads” and access to environmental “goods” in the world today. Crucially, when environmental problems are regulated in one place on Earth, they merely shift to other places. Thus nothing gets solved without global action.

With climate change, the world is becoming more inhospitable for people in semi-arid regions, in low-lying coastal communities, and especially in places prone to hurricanes and floods. It’s not just where those types of weather events occur, but how vulnerable the people are who live there. This can mean vast differences in impact: the same hurricane might kill just a few people in Dominican Republic on one side of the island of Hispaniola, and kill thousands in Haiti, on the other side. Our analysis showed that population-adjusted rates of deaths from climate-related disasters varied by over 200-fold across the world’s nations. The difference is that in Haiti there are no more forests to hold the soil and prevent mudslides; they lacked early warning systems to tell people to evacuate; no infrastructure existed to get people out and get emergency workers in; and so on. Having jobs in sectors which are less climate-vulnerable and having diversified economies can sharply lower risks.

So as we think about Earth Day actions, it’s important to get beyond symbolic “greenwashing” efforts. Neighborhood cleanups for Earth Day are important, and I participate in them—they build community and give people a sense of efficacy in the face of terrifying and overwhelming environmental issues like climate change and the unrelenting rise of waste. They certainly make me feel better about my place on the Earth.

But we need to build on local action to refocus our collective Earth Day responses to climate change and other global environmental issues: they simply have not been on the scale needed to address the issues. We need to focus on systemic solutions that build towards longer-term progress. We need focused efforts to help the most marginal societies around the world reduce their vulnerability. This means funding for climate adaptation that is on the scale of the need. It means aggressive reductions in the waste that represent most of our carbon emissions. We probably need carbon taxes, which are emerging as the most logical and small-government ways to create incentives for people to stop overusing a resource that generates negative impacts with its burning. We need a wartime mobilization of programs focused on weatherization of homes and workplaces (including for the poorest among us), climate adaptation assistance, and an Apollo-level effort to innovate our way off of carbon to new zero-carbon energy sources.

To do all this we need the ideas and initiative of all three groups of observers: Ecomodernists, environmental Cassandras, and “social greens.” We can do it, we can see a prosperous and green and just future, and we can start this Earth Day.