The severe drought gripping the Western United States has put a national spotlight on America’s relationship to water. Indeed, the changing landscape of our nation’s water supply necessarily demands a critical look at our water sector and at opportunities to improve the way we regulate, price, and consume water. In this post, we explore the current state of the U.S. water sector and the challenges of a de-centralized system.

Water is vital to the U.S. economy, and its importance extends far beyond the 133 million households that rely on water for consumption and household use. Water is a critical input to the $167 billion agricultural industry—with approximately 55 million acres of farmland irrigated annually. But, water’s importance extends far beyond America’s farms. From power plants to factories to server farms powering information technology, the modern economy depends on water. Unfortunately, our nation currently faces the real and pressing challenge of water scarcity, with potentially severe economic consequences.

Water scarcity presents a significant barrier to sustained economic growth in multiple sectors of the U.S. economy. The sustained drought in California is expected to cost the state’s agricultural sector $2.2 billion in economic losses and more than 17,000 seasonal and part-time jobs. Moreover, the national ramifications of water scarcity are potentially vast: companies in all sectors of the economy are exposed and vulnerable to water-related risks, which include operational slowdowns, high water prices, and regulatory uncertainty.

In a new policy memo In Times of Drought: Nine Economic Facts about Water in the United States, The Hamilton Project brings attention to recent trends in our nation’s supply of and demand for water and describes the importance of an efficient allocation of water resources for economic growth. Through the lens of economic policy, we provide relevant background context to the water crisis in the United States. The memo highlights several economic features of the water scarcity challenge, including high population growth in the areas most vulnerable to drought, the complicated allocation of water across and within industries, and substantial geographic variation in household water pricing and consumption.

The memo highlights some regulatory challenges as well, including the fact that the United States has more water systems than it has schools. The sheer number of distinct water systems—roughly 152,000 systems in total—not only presents complications for regulators, but can also inhibit the diffusion and take-up of new technologies. Small and specialized water systems may lack the institutional capacity to raise the funding necessary for costly repairs and new equipment, or to meet Environmental Protection Agency regulations. Small water systems would likely benefit from new technologies. For example, the smallest water systems (those serving 500 or fewer people) were responsible for approximately 74,000 water quality violations, more than two thirds of total violations. 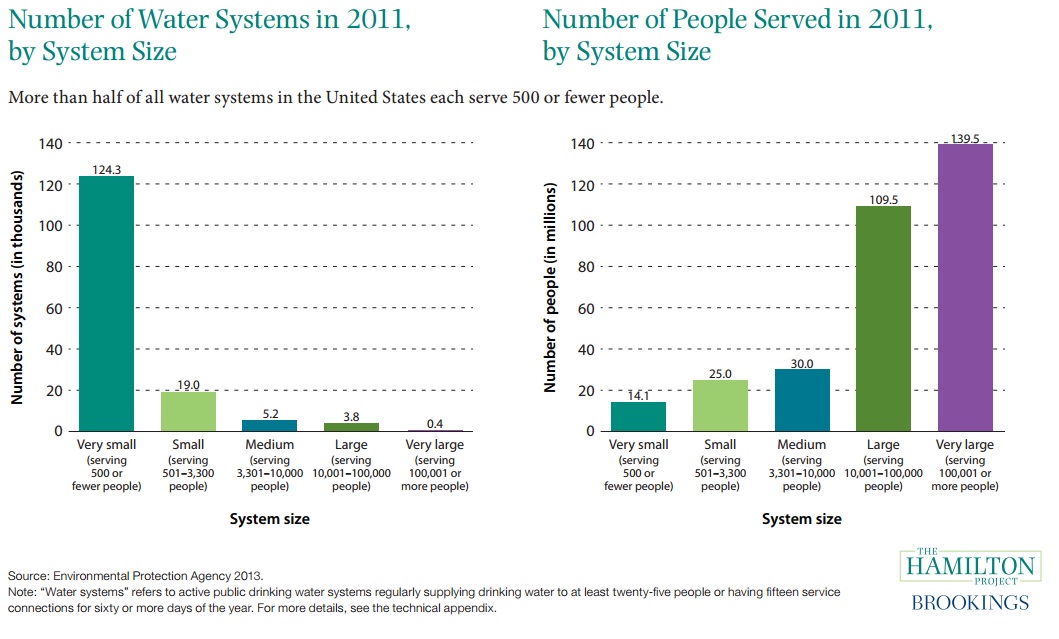 Water systems vary in both size and function, reflecting differences in the population and the diversity of economic sectors they serve. Indeed, relatively few large water systems serve the bulk of the U.S. population, while many smaller systems serve a minor share of the population (see figure 1). About two thirds of U.S. water systems are seasonal or do not serve the same population year-round; these include camp grounds and gas stations, among other idiosyncratic systems. The remaining 51,000 or so water systems—Community Water Systems—are permanent and provide water to at least twenty-five people, and typically far more. Complicating this scenario is the fact that each water system has its own regulatory oversight and financing structure.

Recognizing the importance of water for the U.S. economy, and the many and varied policy challenges and opportunities in the sector, The Hamilton Project has partnered with the Stanford Woods Institute for the Environment to address the emerging water crisis and discuss new policy ideas that may help to mitigate the crisis. We will release two new policy papers. A paper by Peter W. Culp of Squire Patton Boggs (US) LLP, Robert Glennon of the University of Arizona, and Gary Libecap of the University of California at Santa Barbara proposes the establishment and use of market mechanisms to encourage reallocation and trading of water resources. Another paper by Newsha K. Ajami and Barton H. Thompson Jr. of the Stanford Woods Institute for the Environment and David G. Victor of the University of California at San Diego proposes promoting more innovation in the water sector through pricing and regulatory reform.

The new proposals will be discussed on October 20th during a joint forum at Stanford University. Facebook Chief Operating Officer Sheryl Sandberg will give welcoming remarks, followed by an overview of the event by former U.S. Treasury Secretary Robert E. Rubin. California Governor Jerry Brown will give featured remarks on the landscape of water in the West, followed by three distinct panels of experts discussing opportunities for developing water markets and for promoting investments in water innovation, as well as the impacts of climate change on water resources. The full agenda can be found here; registration for a live webcast of the discussion can be found here.