At the Organization of American States (OAS) General Assembly session in the Dominican Republic last week, acrimonious debates among the member states over how to approach the crisis in Venezuela were upended by a surprise announcement of a relaunched bilateral dialogue between the United States and Venezuela. This comes on the heels of multiple international efforts to promote dialogue in Venezuela, including by an UNASUR-sponsored team of former presidents, quiet diplomacy by the Vatican, and a call for dialogue from OAS member states via a June 1 resolution. Even OAS Secretary General Luis Almagro, deeply critical of Venezuelan President Maduro’s authoritarianism, has called for dialogue on the release of political prisoners, humanitarian assistance, and a prompt convening of a recall referendum called for by the Venezuelan opposition.

Of course, everyone favors dialogue as the preferred option to solving Venezuela’s political and economic crisis. The alternative to dialogue is already upon us: growing reports of looting, social unrest, and government repression in this increasingly hungry and violence-wracked nation. And a deadlocked political system in which the executive branch wields its control over the Supreme Court like a club to beat down any dissent and limit any efforts by the opposition-controlled Congress to legislate.

But there are good reasons to be skeptical that dialogue will work at this time. First and foremost, the Venezuelan government has very rarely sustained or followed through on previous dialogue attempts during other governability crises, even as recently as 2014. The opposition’s Mesa de Unidad Democrática (MUD) is also wary of engaging in a dialogue because it could be used by the government to “buy time” to delay the recall referendum the MUD requested. After all, polls suggest that if presidential elections were to happen this year, the opposition would probably win and remove President Maduro from power. A change in government—the first best outcome for the opposition—or alternatively forming a unity government, likely would not happen through dialogue. This is because some members of the current Venezuelan regime cannot afford to share power for fear of losing impunity and facing accountability for crimes they have committed, ranging from human rights abuses to corruption.

Time also runs against the Venezuelan people, as the country faces the worst humanitarian crisis in its modern history. This crisis is rooted in almost two decades of irresponsible policies, which led to scarcity of food, basic goods, and medicine as the price of oil—Venezuela’s largest and almost only export—declined. In the absence of enough foreign currency to import raw materials and finished products, a much-diminished domestic private sector—after a decade of tight controls and expropriations—is unable to satisfy local demand. Given Venezuela’s isolation from global financial markets due to high sovereign risk levels, the solution to this crisis would require a large rescue package and debt restructuring efforts in coordination with bilateral, multilateral, and international funding sources, such as the International Monetary Fund (IMF). The current regime, however, seems reluctant to reach out to these non-conventional sources of funding, since it would imply accepting their policies, bankrupting what otherwise could be a rich and prosperous country.

An economic adjustment plan might raise deep concerns on the Venezuelan streets, as international bailouts typically involve severe austerity measures that bring back bad memories of structural adjustment plans in the region during the 1980s and 1990s. But in fact, severe austerity measures have already been put in place, de facto, by the Venezuelan regime: Imports have fallen by more than half this year, greatly reducing consumption levels, and strong energy rationing is already in place. Accessing foreign funding as part of a recovery plan is critical, since it would allow restoring imports to a level that would relieve the ongoing humanitarian crisis. This, in turn, would help to stabilize the economy by slowing down monetary expansion, returning inflation to manageable levels. 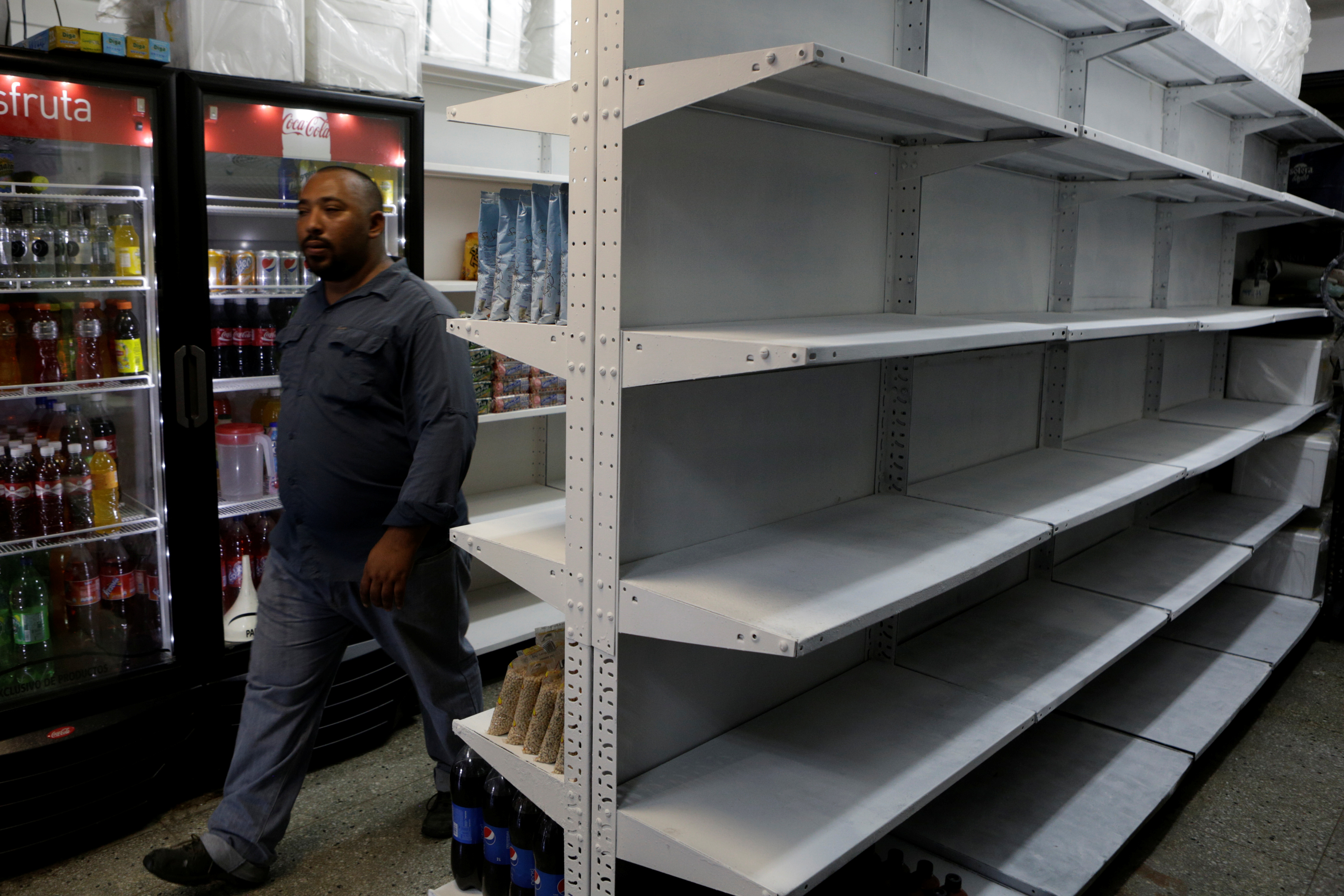 A man walks past empty shelves at a supermarket in Caracas, Venezuela, May 16, 2016. Photo credit: Reuters/Marco Bello.

In the absence of dialogue, then, what are the scenarios for Venezuela looking forward? Certainly, President Maduro’s inner circle would like nothing more than to stay in power, hoping that rebounding oil prices and the prospects of renegotiating a loans-for-oil arrangement with China will provide the regime with some breathing room. While trying to manage the crisis, the government will likely keep maneuvering to delay any recall referendum until after January 10, 2017, the halfway mark of President Maduro’s term. Under Venezuela’s constitution, a successful recall held after that date would put the vice president in power for the rest of Maduro’s term. A regime led by a Chavista successor would assure impunity until the next presidential election in 2019—or so those in government think.

For the opposition and its supporters in the international community, a recall referendum this year offers the best way forward for Venezuela, one that is firmly grounded in and legitimized by the country’s own constitution. They argue that only new elections can create the conditions for implementing sane, reasonable, and credible economic policies.

[A]uthoritarian regimes will not make concessions unless the alternative, the status quo, is even more costly.

But from what we know of past efforts to restore democracy across the region, authoritarian regimes will not make concessions unless the alternative, the status quo, is even more costly. And President Maduro still acts as if he has lower-cost alternatives in the form of potential new credit lines from China (either new loans or more favorable terms on existing debt) or even a further contraction in imports and consumption in Venezuela (further deepening an already profound humanitarian crisis). He may also hope that the recent modest rise in oil prices will be sustained, offering the regime some breathing room. We also know from the past that—absent the complete collapse of the authoritarian regime—another condition for a successful restoration of democracy is that a critical mass on both sides of the political spectrum reach a minimum common understanding of the rules of the game, including a vision for a future in which neither side faces an existential threat to their core interests. This seems implausible in today’s Venezuela. There seem to be no moderates on the government side that have voice or influence over political outcomes in Venezuela, which is the main obstacle to successful dialogue. The radicals in charge of Venezuela’s government have a vested interest in shutting down space for serious negotiations.

Unfortunately, if present trends continue, Venezuela is likely to become increasingly ungovernable, with more frequent violent protests in the streets. If civilian unrest increases and the police and Guardia Nacional (national gendarmerie) are overwhelmed, the Army may be forced to choose between obeying orders to engage in repression (something that has negative historical and institutional associations for the military, since it participated in putting down violent urban unrest during the 1989 “Caracazo”) and staying the barracks. Either way, military officers, who already play a key role in ministries and state industries, social missions and food distribution networks, and state, local, and communal government, will be drawn directly into national politics. In a region that has worked so hard to limit the role of the military, this would be a regrettable outcome. In the worst case scenario, the military might even engineer a transfer of power to a new leadership that is better able to protect its institutional interests. 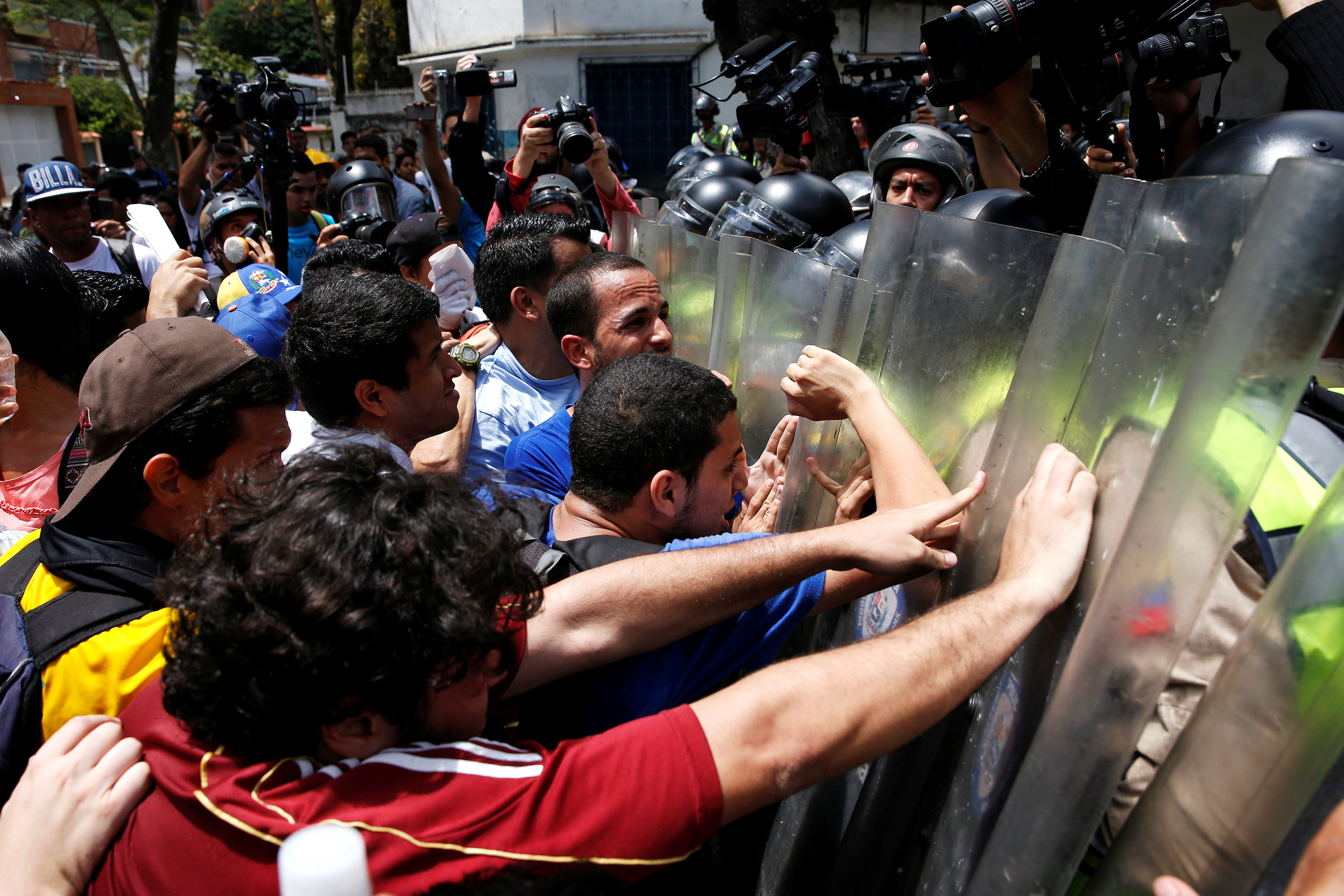 Pressure by other means

What can the international community and the United States do to promote peace and democracy in Venezuela? The U.S. offer to engage in bilateral dialogue may not lead to substantive outcomes, but it short-circuits the confrontational dynamic that Venezuela so often attempts to foster in multilateral forums. Other parallel efforts may also not produce immediate results, but they need to be available so that moderates in Venezuela have options for dialogue once enough people in the present regime see restoring democracy as a less costly option than maintaining the status quo. This should lead international supporters of democracy in Venezuela to look for fresh opportunities to raise the cost of the authoritarian status quo for the Maduro regime, as well as for other governments in the region that would rather look the other way. For this reason, the vote on invoking the Democratic Charter at the OAS is important regardless of the outcome. After ignoring the crisis in Venezuela for all too long, the region’s presidents deserve to be put on the spot and explain—both at home and abroad—why they continue to countenance growing authoritarianism in Venezuela.

There seem to be no moderates on the government side that have voice or influence over political outcomes in Venezuela.

Beyond diplomatic and political efforts, there should be a concerted effort to ensure that Venezuela’s access to fresh international capital is based on a realistic plan to restore economic stability. This means talking seriously with the Chinese about the situation in Venezuela. Chinese policy banks have already provided at least $60 billion in loans to Venezuela in return for future oil shipments (some of which may have been repaid already). Due to Venezuela’s inability to increase production enough to offset the drop in the price of oil, Chinese officials are in discussions about rescheduling Venezuela’s current loan payments. This could potentially provide the Maduro administration the fiscal space to double down on the status quo.

But interestingly, there is some evidence that China is preoccupied with the prospects of the present regime and is pursuing dialogue with Venezuela’s opposition about the future of China-Venezuela relations. China’s new-found concern may provide an opportunity for the U.S. government to explore expanding the range of international stakeholders in a solution to Venezuela’s crisis. After all, it is in China’s interest for Venezuela’s economy to resume functioning (if only so China can be paid back), and it is in the U.S. interest that Chinese loans contribute to solving Venezuela’s crisis rather than allowing a desperate regime to hang on to the status quo. While the United States and China may have disagreements, both would benefit from improved governance and rule of law in Venezuela, as would Venezuela itself.