In the last couple of months, more than half a million Syrian refugees and irregular migrants have poured into the European Union (EU). The bulk of them came from or through Turkey via the Aegean Sea, relying on criminal networks set up by human smugglers. The sheer number of arrivals deeply strained the EU’s capacity to cope with the crisis.

This influx was a wake-up call for EU member states, which now openly recognize the role Turkey can play in helping them cope with the crisis. Last week, EU leaders adopted an action plan that aims to stem the flow of Syrian refugees and irregular migrants, primarily by increasing cooperation with Turkey. The document was the final product of intense diplomatic activity. In an effort to ensure the implementation of this plan, German Chancellor Angela Merkel paid a highly-controversial personal visit to Turkish President Recip Tayyip Erdoğan and Prime Minister Ahmet Davutoğlu on Sunday, promising to speed up the process for Turkey to join the EU. The visit—which was criticized across Europe—came just ahead of the Turkish elections, scheduled for November 1.

What are the politics behind this agreement? And, will this new effort benefit the Syrian refugees?

First and foremost, the plan demonstrates the willingness on both sides to transform the earlier, fruitless “blame game” into greater pragmatism. Remember that Erdoğan had accused the EU of turning a blind eye to Turkey’s efforts to care for more than two million refugees, even claiming that European leaders had turned the Mediterranean into a mass graveyard. In turn, the leadership in Brussels asserted that Turkey was deliberately opening the floodgates. The Western media circulated stories accusing the Turkish government of looking the other way as a lucrative smuggling business flourished in major port cities.

Europe’s motivation is clear: The rising xenophobia across the continent, coupled with the introduction of stricter border controls, raised the fear of having to suspend the right to borderless travel within the Schengen zone, one of the most important achievements of European integration.

From the Turkish perspective, it seemed like cooperating with the EU could open the possibility of obtaining visa liberalization for its nationals wishing to travel to the EU—a long-standing demand of the Turkish government and citizens—as well as reviving Turkey’s accession process into the union. Of course, the fact that concessions extracted from the EU on these two issues could be translated into political capital just two weeks ahead of national elections must have provided an additional incentive for the Turkish government.

However, it is not clear whether this convergence of interests will actually benefit the refugees on the ground.

The first part of the action plan pledges the EU’s financial support to Turkey in hosting Syrian refugees, and states its intention to allow for the resettlement of some of those refugees in the EU. In return, beyond what it is already doing with respect to partial access to health and education, Turkey is expected to open up the employment market to refugees—a highly sensitive and controversial issue across the Turkish public. Turkey is also expected to take a more extensive series of measures against irregular migrants, including improving its capacity to combat human smuggling and implementing the Readmission Agreement of 2013 (which would enable EU member states to send irregular migrants back to Turkey.

Of course, the extent of Turkey’s cooperation is contingent on progress made on the visa liberalization dialogue as well as EU financial contributions. For the visa issue, it’s a sequencing challenge: The EU wants to first see the actual implementation of the readmission agreement, while the Turkish side wants to first see progress on visa liberalization for its nationals. In a relationship that has long been characterized by mistrust, it is not surprising that it is not yet clear how the sides will break through this deadlock. 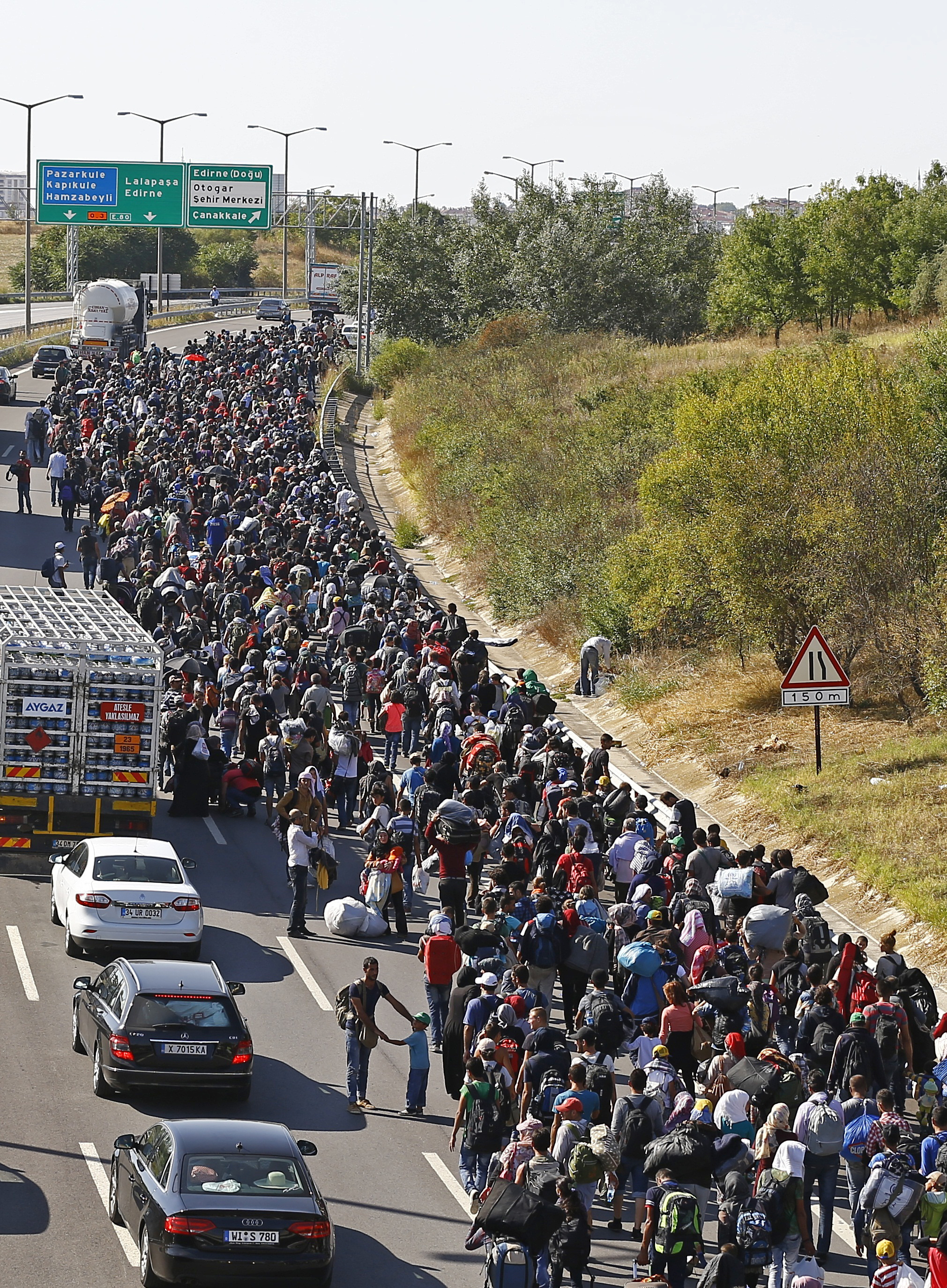 Migrants walk towards the Greek border on a highway near Edirne, Turkey. Photo credit: Reuters/Osman Orsal.

Mutual mistrust is also a big impediment. The Turks wonder whether a recession-stricken EU will indeed be able to allocate the funds it had promised. While Merkel has noted that nothing short of 3 billion euros should be mobilized for Turkey, the action plan omits any details on specific amounts. According to the final version of the plan, funds will be mobilized through the EU Trust Fund for the Syrian crisis, which now contains only 500 million euros for the countries hosting the refugees—less than half of the 1.1 billion euros the leadership in Brussels originally promised Turkey.

Turkey has now spent close to $8 billion for Syrian refugees. As its leaders have repeatedly pointed out, the international contributions directly to the Turkish government have been less than half a billion, with the EU’s share constituting of only a third of this sum. Since Turkey has been asking for assistance for at least three years—with meager results—it is no wonder that Turkey is skeptical of the latest promises.

The plan is also extremely vague about how many Syrian refugees might be resettled from Turkey. Antonio Guterres, the U.N. high commissioner for refugees, has begged Europe for years to do its share in resettling Syrian refugees from Jordan, Lebanon, and Turkey—mostly to deaf ears. By the time the European refugee crisis erupted in August, less than 8,000 Syrian refugees had been resettled in EU countries since the Syrian civil war began in 2011. That’s not a particularly robust manifestation of solidarity.

After considerable contestation, the EU did agree last month to resettle 120,000 refugees across member countries; however this decision did not include resettling any refugees currently in Jordan, Lebanon, and Turkey—only those who had already made their way to Europe. Even the 120,000 figure pales in comparison to the 4 million refugees in the region and the 800,000 to 1 million which Germany has said it will take.

A new chapter in Turkish-EU relations?

Overall, then, the picture is not very promising. But the very fact that the EU and Turkey were able to reach an agreement at all is evidence that pragmatism may eventually prevail, and that would benefit both. Europe would help Turkey cope with the growing challenges of dealing with millions of refugees, and Turkey would feel that finally some real burden-sharing is occurring. The EU would benefit, too—not only by the influx of refugees being stemmed, but also because it could repair some of the damage that its “Fortress Europe” policies inflicted on its soft power credentials.

And, most importantly, Syrian refugees and the very notion of international solidarity and burden sharing would win too. By moving beyond the blame game and giving pragmatism a chance, Turkey and the EU might set a precedent for cooperation on other, broader issues. As far-fetched as it might be, pragmatism could open the way to revisiting Turkey’s accession process with a constructive spirit. It could also help both sides address the bigger challenge of finding a solution to the actual root cause of the Syrian refugee crisis.

In the meantime, the United States and other world powers have an interest in cajoling both Turkey and the EU into giving life to the new action plan—it’s the best step forward in the daunting project of providing a viable future for Syrian refugees.