Global governance does not always deliver on promises of security or justice. This is in spite of growing efforts since the end of the Cold War to establish and hold actors accountable to international norms. And evolving regimes that seek to manage the otherwise chaotic nature of global politics, security, and justice have seen mixed success.

As Secretary Madeleine Albright asserted at the inaugural Madeleine K. Albright Global Justice Lecture in The Hague this week, the difficult problems we grapple with today sit at the “messy intersection” of justice and security. Insufficient attention is given to the importance of justice, which is vital for ending conflict and thus establishing security and stability. However, as Secretary Albright noted, institutions focused on justice can sometimes be “overly legalistic” and fail to “implement concrete efforts to forestall or end wars.” As such, incorporating security into our thinking about justice mechanisms can help lead to more practical approaches and institutions. 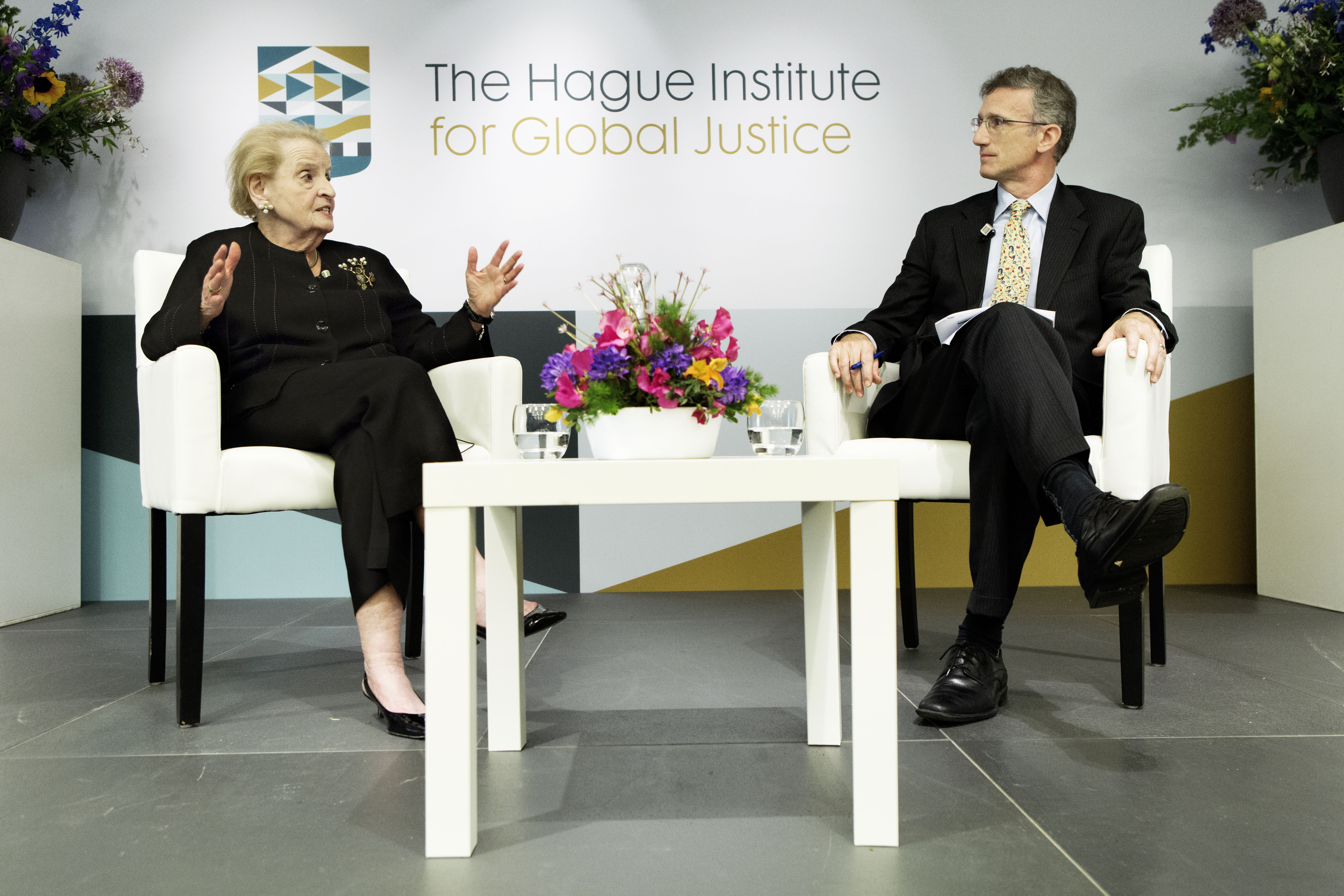 Photo courtesy of The Hague Institute.

The recent failure of the South African government to detain Sudanese President Omar al-Bashir pursuant to the International Criminal Court’s (ICC) outstanding arrest warrant is the latest illustration of this tension between security and justice. The ICC’s prosecutions—which almost exclusively target African situations, often at the request of African states—have become more politicized. Its targets have included sitting heads of state like al-Bashir and Kenyan President Uhuru Kenyatta for crimes such as (in the Sudan case) genocide, crimes against humanity, and war crimes.

The Zuma government in South Africa—which is party to the Rome Statute—chose not to arrest al-Bashir this week. This was in contravention of an order from the country’s High Court and in spite of pressure from civil society and its treaty obligations. Problematically, the African Union asserts that sitting heads of state should be immune from ICC prosecution. The dilemma reveals the inescapable specter of the politics of justice and the question of timing—as Ted Piccone asked of Secretary Albright: “is justice delayed justice denied?” Or can the pursuit of justice be staged out while still resolving the conflicts that triggered the crimes in the first place?

The South African case is merely the most recent in a litany of failures by states (especially, but not exclusively, global swing states like South Africa) to take the lead in establishing, respecting, and enforcing international norms to which they have committed. Global institutions aimed at elevating human rights abuses and enforcing justice—such as the U.N. Human Rights Council, the ICC, and the U.N. Security Council, among others—have been hobbled by states that favor strategic autonomy and narrow self-interest over liberal internationalism . We see this in Syria, where mass violence and displacement rage on while Russia and its friends block U.N. action; in Ukraine where President Putin has not been held to account for his annexation of Crimea; and in Libya where the international community largely cut its losses and ran away.

Paralysis in the international community

All this plays out to the horror of a seemingly paralyzed international community hamstrung by geopolitics. There has been a breakdown in consensus on the responsibility of governments to protect civilians. Meanwhile, there is a limited understanding of the irrefutable linkages between global justice, peace, and security.

Global swing states like India and Brazil have an opportunity to exhibit leadership and hold others accountable for such flagrant abuses, helping to deliver justice to victims and thereby build a more just and peaceful world. It would probably help their cause for a better seat at the global power table as well. The question is whether they will step up to share this burden or hide behind the tarnished shield of state sovereignty and non-intervention. Surely, the United States and Europe should not carry the load on their own. If other democracies committed to the rule of law do not join forces in securing justice, who will?

As Secretary Albright said at this week’s event, “the world is, to put it mildly, a mess.” The challenges are unprecedented in their complexity and reside mainly at the nexus of justice, rule of law, and security. In order to address the very difficult issues before them, policymakers need a firmer understanding of our collective global history and the contradictions in the international system that have led us here. They must also bear in mind the inextricable linkages between security and justice. As Secretary Albright reminded us, “justice broadens our understanding of true, lasting security by infusing it with principles of fairness, equality, and inclusive governance.”

Policymakers around the world have their work cut out for them in tackling the greatest challenges of our time, but with some political will, an activist civil society and enlightened leadership, they may just make some headway.

The Madeleine K. Albright Global Justice Lecture hosted in The Hague and the Justice Stephen Breyer Lecture on International Law hosted in Washington, D.C. are products a partnership between the Brookings Institution and The Hague Institute for Global Justice to explore contemporary challenges in global affairs at the nexus of justice and security. The annual Madeleine K. Albright Lecture was inaugurated in The Hague in 2015  and the annual Justice Breyer Lecture was inaugurated in Washington, D.C. in 2014 and continued in 2015.