Have you heard that smart is the new cheap?

According to “The Smartest Places on Earth: Why Rustbelts Are the Emerging Hotspots of Global Innovation,” a new book by Antoine van Agtmael and Fred Bakker, once-mighty industrial cities, decimated by their manufacturers’ flight to cheap labor, are leveraging their knowledge assets to thrive as newly emerging “brainbelts.”

On April 6, the Centennial Scholar Initiative and the Metropolitan Policy Program at the Brookings Institution hosted an event featuring a presentation by van Agtmael and a panel discussion that included both authors, Rebecca Bagley, the vice chancellor for economic partnerships at the University of Pittsburgh, and Bob Geolas, president and CEO of Research Triangle Park in North Carolina. Here are some of the key points from van Agtmael’s presentation. 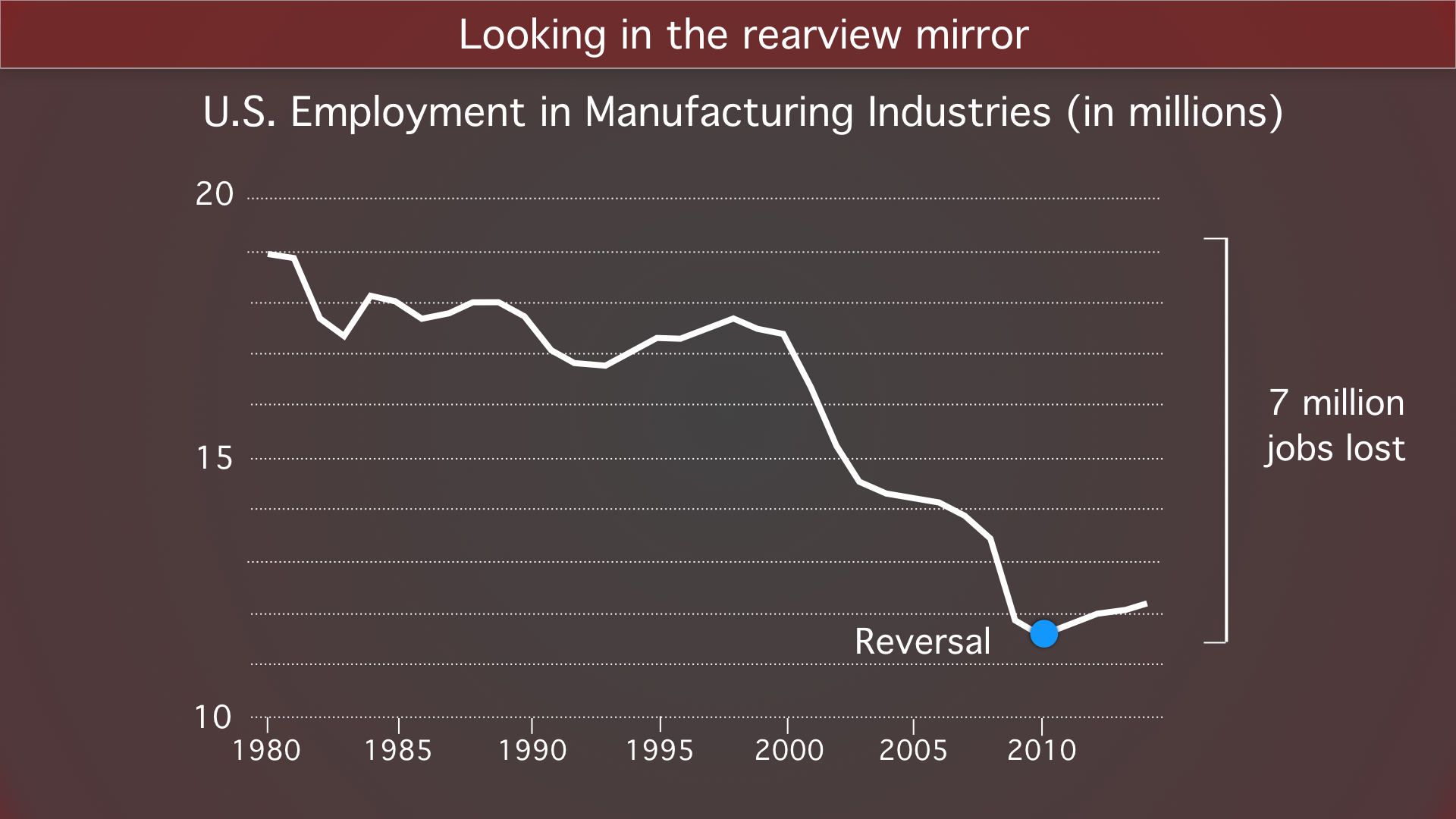 “If you look in the rearview mirror, things look bleak.”

“The Smartest Places on Earth” is an optimistic book—it describes a newfound economic vibrancy that has emerged in a number of American and European cities and details a new paradigm of competitiveness taking root across the world. It offers a positive view that contrasts sharply with much of the rhetoric in the current presidential campaign.

From rustbelts to the ‘smartest places on Earth’

The smartest places on Earth: Why rustbelts are the emerging hotspots of global innovation

But we can’t begin a positive conversation without acknowledging the 7 million manufacturing jobs lost between 1980 and 2010 and the decimation of industrial centers across the United States and Europe. Workers have grounds for feeling displaced and wary. Though manufacturing jobs began to rebound in 2010, we are still millions of jobs short of our manufacturing employment numbers just 15 years ago. 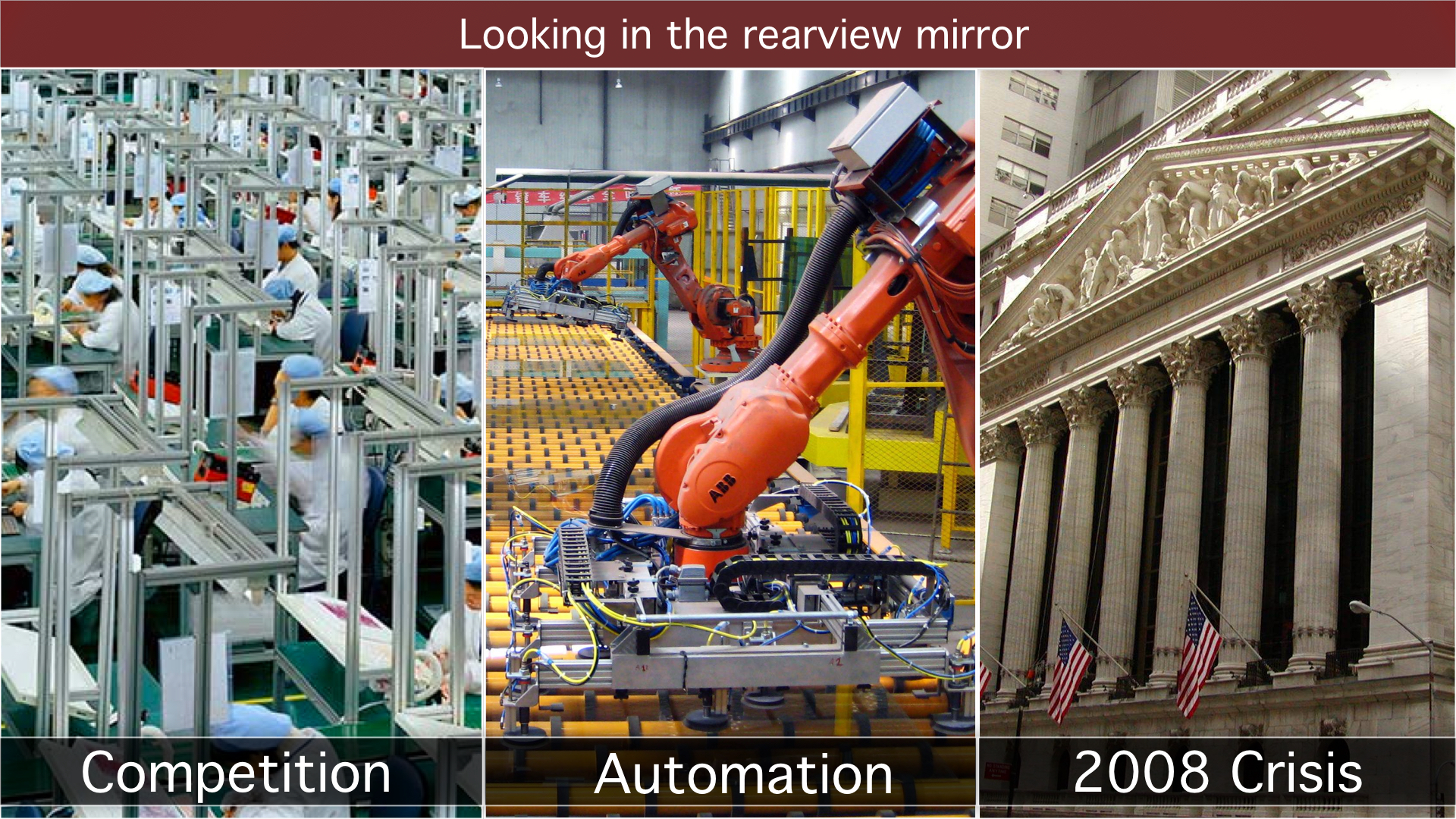 Competition from the developing world was a significant contributor to manufacturing job losses in the United States and Europe, but it wasn’t the whole story. Automation—and the productivity gains that have come with it—has also been a major factor. The 2008 recession was also hugely damaging to manufacturing sectors. 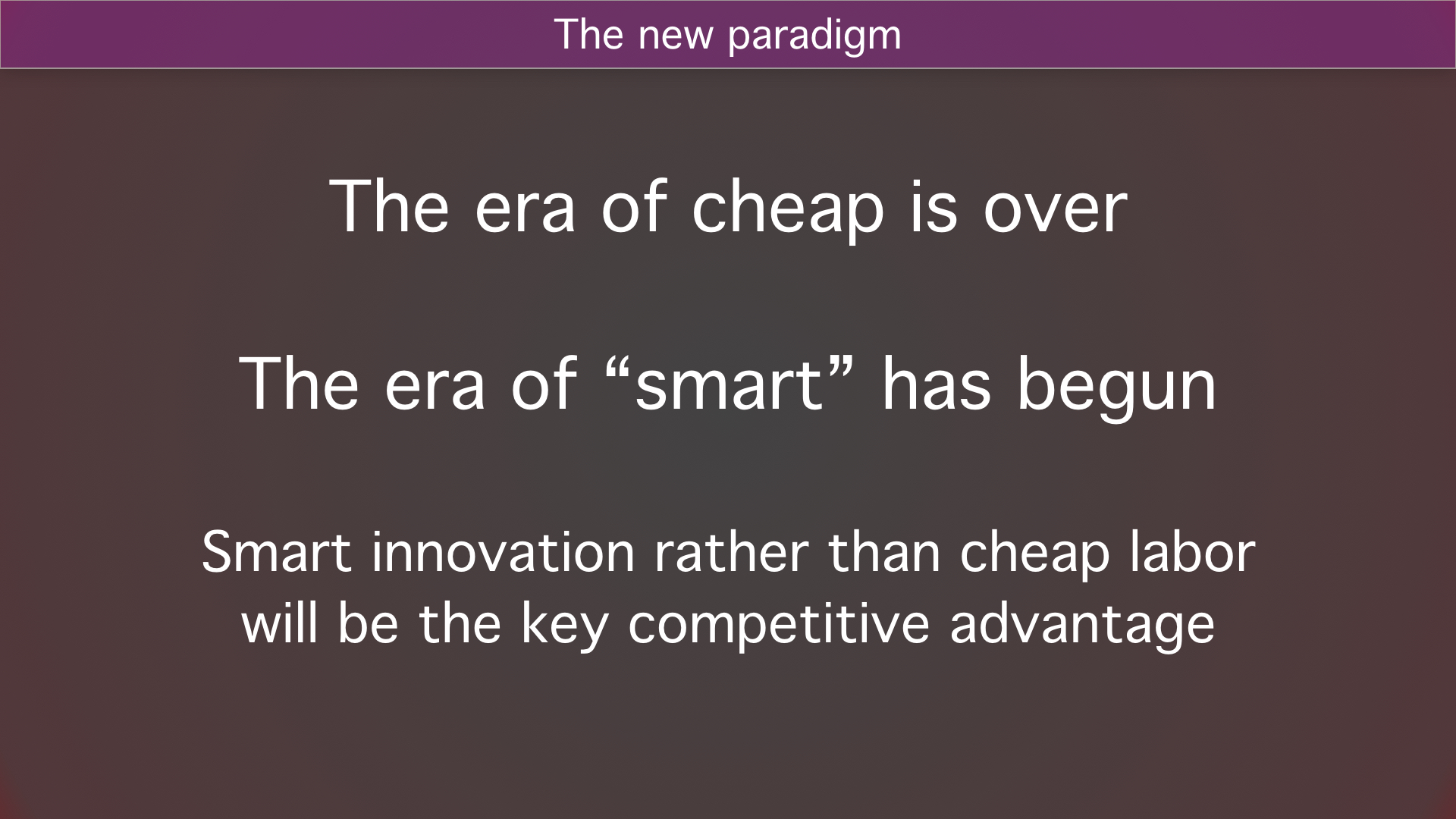 “Now, when I go to Asia, I hear them complain about American competition…I hadn’t heard that in thirty years. They simply cannot keep up with American innovation.”

The common narrative in the United States and Europe is that our economies are in decline. In van Agtmael and Bakker’s view, the opposite is true—the economies of the United States and Northern Europe are actually regaining competitiveness. That is because the nature of international competitiveness is changing. Gone are the days when cheap products ruled. Smart products—ones that integrate physical production and software—are primed to dominate international markets in the 21st century. In the authors’ view, the ability to innovate and create the smart products of the future will replace cheap labor as the most essential competitive advantage. This dynamic currently favors the United States and Northern Europe. 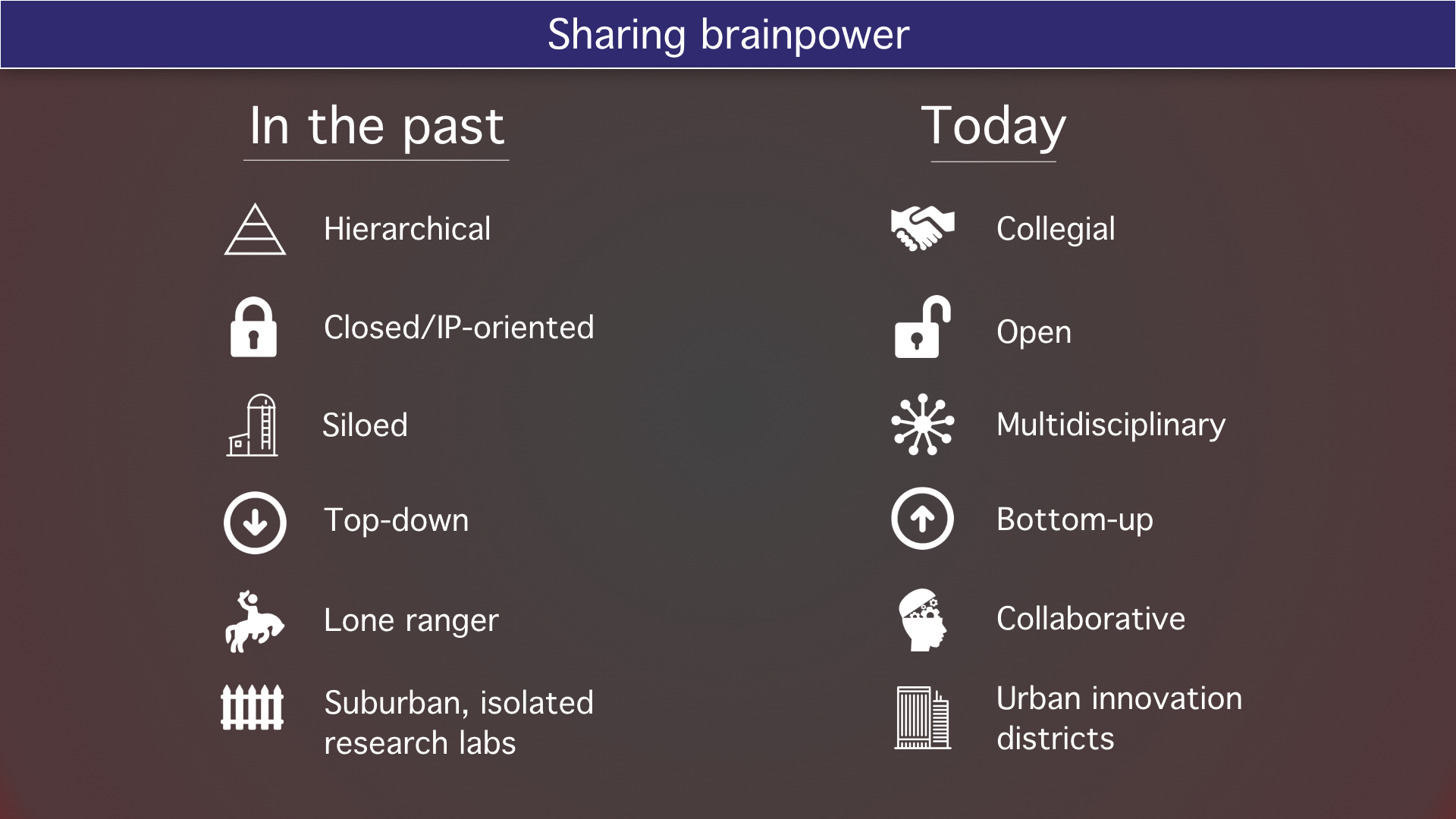 Van Agtmael and Bakker identified two pillars driving the changing paradigm of international competitiveness. The first is a phenomenon they refer to as “sharing brainpower.” In their view, the culture of innovation and entrepreneurship has changed dramatically over the past decade or so. Innovation used to be highly hierarchical, siloed among disciplines, and often driven by one or a few people at the top of an organization (or cooped up in a garage). Today, innovation tends to be highly collaborative, multidisciplinary, and driven from the bottom up, primarily because most cutting-edge activity is no longer happening within the academic or scientific disciplines—it is happening between them. Scientists and engineers in the past might have been able to advance their respective fields working in isolation, but today the most exciting discoveries are being made in the space where the disciplines intersect. As such, it is imperative for a wide range of talented workers to interact and collaborate.

This new dynamic has manifested itself in the physical spaces where innovation is taking place. Where innovation used to be cordoned off in suburban research labs that discouraged the cross-pollination of ideas, it is now frequently happening in urban innovation districts or reimagined research campuses (like Research Triangle Park) that are purposefully designed to foster collaboration among scientists and researchers. 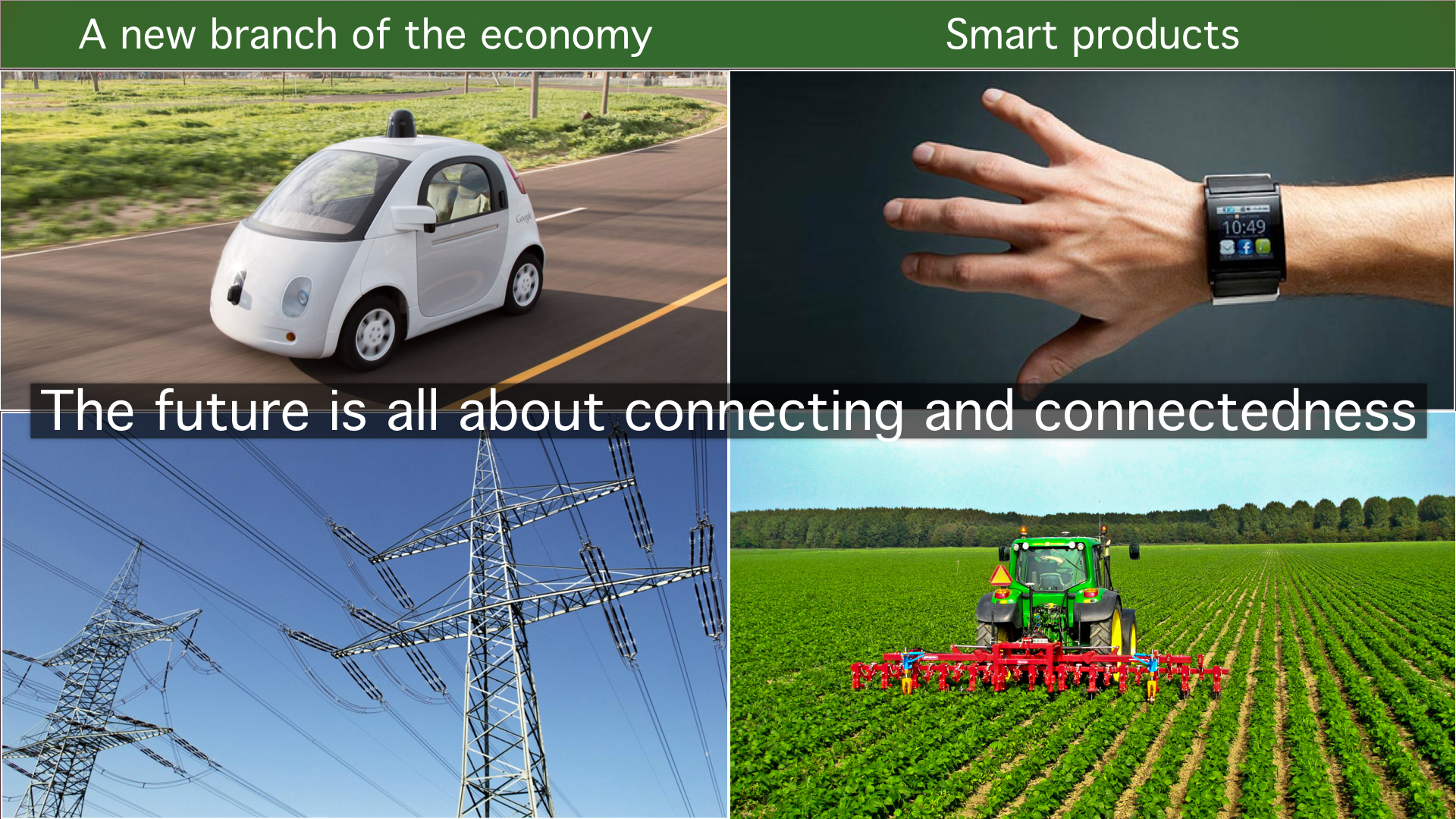 “We have created a whole new branch of the economy”

As manufacturing and software have converged, an entirely new generation of products is being created. The firms creating these products are finding it advantageous to co-locate physical production and information technology expertise. North America and Europe, rather than Asia, have taken the lead in creating these smart products through a combination of the knowledge retained from an industrial past, an international dominance in software and information technology, the development of new production methods and new materials, and the ongoing scientific discoveries being made in our world-leading universities and research institutions.

In van Agtmael’s view, these smart products have the potential to transform entire industries. Transportation will be revolutionized by driverless cars. The health care industry will be upended by wearable (or even ingestible) devices. The way we create and distribute energy will soon be unrecognizable due to next-generation batteries and smart electrical grids. Even agriculture is likely to be transformed by “smart farming.” 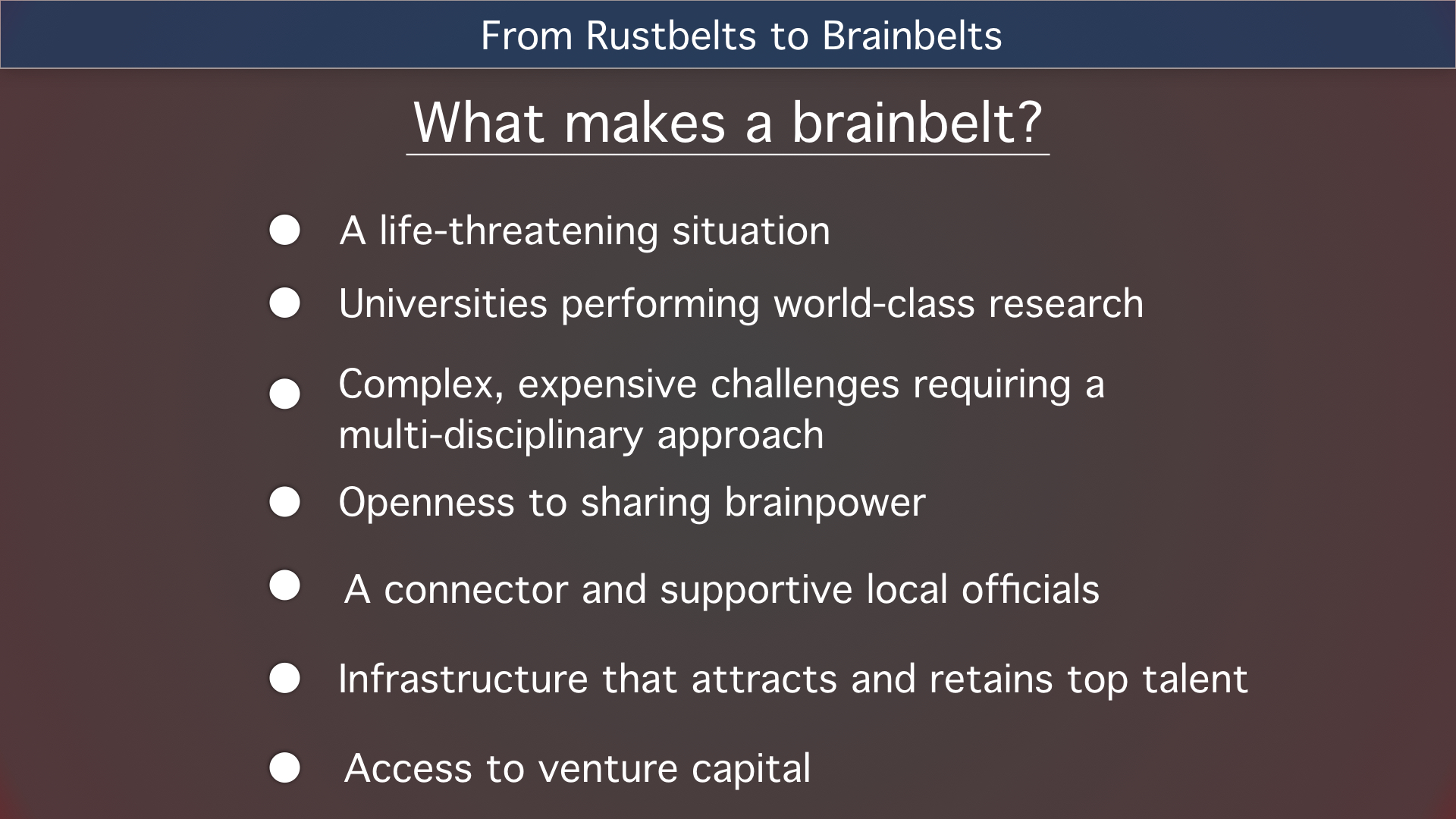 “Would you have thought that Akron was one of the smartest places on Earth?”

Some of the most innovative cities on the planet are in unexpected places. Akron, Ohio, for example, is an emblematic rustbelt city that has transformed itself into a high-tech “brainbelt.” Akron was once home to the four largest tire companies in the world, and once the tire companies left, the local economy was decimated. But incredible scientific expertise remained. Thanks to a leading research institution, a determined connector (former University of Akron president Luis Proenza), and a rich ecosystem of talented workers, the city is now a world leader in advanced polymer technology. According to van Agtmael, its scores of polymer companies now employ more people than the big four tire companies in their heyday. Similar stories have emerged in other cities across the United States. Albany, N.Y., has become a world-class nanotech hub, and Research Triangle Park, N.C., is at the cutting edge of life sciences and new energy technologies. Pittsburgh, Pa., Portland, Ore., Rochester, N.Y., and many others have also turned an industrial past into a high-tech future. As van Agtmael demonstrated, all of these places share certain characteristics. 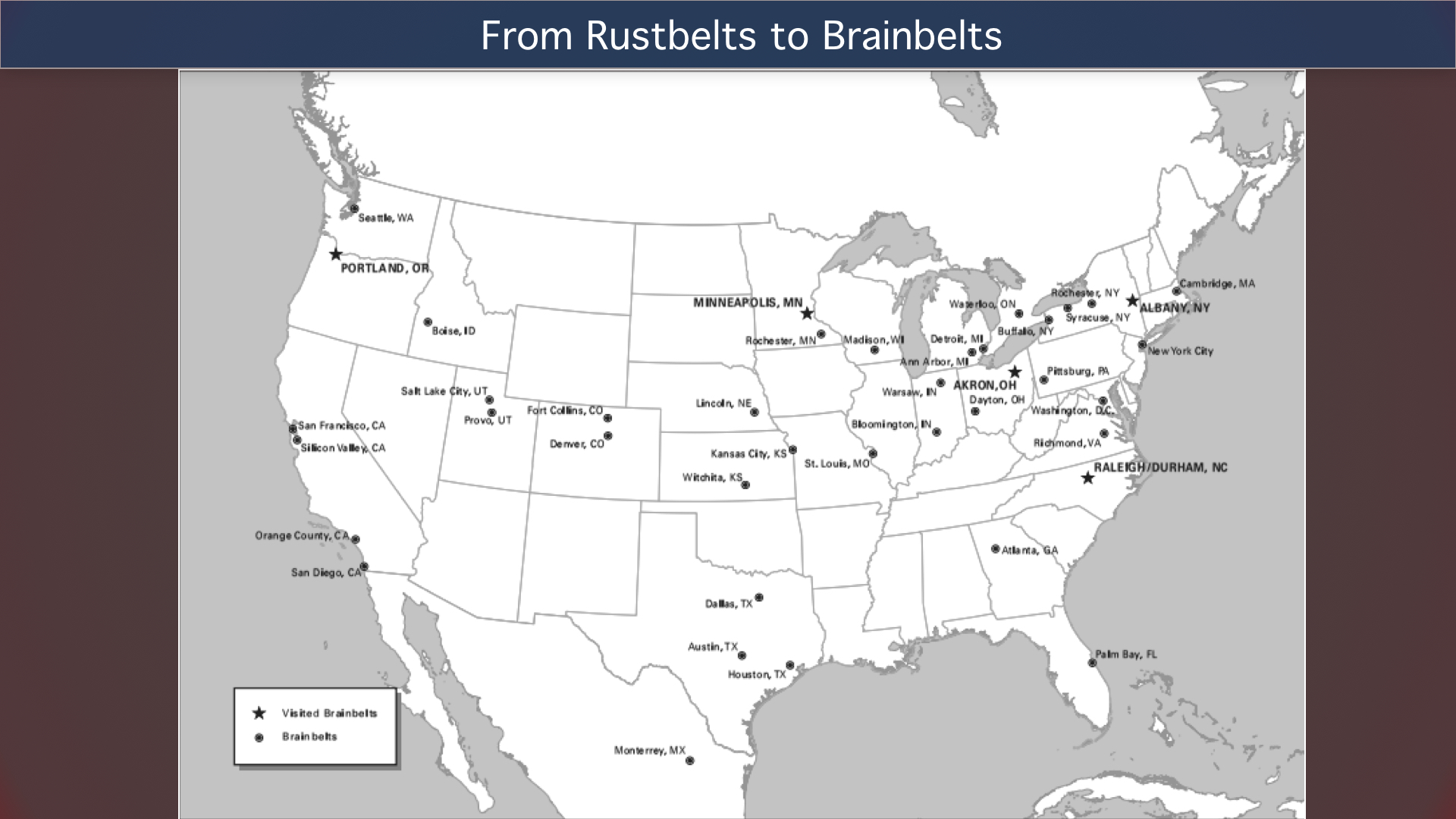 “Collaborative innovation is no longer limited to places like Silicon Valley and Cambridge.”

More than 30 cities in the United States fit van Agtmael and Bakker’s criteria for a brainbelt—and they aren’t just on the coasts. Places like Syracuse, N.Y., Bloomington, Ind., Fort Collins, Colo., and Boise, Idaho have emerged as internationally competitive innovative places. 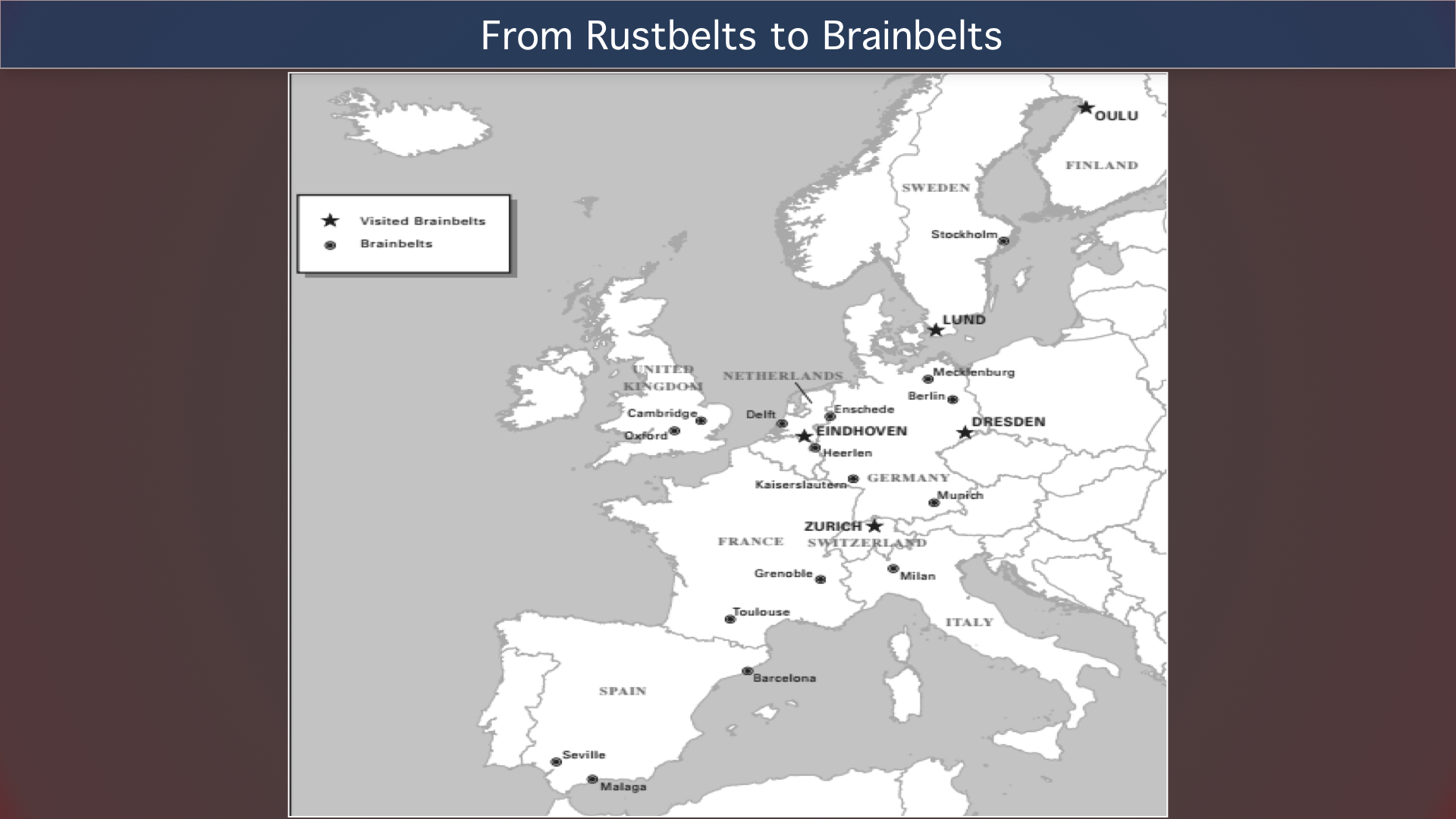 “This is not just an American phenomenon.”

In Europe, cities like Delft in the Netherlands, Lund in Sweden, Oulu in Finland, and Dresden in Germany have also come to the forefront of global innovation. 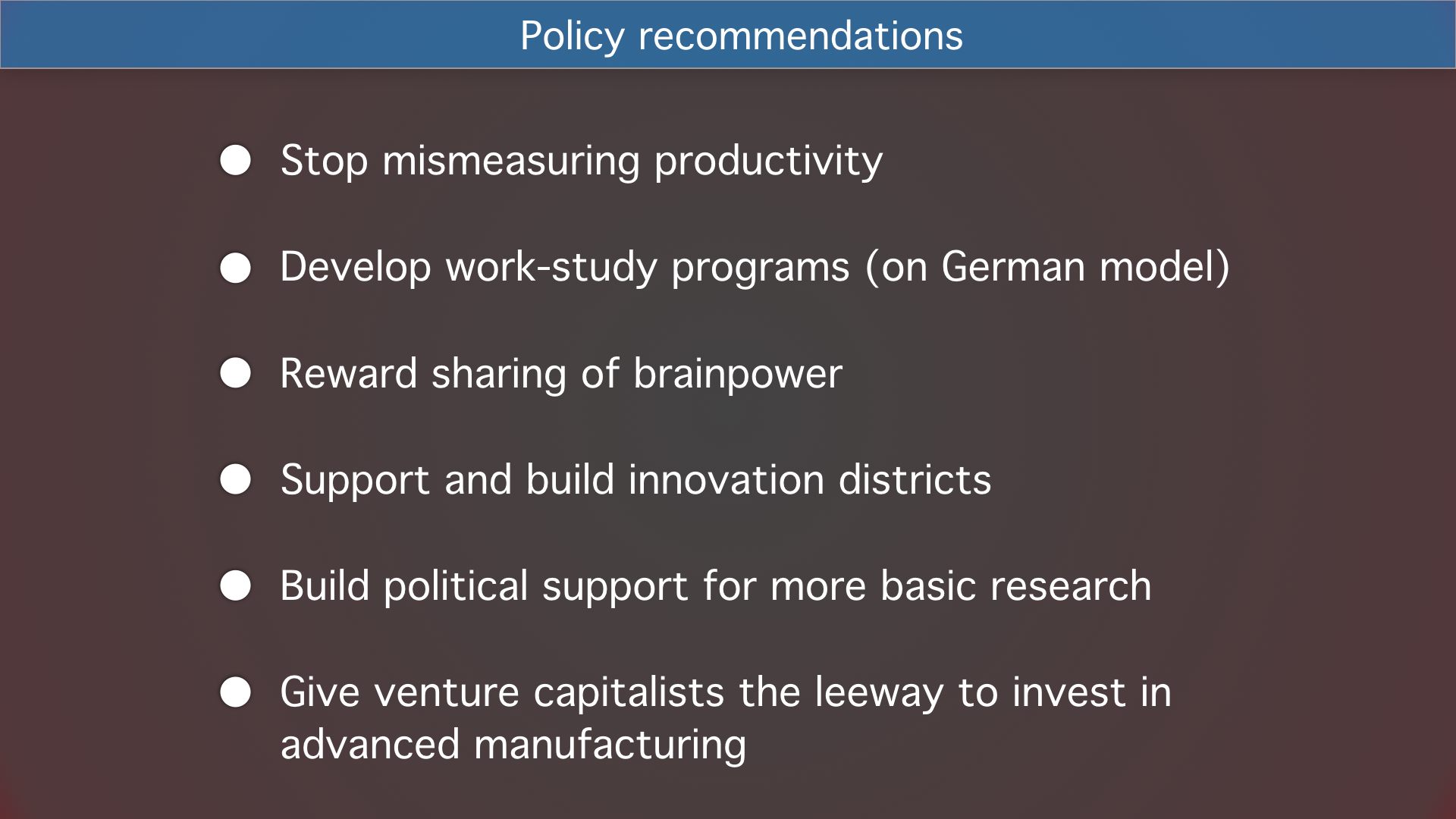 “We couldn’t be at Brookings without making some policy recommendations.”

How can we support the emergence of more brainbelts? Among many other recommendations, van Agtmael recommends the cultivation of work-study programs. As rustbelt cities transition into high-tech fields, they are creating large numbers of high-skill jobs, but most parts of our country lack the workforce development infrastructure to match local residents with the opportunities available. Partnerships between the local business community, academic institutions, vocational schools, and governments will be essential in developing local talent pipelines to connect workers with employment opportunities in innovative companies.

Editor’s Note: Antoine van Agtmael is a donor to the Brookings Institution. The findings, interpretations and conclusions posted in this piece are solely those of the authors and not determined by any donation.

R&D for the public good: Ways to strengthen societal innovation in the United States