Our article Tuesday on The Washington Post’s Monkey Cage blog, The mysterious absence of women from Middle East policy debates, garnered significant attention and, we hope, generated discussion within Washington’s think tanks and media organizations about how to advance the goal of gender parity in all our work.


Many people asked for the data that underlie our article’s claim that 65% of last year’s Middle East events at six major think tanks lacked any women speakers. We present that data below. It was compiled, we stress, from public sources (websites) and thus does not include many other events that were invitation-only. We invite our fellows at Washington think tanks, especially those whose events are almost all by invitation, to help us build this public dataset as a means of auditing our collective performance over time – starting with 2014 and from now on. And, of course, we are open to seeing any evidence that would improve accuracy or correct empirical errors in the data shown below. 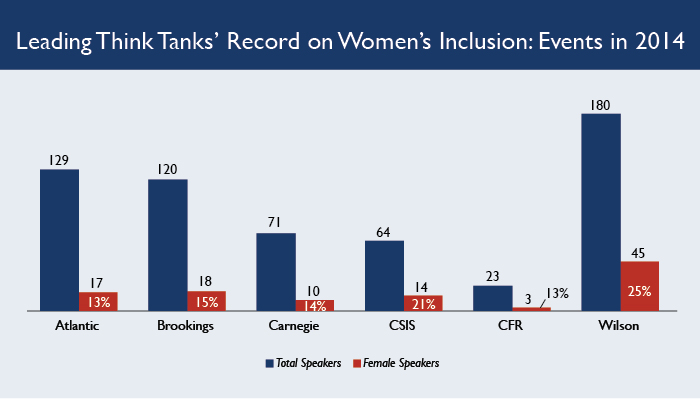 A few additional notes in response to feedback we’ve received on the article:

1) The moderator issue:  In compiling statistics on women’s representation, we excluded women who served as moderators. Why? A few reasons. First, moderators are often drawn from a think tank’s own scholars, so moderator numbers reflect hiring more than a think-tank’s choices about to whom they offer their public platforms. Interestingly enough, moderator numbers show a higher proportion of women than speaker numbers. This may reflect that think tank scholars are more diverse than think tank speakers — a notable finding if true — but might also reflect that think tanks often put together an all-male panel and then seek a female moderator to “compensate.” Anecdotally, women experts report being asked to moderate all-male events frequently — indeed, one female expert i know has declared that she will no longer agree to serve in such circumstances: if she’s knowledgeable enough to moderate, she argues, she’s knowledgeable enough to speak, and she’s tired of “pinkwashing” otherwise all-male events with her presence. Finally, moderators and speakers are not of equal value in measuring think tank performance relative to the objective of improving women’s visibility in the field — a speaker is (obviously) there to demonstrate their insight, while a moderator is there to facilitate the demonstration of others’ insight (only ill-mannered moderators dominate a panel discussion with their own views).

2) Our table includes not only panel discussions, but also events that had a single, featured speaker. Some would argue that this distorts the findings, because so many of these events are senior officials, from the US government or the region, and these senior officials are disproportionately male. But solo-speaker events matter too in measuring women’s visibility – indeed, one can argue that they matter even more. Take, for example, CSIS’s unfortunately named “Statesmen’s Forum” – its premier platform for foreign policy leaders to speak to Washington. Of 15 speakers in the series last year, only one was female. That cannot be because women are absent from global affairs, since they are evidently not. Like most think tanks, CSIS likely issues general invitations to a host of world leaders to give a speech when they come to Washington. How many women leaders has CSIS even approached for its Statesmen’s Forum? There are prominent and important female voices in the Middle East in government, business, civil society and culture. And there are many female officials in non-Middle Eastern governments who work on the region. You can host them, yes you can! To its credit, CSIS did host a female cabinet-level US government official for a featured event last year – the launch of its partnership with Fortune Magazine on “Smart Women, Smart Power.” Segregating women leaders into a “women’s series” may be a great way to “celebrate” them – but it is unlikely to demonstrate that their relevance to policy is on a par with their male peers. Quite the opposite.


3) Other dimensions of diversity: Yes, other types of diversity matter too. Indeed, the lack of racial and ethnic diversity in foreign policy is woeful, far more marked than the gender imbalance. Our article focused on gender in part because women are so easily found in the field today. As we noted, women make up at least half of graduate students in international affairs at many premier schools that train foreign-policy experts and practitioners, and women populate even senior reaches of the field. The problem of gender inclusion, then, is a dramatic disjuncture between presence and visibility.  For ethnic and other minorities, the problem is different — we must yet do more to persuade these minorities to pursue PhD’s and to aspire to senior levels in the field, and we must smooth the “pipeline” that recruits, develops and advances young scholars up to senior levels.


Another dimension of diversity relates to representation of “indigenous voices.” Some highlight the lack of Middle Eastern voices on panels about the Middle East, a critique encapsulated in the phrase “Nothing About Us Without Us.” This, too, is a problem worth confronting, but a different one than the problem of gender inclusion. We do not suggest that women should be included in foreign policy debates in order to provide a “female perspective” on the issues. Women should be included in our public discourse because they are part of our expert community currently denied visibility because of longstanding societal bias — regardless of where they come from or what substantive views they may have.

Editor’s Note: A previous version of this piece inadvertently transposed the numbers of all-male speakers. The percentages remained the same.