As Iranian airplanes attacked ISIS positions in Iraq last week, the Obama administration’s dilemma was captured well by a New York Times headline: “U.S. and Iran Both Attack ISIS, but Try Not to Look Like Allies.” Part of the dilemma for the administration is strategic and is directly related to the Iran nuclear talks. One worry the administration has had is that Iran may think the US has no choice but to accept Iranian terms for a deal, in large part because of the changed strategic environment that elevated the ISIS threat and led to a new American military involvement the United States cannot afford to lose. Iran and the United States have far more overlapping than conflicting interests on ISIS, and both recognize this fact.

But there is obviously a domestic political concern for the administration in appearing to be moving closer to Tehran on any issue that seems to weaken its hand in the negotiations. The Iran nuclear issue remains high in Congressional priorities and will likely get higher after January with Republican control of the Senate.

Despite this, the Obama administration appears to have decided to risk appearing open to an Iranian role in fighting ISIS, as it certainly allowed the Iraqi government to coordinate such a role, and Secretary of State John Kerry described it as a good thing. There is evidence from recent polling that this may not be unwise when it comes to American public opinion. Obama assumes that nothing he is likely to do in the Iran nuclear negotiations will appease Congressional Republicans and thus his best bet is getting the American public on his side. Evidence shows the public may be moving in that direction.

The starting point is not about Iran as such; it’s all about shifting public priorities. In a poll I conducted November 14-19, 2014 among a nationally representative sample of 1008 Americans, it turns out that American public fear of Iran is dwarfed by the fear of ISIS. Overall, 70 percent of Americans polled identify ISIS as the biggest threat facing the United States in the Middle East, 13 percent identify violence in the Palestinian-Israeli conflict, and 12 percent identify Iranian behavior. While on many issues, including the Arab-Israeli conflict, Americans are strikingly divided across party lines, remarkably on this issue there is very little variation across the political spectrum. 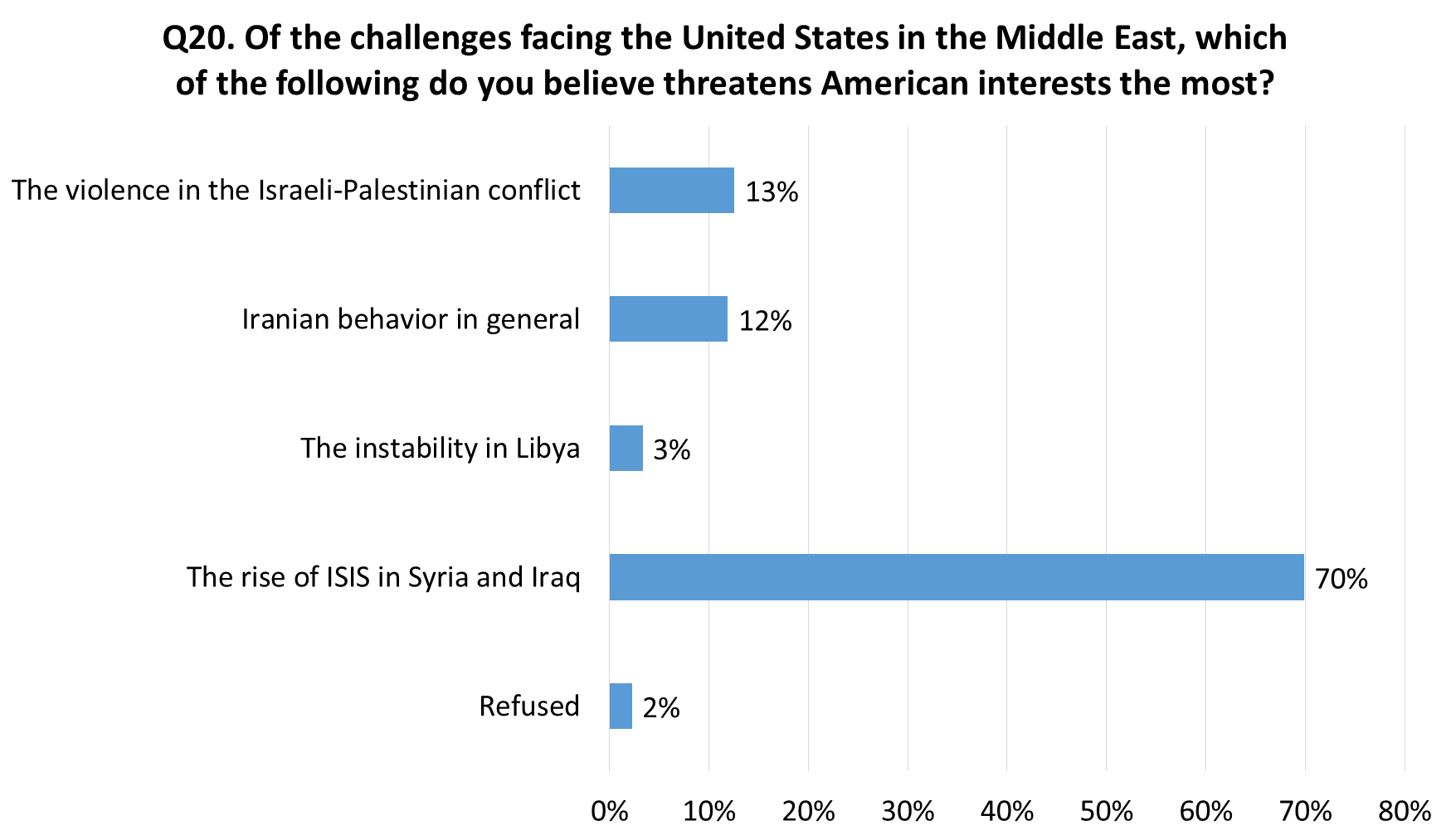 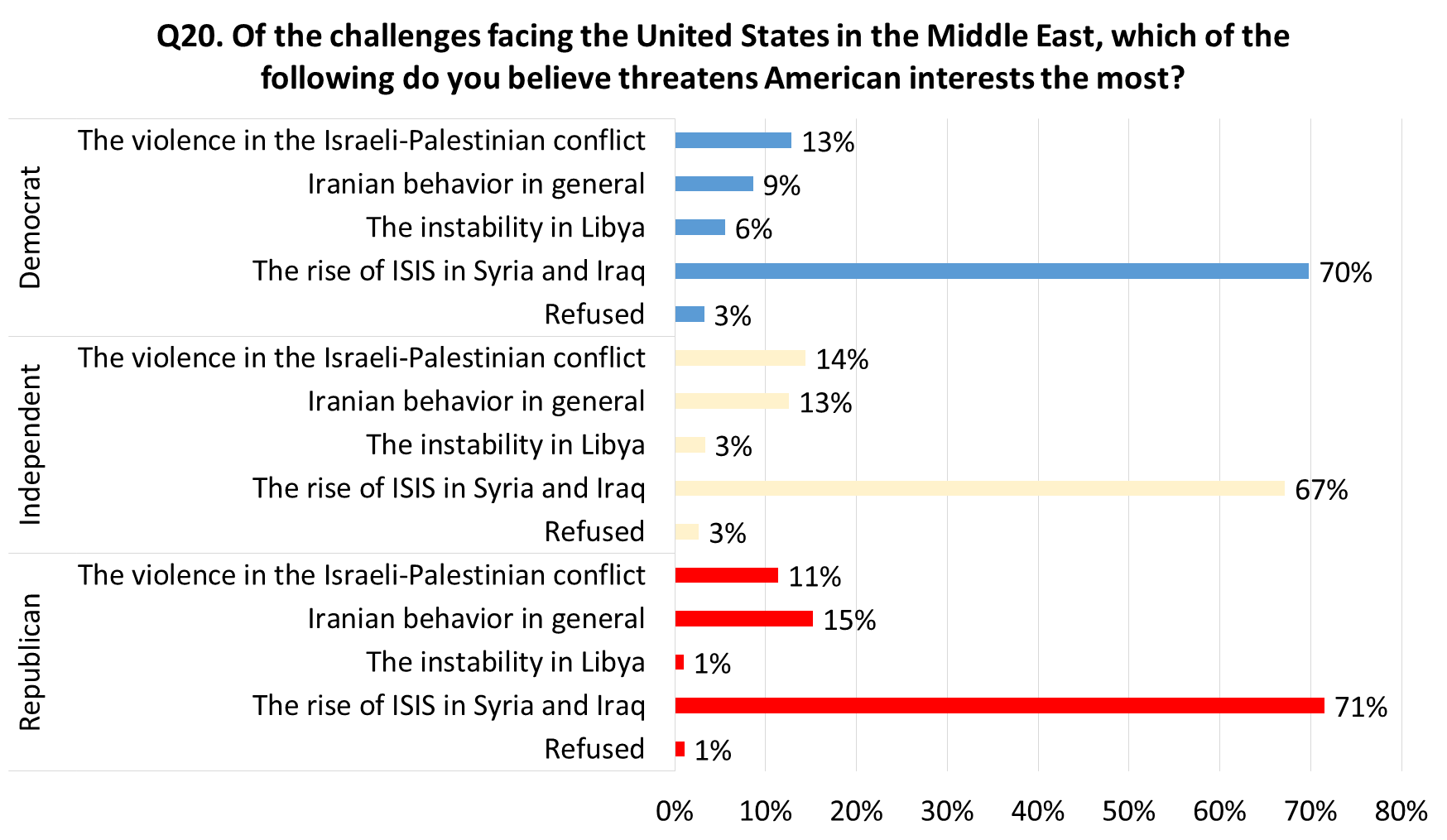 There is also evidence that Americans connect issues, and that the fear of ISIS affects the way they think about other issues. While Secretary Kerry was criticized recently for suggesting that Palestinian-Israeli violence affects the degree of support for ISIS, my poll shows that a majority of Americans, including a majority of Republicans, agree with him. 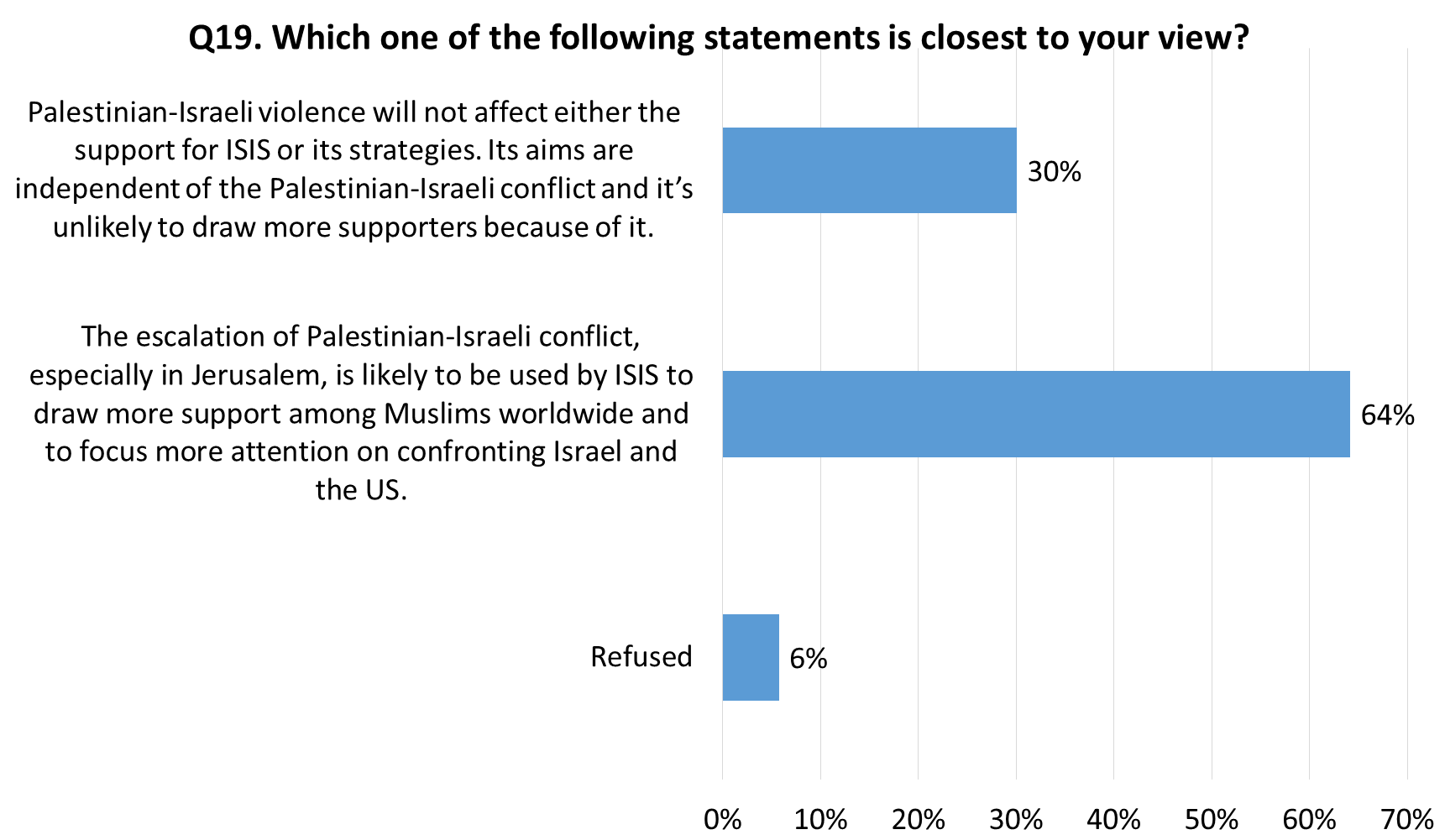 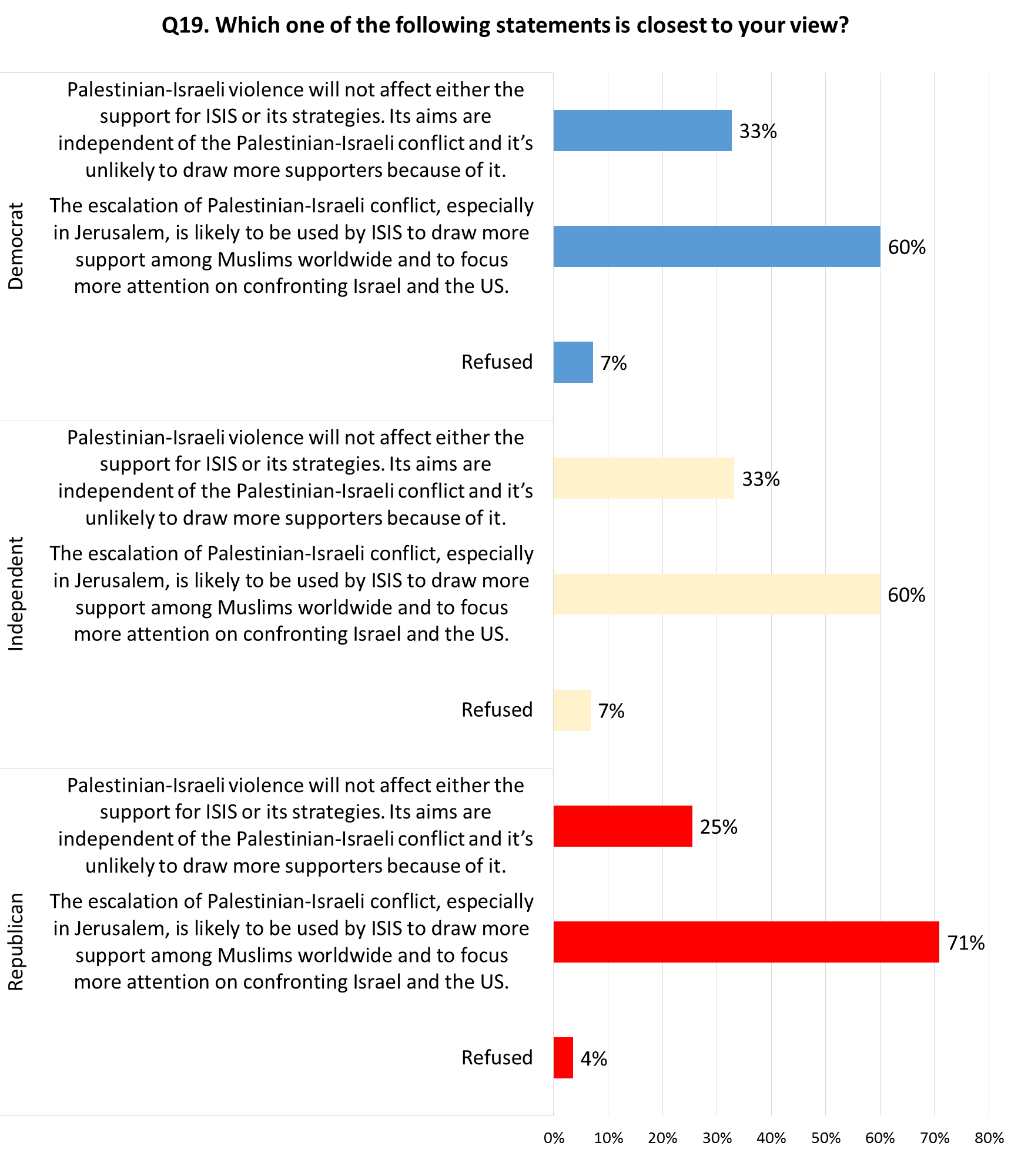 The rise of the ISIS threat is certainly a primary reason for lowering the Iranian threat in American perceptions, but it’s not the only reason. When asked about the parties that are most threatened by Iran, only 22 percent of the American public say that the US is most directly threatened, while 43 percent see the threat mostly to Israel, and 21 percent say Arab allies. These trends generally hold across demographic lines but with some notable variations. Republicans for example, identify the threat to the US to be roughly the same as the rest of the populations, but a majority, 54 percent see the threat principally to Israel — and they tend to lean toward Israel more than the rest of the population. 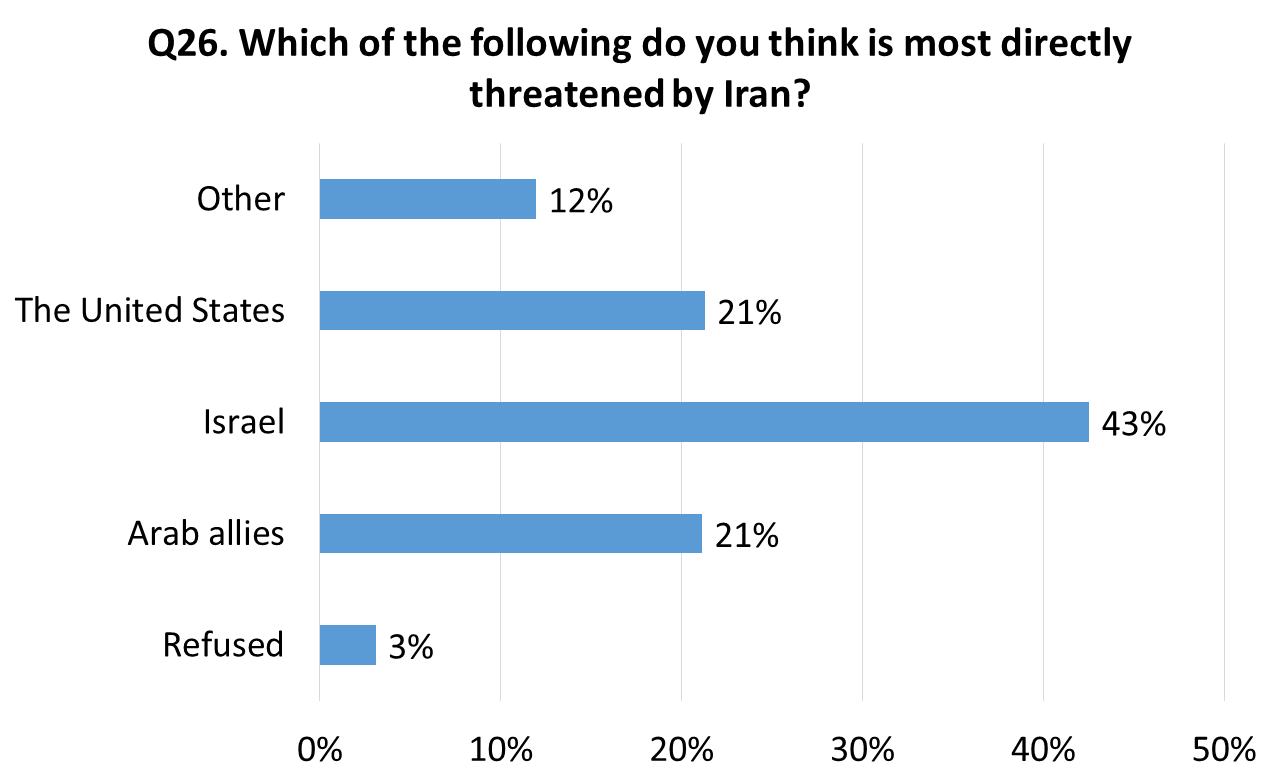 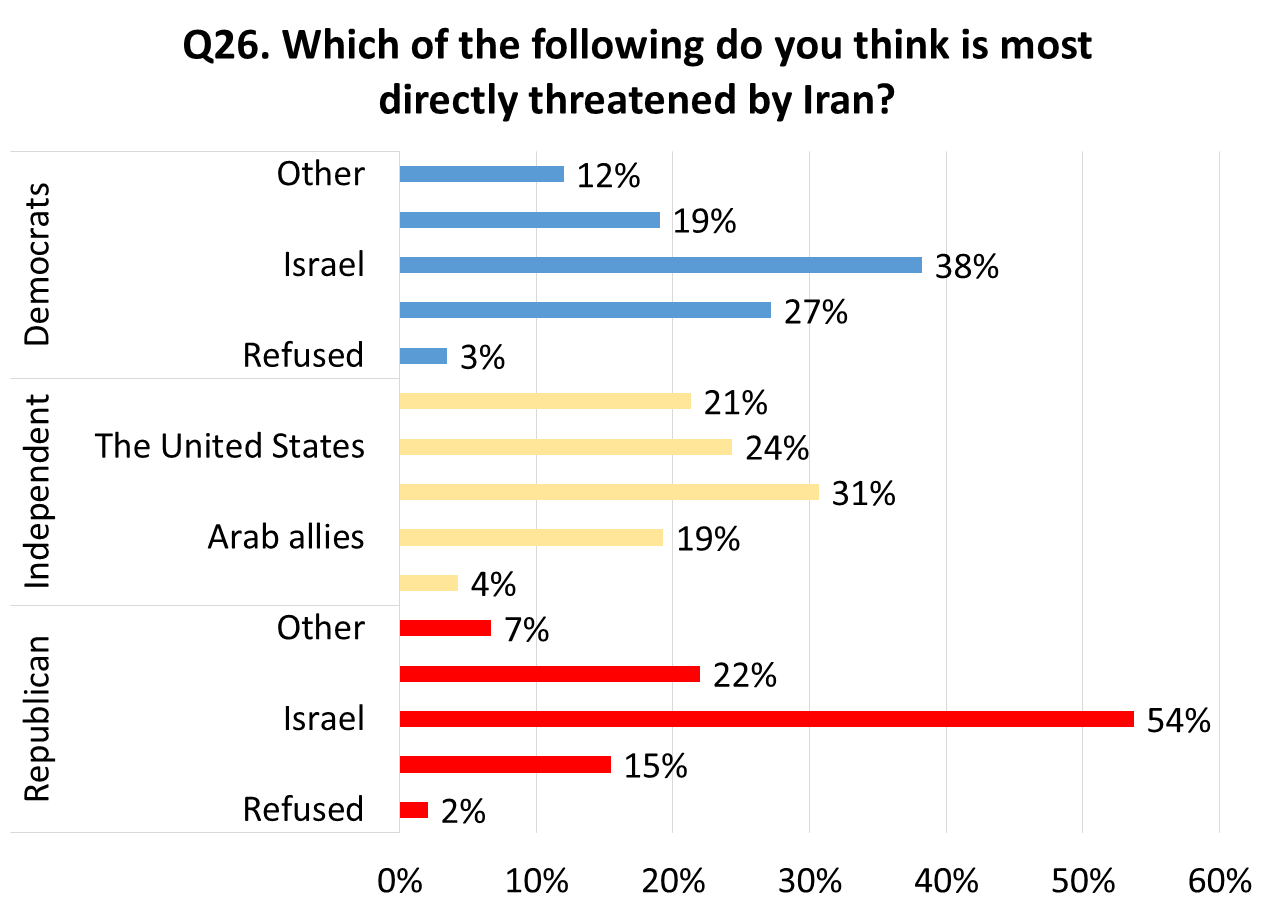 The bottom line is that there is a clear political benefit for the administration in linking Iran and ISIS at the level of public opinion as Americans’ fear of ISIS presents openness to Iran that wasn’t there a few months ago. This of course has little to do with Congressional politics — or with Israeli politics, which in turn influences Congressional politics. Congressional Republicans are bound to increase the heat on administration policy toward Iran in the next several months no matter what the outcome of the negotiations on Iran’s nuclear program.

The White House’s concern that U.S. cooperation with Iran on ISIS may weaken the American hand in negotiating an acceptable deal on the nuclear issue is mitigated by an assumption that Iran wants to see ISIS defeated as much as the US if not more — and thus does not gain any advantage in the nuclear negotiations from this issue. Bolstered by public opinion polls, the Obama administration seems to have concluded that linking Iran to fighting ISIS psychologically prepares the American public for a possible deal with Tehran. American public attitudes on this issue would in turn help counter Congressional skepticism.

Nonstate armed actors in 2022: Alive and powerful in the new geopolitics

Nonstate threats in the Taliban’s Afghanistan