February’s jobs gains, released this morning, mark 65 straight months of (significant) positive jobs growth in the U.S. (going back to October of 2010). Each month, many thousands of workers across the U.S. lose their jobs, while others find themselves newly employed. The net number of jobs created or lost in all this activity is an important indicator of the nation’s economic health. But the raw number of jobs created or lost from one month to the next doesn’t say much about the underlying economy. Rather, many of these month-to-month changes are the result of predictable seasonal fluctuations. For example, the fact that the last ten Januarys witnessed the economy shedding over 2.5 million jobs is simply retailers slowing down after the holidays and says nothing about broader economic performance.

I calculate the month-over-month change in total nonfarm payrolls, seasonally adjusted by the 3×9 filter, for the most recent month. The corresponding data as published by the BLS are shown for comparison purposes. According to the alternative seasonal adjustment, the economy gained 261,000 new jobs last month, compared to the official BLS total of 242,000. Data updates released today for prior months also reveal some differences between my figure and the official job gains from prior months. While the official BLS numbers for January were updated to 172,000 new jobs (compared to 151,000 at the time of the release), my alternative adjustment indicates that only 109,000 new jobs were added, 63,000 fewer than the official number. The discrepancies between the two series are explained in my paper.

We calculate that relatively mild weather (across the nation) in February inflated new employment by roughly 33,000 jobs, bringing the weather-adjusted total to 209,000 new jobs, down from the official number of 242,000. The positive effect seen in February can likely be explained as a positive bounceback from the large negative effect of the snowstorms in January. However you parse it, the past year has seen on average 224,000 new jobs added every month, and 65 straight months of positive jobs growth is surely a good sign. 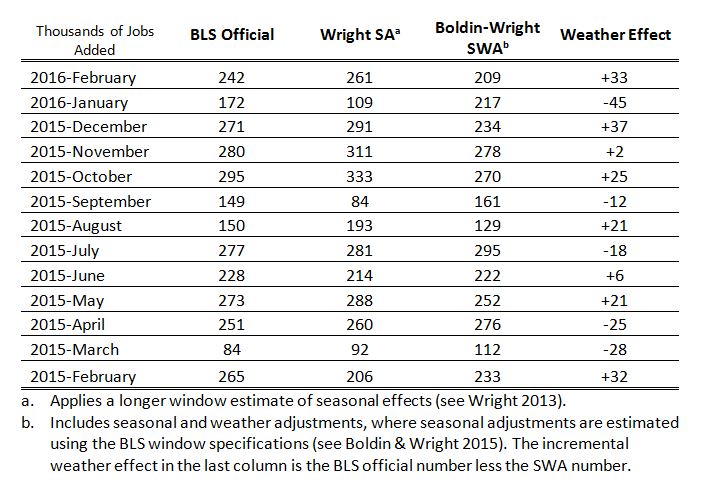