The BLS employment report for August showed continued slow improvement in the job market, with employers adding 173,000 workers to their payrolls.  The pace of job growth was slower than gains in the year through July, when monthly payroll growth averaged 218,000 a month.  Today’s report added to the number of jobs gained in in June and July, with the upward revisions boosting payroll gains in those two months by 58,000.  Despite the turmoil in stock markets last month, financial companies continued to add to their payrolls.  The financial industry added 19,000 workers in August, substantially faster than the average rate of gain over the previous year.

The Labor Department’s household survey also showed healthy job gains last month.  Respondents in the survey reported an employment total that was 196,000 higher than employment in July.  Because the labor force also edged down in August, the unemployment rate dipped 0.2 percentage points, reaching 5.1%, its lowest level since April 2008.  The jobless rate is now just 0.5 percentage points above the average unemployment rate in 2006 and 2007, the last years before the Great Recession.

Healthy payroll gains combined with the steady drop in unemployment are welcome news.  However, one reason unemployment has fallen to 5.1% is that adults whom we would expect to be in the labor force have dropped out or have failed to start looking for work.  This is easiest to see if we look at work patterns among people between 25 and 54. Before the Great Recession, 83% of men and women in this group were in the labor force, either working or looking for a job (Chart 1).  In August, just 80.7% of prime-age adults were in the workforce, a drop of 2.3%.  It is reasonable to expect some fall in participation when the labor market weakens and jobs get much harder to find.  In August 2015, however, the labor market had been improving for more than 5 years. Jobs are much easier to find than they were 3 or 4 years ago.  Despite this improvement, we have yet to see a rebound in participation among prime-age adults. 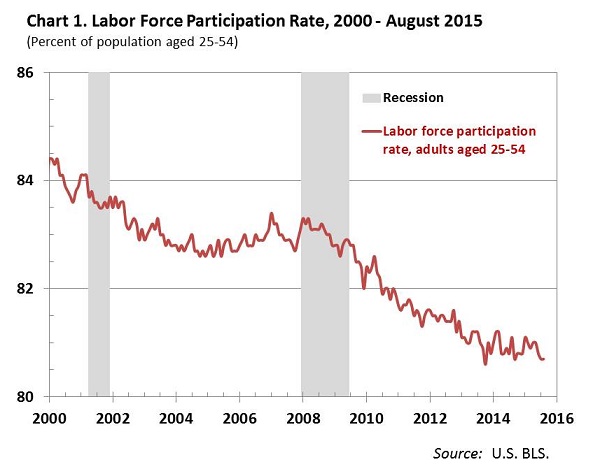 Fortunately, we have seen an improvement in their employment rate.  Almost 80% of 25-54 year-olds held jobs in 2007 (Chart 2).  The employment rate in this age group fell below 75% in the worst months of the recession and early recovery.  In August it stood at 77.2%.  That is a jump of 2.4 percentage points compared with the worst months of the early recovery, but it is still 2.7 points below the average prime-age employment rate in 2007.  The labor market is healing, but the sustained drop in participation is an indicator that the job market is still some way from robust good health. 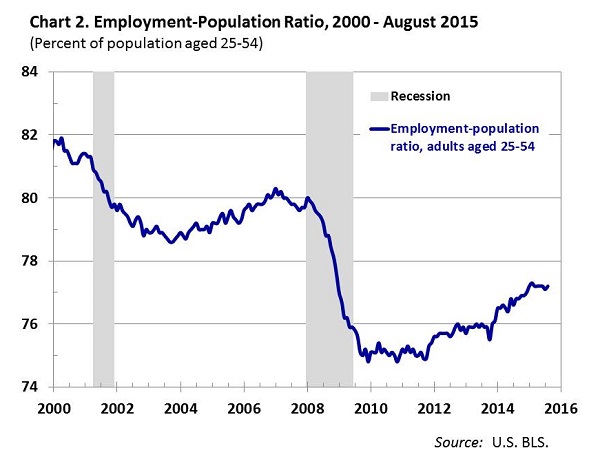 Wage gains reported in the latest employment report remain modest.  Compared with wages one year ago, hourly earnings this past August edged up 2.2%.  This represents a slightly faster rate of wage gain than we had seen in the previous 4 years, but it suggests there has been little improvement in worker bargaining power.  Whatever the anecdotal evidence about employers’ scramble to fill job vacancies, recent wage reports show that business owners remain firmly in the driver’s seat.  Workers are seeing the same anemic pay gains they saw when the unemployment rate topped 8%.  Luckily, consumer prices have changed little over the past year, so worker’s modest wage gains translate into an improvement in purchasing power.  If workers shrug off the recent stock market turbulence, higher real earnings should translate into stronger consumer spending in the coming months.