Following the dramatic decline in unemployment in April, I now see no further improvements in the unemployment rate over the next 6 months, with a jobless rate steady at 6.3% until September (figure 1). 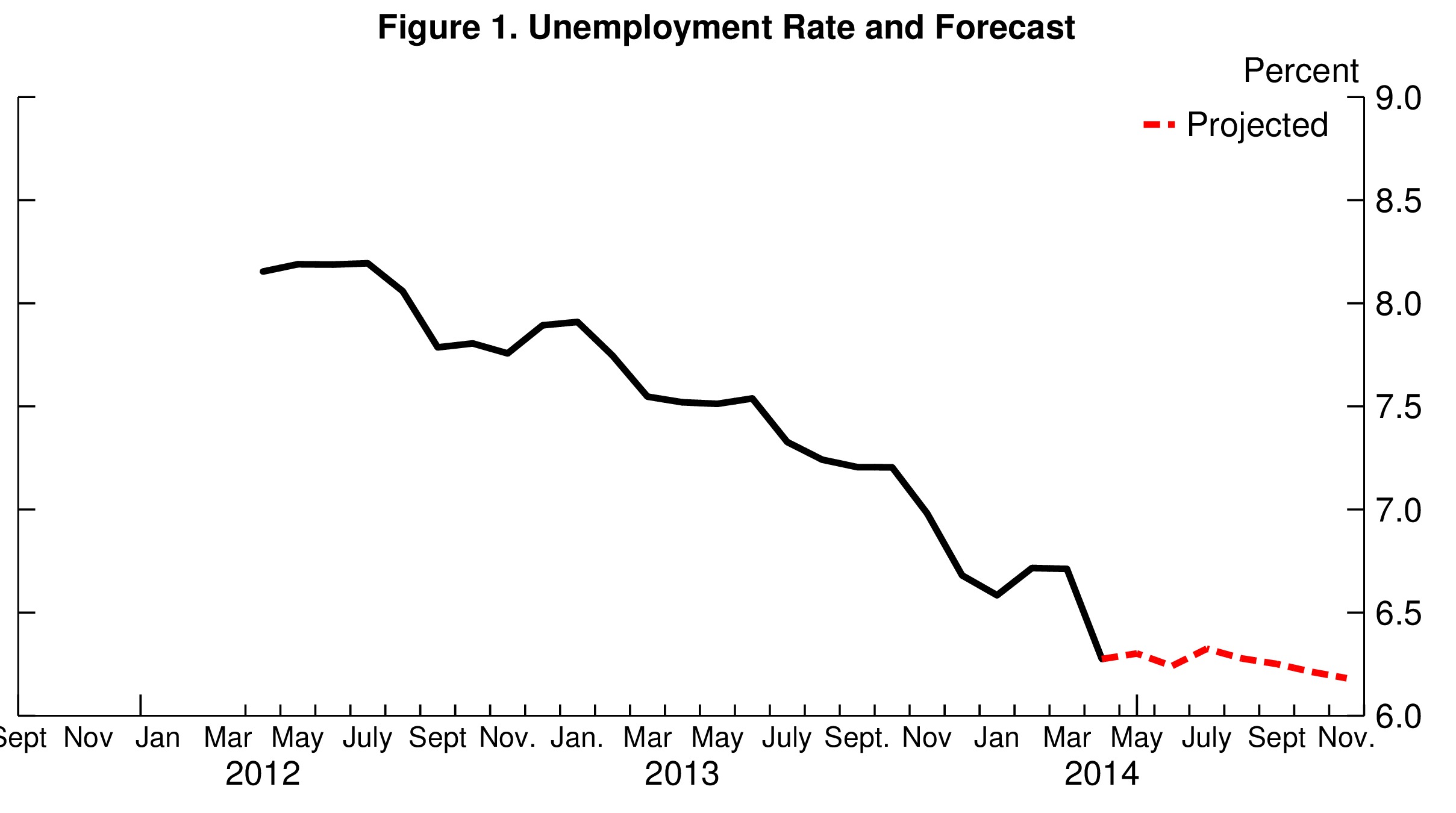 In April, the unemployment rate took an unexpected plunge and dropped from 6.7% to 6.3%, while our model anticipated no change. The decline was driven by a large increase in the Unemployment to Nonparticipation transition (UN) rate (figure 2), i.e., by an increase in the number of job seekers leaving the labor force. While it is a priori hard to tell whether this jump reflects a real phenomenon or whether it is just an artifact of sampling noise, the model’s forecast can give us some elements of an answer, because the forecast is based on past behavior of the worker flows, and therefore on “typical” movements in the flows. The fact that the model reverts the jump in UN over the next few months (figure 2) thus suggests that the April report was particularly noisy and hard to interpret. 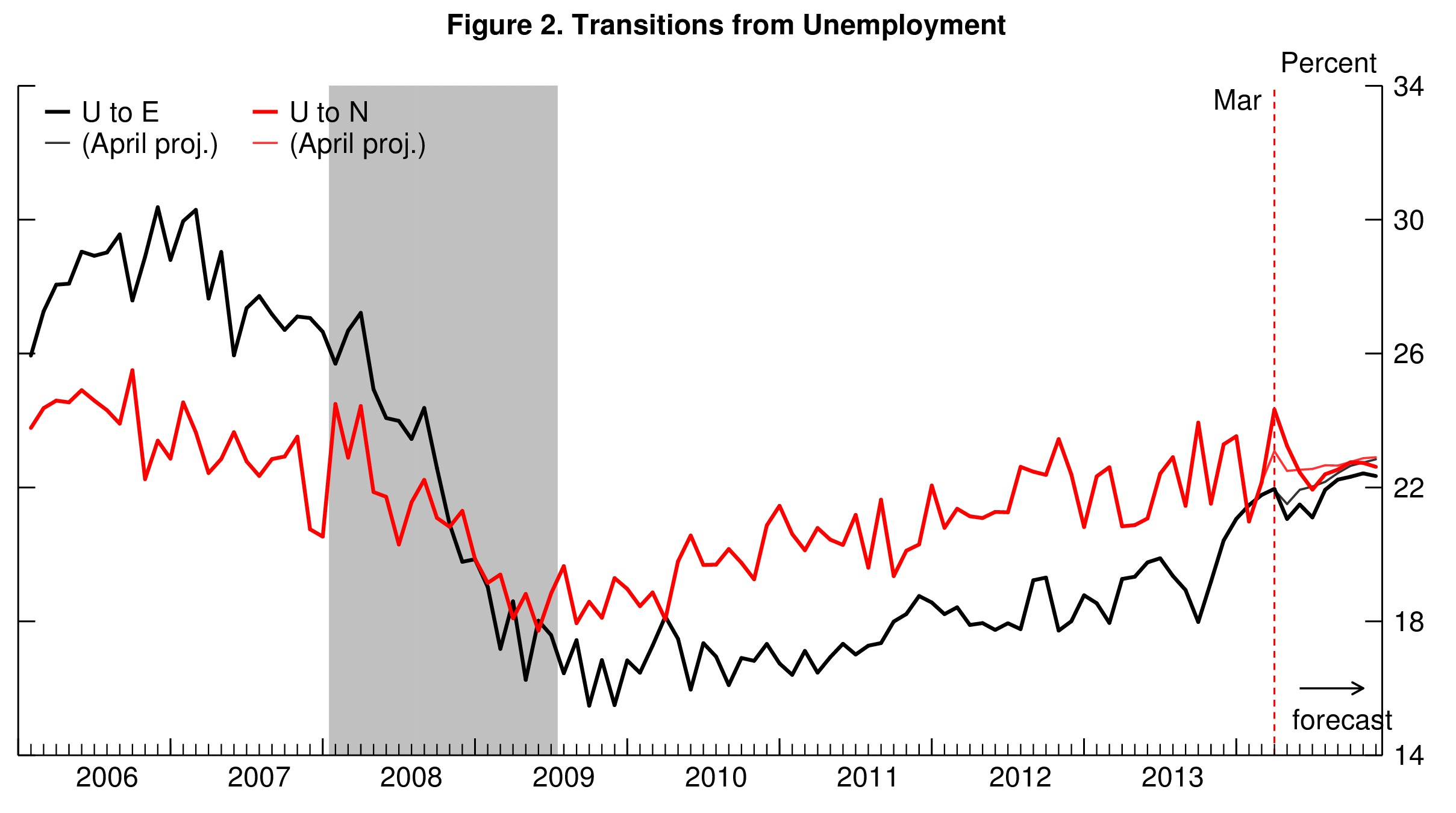 Interestingly, two other flow rates displayed surprisingly large movements: the Nonparticipation to Employment (NE) transition rate and Nonparticipation to Unemployment (NU) transition rate both dropped substantially (figure 3). While these changes had little effects on the unemployment rate as the two changes compensated each other (a lower NE rate implies a higher unemployment rate, while a lower NU rate implies a lower unemployment rate), they are responsible for the abrupt drop in the labor force participation rate in April (Figure 4). Again, the model’s forecast suggests that some of these movements reflect sampling noise as the model partially reverts the drops over the next few months. Again, the behavior of the worker flows suggests that the April report was particularly noisy. 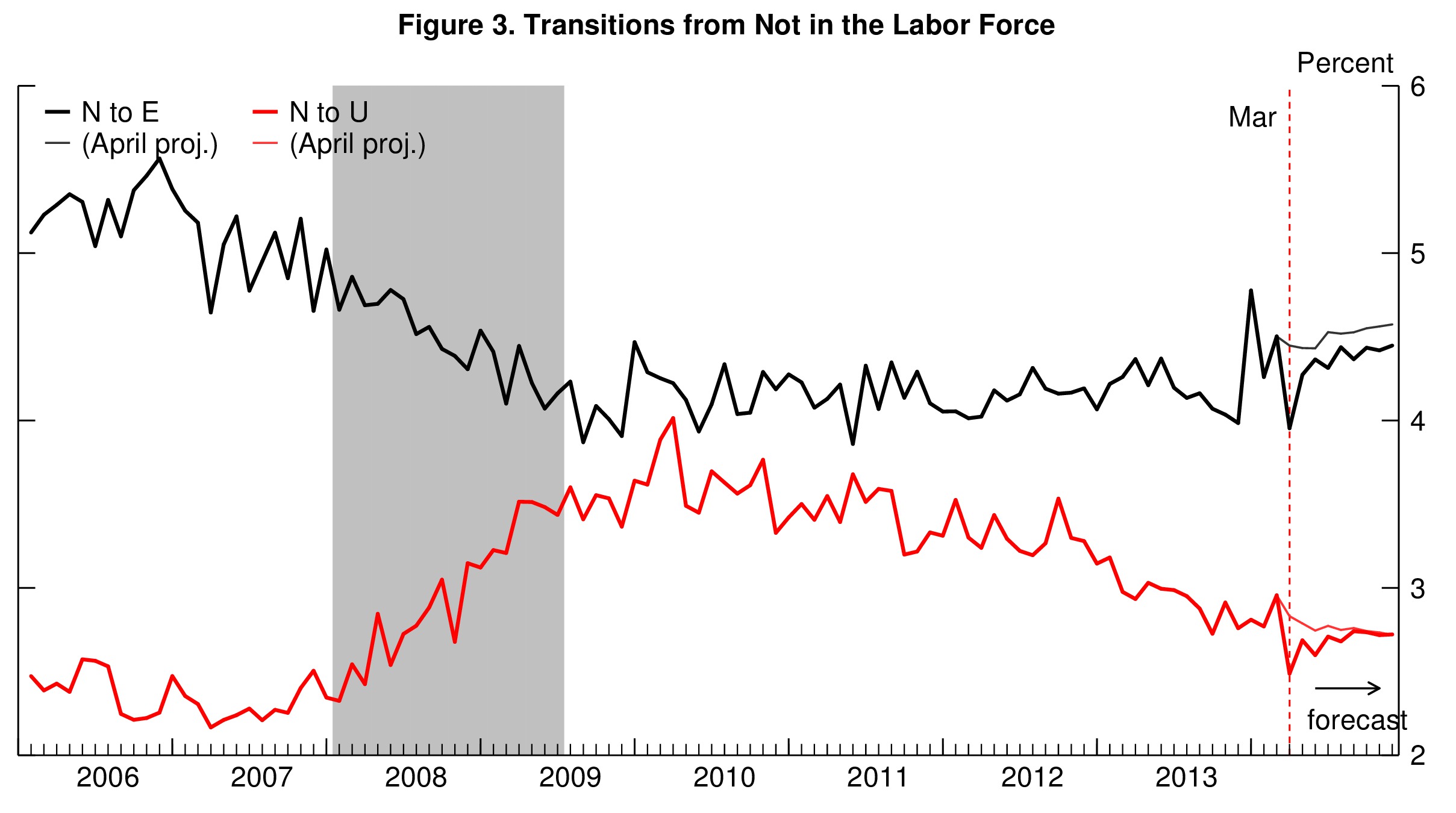 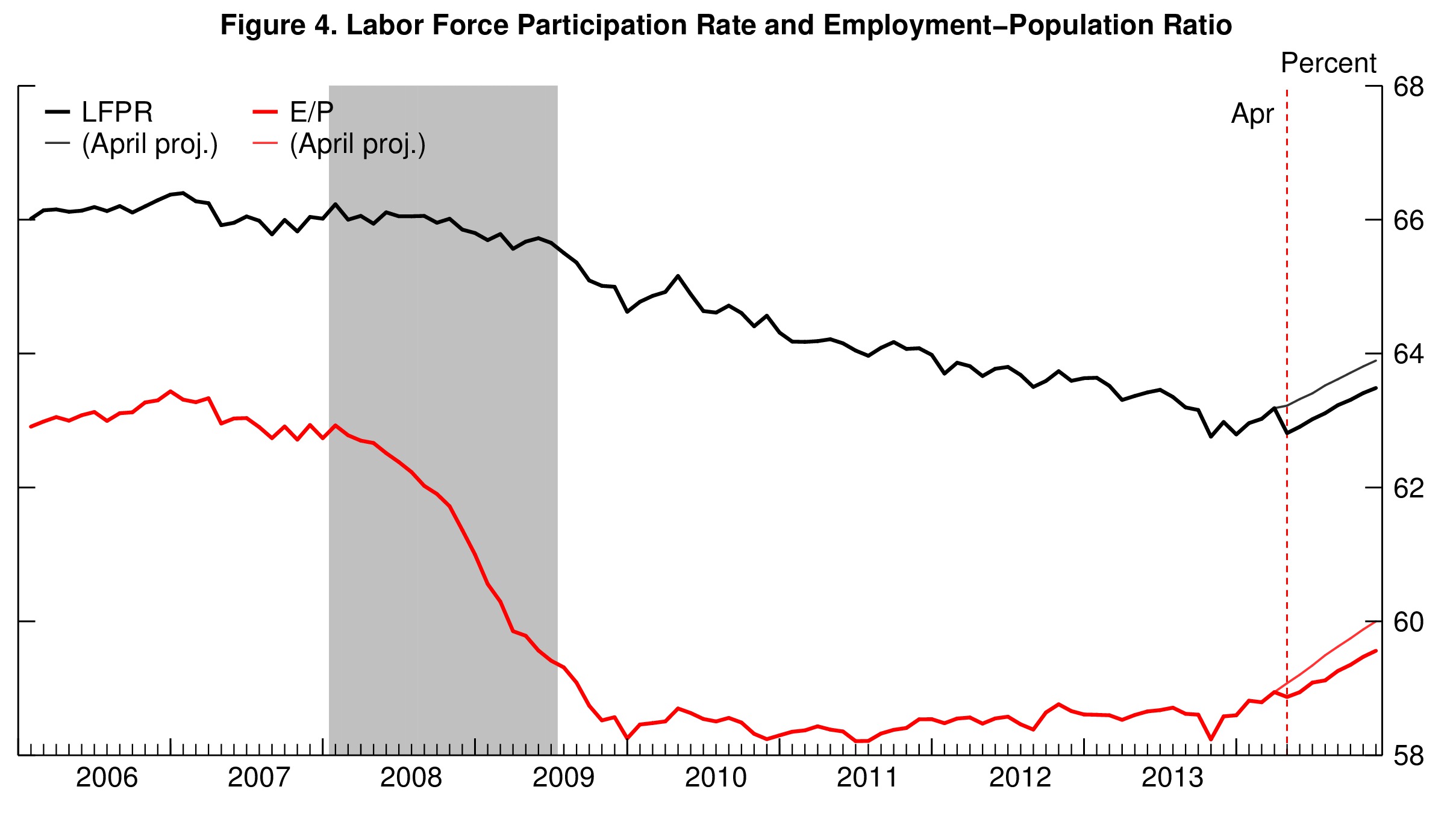 Looking forward, the model sees no further improvements in the unemployment rate over the next 6 months, with a jobless rate steady at 6.3% until September. 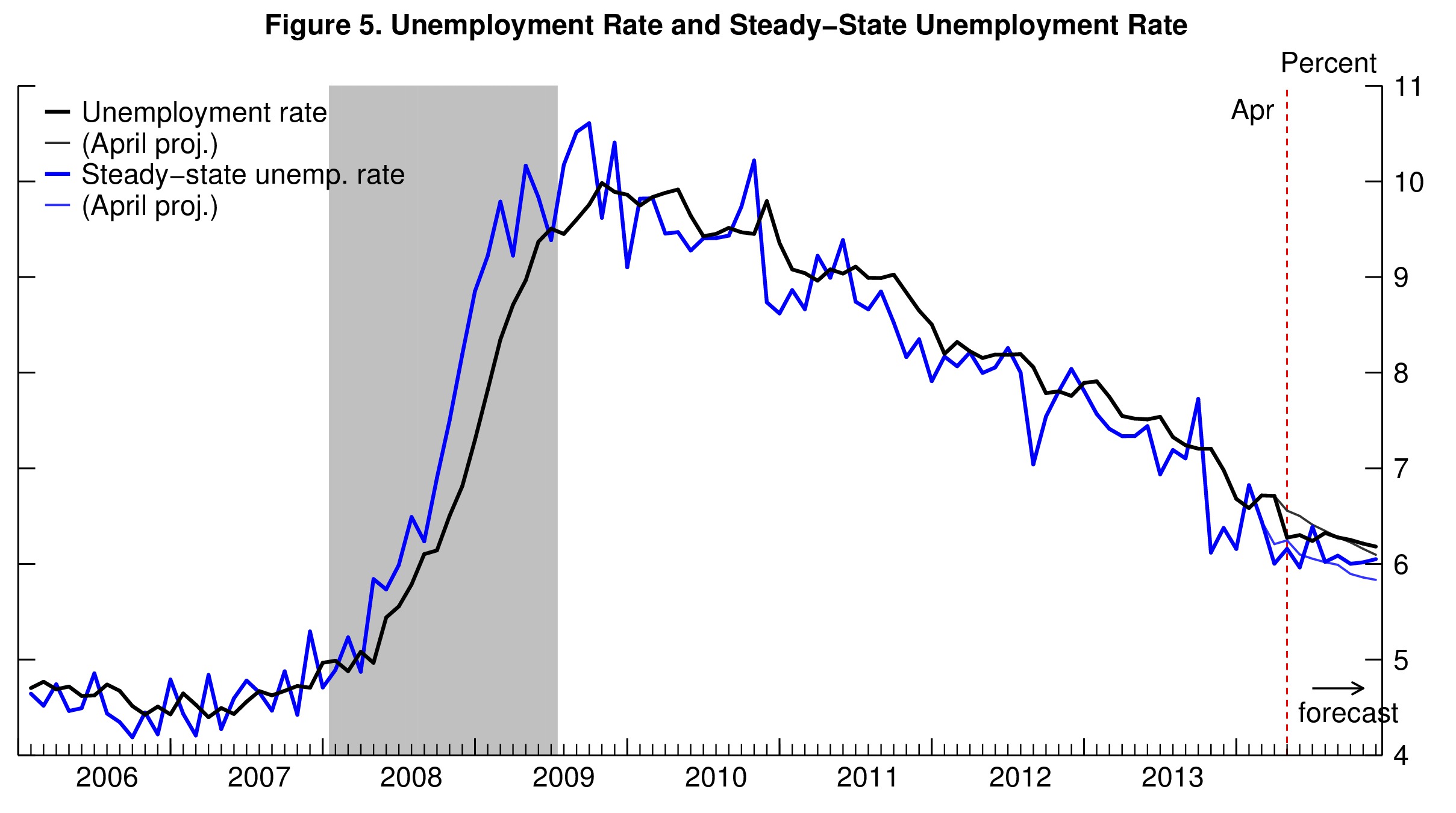