The year 2015 was a big one for global development policy debates, marking the end of the Millennium Development Goals (MDGs) and the launch of the new Sustainable Development Goals (SDGs), also known as the “Global Goals.” But how much did major media pay attention?

Last September, Christine Zhang and I published a working paper that examined mentions of the MDGs across major English-language press and academic outlets from 2000 through 2014. We blogged highlights from the original paper here.

More recently, we updated some of the results to account for last year’s major MDG-SDG debates and events. Figure 1 adds 2015 newspaper data on the MDGs and also includes SDG mentions over the entire time period. 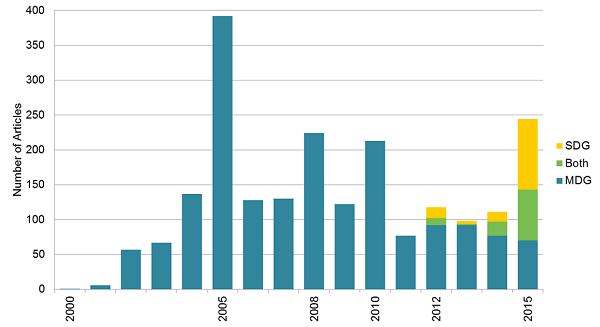 Here are three key takeaways from the new graph:

To be clear, these results do not provide a complete assessment of MDG-SDG media references in recent years, especially because social media and other new digital technologies now account for such a large share of public debate. (Note that the graph also excludes developing country newspapers, some of which we examined in the original working paper and similarly updated with 2015 results, but those do not make much difference to the overall story.) Thus one should not consider Figure 1 a definitive analysis of whether SDG advocates were successful in their public outreach campaigns last year.  From a research perspective, the simple new-ness of “new media” renders long-term comparisons difficult. Restricting the data sample to print media offers one way to benchmark apples-to-apples coverage across the period of interest back to 2000.

That said, a seasoned media observer once suggested to me that traditional news outlets are inherently less connected to the bottom-up nature of emerging SDG conversations, and hence less likely to cover the SDGs accurately than new media channels in which user-generated content helps to drive the conversation. It’s an interesting hypothesis worth testing.

At a minimum, 2015 was a significant year for public conversations about the MDGs and SDGs, even if it might not have matched the peak year of 2005. An interesting line of research could seek to explain why.  In any case, for analysts of the new SDGs, more sophisticated forms of global media benchmarking will undoubtedly be in order through to the new deadline of 2030.