Zlatko Junuzović is one of the star players of Austria’s national soccer squad. When he scored the winning goal against Moldova in September, he paved the way for the first ever direct qualifier of Austria to a European championship. Junuzović is also a great example of the talents of Bosnia and Herzegovina, the country he was born in and which he left during the war at age five with his parents.

Twenty years after the end of the war, his country of birth is not doing as well as it could. Bosnia and Herzegovina (BiH) faces acute social and economic challenges. While many of its people left the country and often succeeded in other parts of Europe, the economy at home is out of balance and far from approaching European living standards. The country has three major, mutually reinforcing imbalances that need to be corrected (Figure 1): 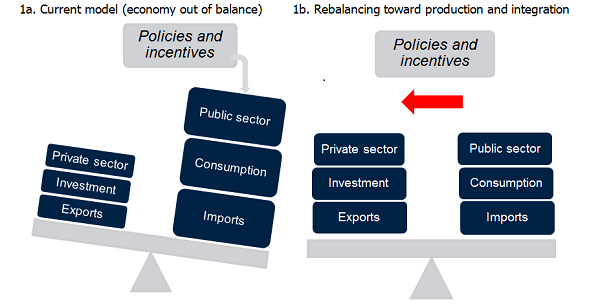 As a result of these imbalances, BiH society is split into a small productive population and many more living on transfers from the government or relatives, with important urban-rural differences. Only about one in three working-age adults has a job (and only one in four has a formal job). Much of the population lives from informal activities, remittances, or social welfare. Many of these welfare dependents live in rural parts of the country. Despite higher rates of poverty, the rural population has not declined as a share of total population since the war. Rural life remains the better alternative for many Bosnians who do not have jobs and cannot afford the higher cost of living in cities.

Reform is challenging because winners from reform are weak and the losers are strong. The winners of reform will be the poor and often voiceless masses who will reap benefits only after a few years. By contrast, the potential losers tend to be smaller but well organized groups. The poor and vulnerable have been left out of the system, and around half of the population is at risk of social exclusion by some measures.

But there is some cause for some optimism, and the country has a number of opportunities as well. Like other European economies, BiH could benefit from the EU’s “convergence machine,” which probably remains the most successful model of economic transformation. Building on a relatively stable macroeconomic position, the government could convert any fiscal adjustment into public investment or a reduction of the tax burden on workers and business. Leveraging its strengths, BiH could become a vibrant economy with dynamic entrepreneurs leading a “catch-up race” with wealthier countries in Europe. That would mean creating conditions for a bigger and internationally competitive private sector, which would encourage youth to stay in BiH and the diaspora to return or invest in export-oriented sectors that can generate sustainable, productive jobs.

Finland, Sweden, and the future of NATO

Belarus has good reason for concern over Putin’s nuclear intimidation

Scotland and the future of European energy security