Italy hosted two major events for global food and nutrition security last week. The Committee on World Food Security (CFS) convened its 42nd annual session in Rome. And leading figures then gathered to honor World Food Day at Expo 2015 in Milan, which has already been visited by over 20 million people.

The CFS was first launched in 1974. It forms an inclusive international and intergovernmental platform to promote coordination on norms and standards for food security and nutrition (FSN). This year, the committee agreed to place implementation of the sustainable development goals, especially Sustainable Development Goal 2 on ending hunger and malnutrition, at the center of its efforts through 2030. The multi-year work program is being developed with that in mind.

The CFS also hosts a number of side events during its meetings. This year, we, along with the rest of our Brookings team, were privileged to be selected to present the results of our research on our research on ending rural hunger. The project is the first to try and map where countries stand on the SDG hunger targets—at least the rural component. We compiled evidence on 80 indicators for 116 developing countries, as well as a further 26 indicators for 28 developed countries. These indicators cover measures of each country’s needs, policies and resources relevant to ending rural hunger. The results and interactive database (along with a full description of the research findings and underlying methodology) can be found at www.endingruralhunger.org.

The results show that more than a doubling in the rate of progress is required in order for the world to achieve its hunger goals for 2030. The 10 countries with the largest overall needs (see Figure 1) are located in sub-Saharan Africa. Several of these countries are low-income and fragile: for example, Eritrea, Chad, Liberia, Madagascar, and Niger. But we also found that every region has countries with specific types of hunger needs. In India, for example, malnutrition is as great as in many sub-Saharan African countries that have far lower income, and higher poverty levels. The Middle East and North Africa region is most susceptible to agricultural challenges arising from climate change and water scarcity. 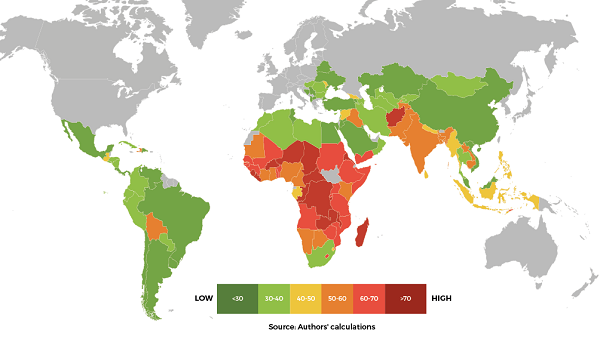 We also find that not all low-income countries have the same scale of problems in addressing hunger. Some have managed to reduce needs considerably through a variety of proactive steps: by implementing good policies to attract investments in rural areas, building strong institutions that give voice and priority to smallholder farmers, fostering the inclusion of women farmers, and improving local scientific and extension services. Benin, Burkina Faso, and Cambodia stand out on these measures.

But most low-income countries cannot fully address their considerable hunger challenges on their own. They need resources to invest in rural development. It is the combination of strong national policies and high levels of investment that helps end hunger. Public investments are needed in science and extension; in infrastructure to connect farms to market (e.g., rural roads); in irrigation and rural electricity; in improving farmers’ access to fertilizer, modern seeds, and credit; in organizing smallholders into cooperatives; and in providing rural social assistance. In the lowest-income countries, like Mali and Uganda, the available public resources are below $10 per rural capita per year. This is simply not enough to reduce rural hunger fast enough to meet the new global goals.

One of the primary benefits of the “needs, policies, resources” framework is that it allows us to assess how well developed countries are targeting their aid for food and nutrition security. Food aid, or humanitarian assistance, is of course directed to places where hunger is most extreme, but it deals with the symptoms of hunger, not the causes. If international assistance could be better targeted to places where needs are high, policies are strong, and resources are scarce, the impact on food and nutrition security could be increased. Unfortunately, our results show that the largest donors in food and nutrition security do not target their assistance particularly well. Figure 2 charts each country’s quality of FNS aid (based on a composite score, including targeting) to its volume of FNS aid as a share of national income. 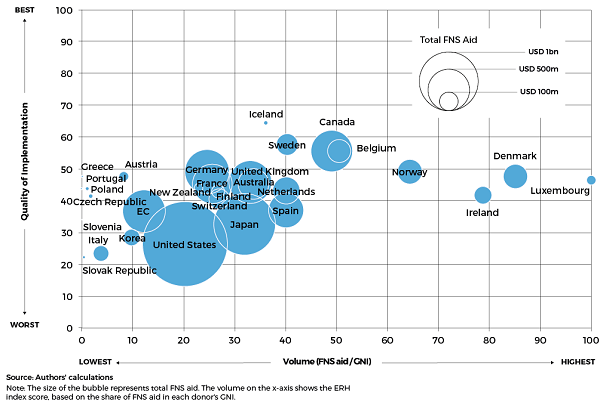 Our research also shows that, in recent decades, donors’ attention to and funding for food and nutrition security has oscillated along with global food prices. When prices spike, donors commit more aid, but as prices decline (as they inevitably do), attention wanes and resources are allocated to other priorities. There is a need to sustain political commitment through 2030 if ending hunger is to become a reality. There are reasons to hope this could happen: the G-7 have committed to this agenda at their last meeting at Schloss Elmau; the African Union has committed to it in the Malabo declaration; and many other leaders of multinational corporations and civil society organizations have embraced it too. If the will is there, the resources can be found. We note that developed countries spend around $250 billion per year on subsidies for their own farmers (and an additional $22 billion in biofuel subsidies and mandates), but only $11.6 billion per year in aid for food and nutrition security in developing countries.

Better collective action is also needed to improve the efficiency of global and national markets for food; to build the science and research knowledge base for drought-tolerant and flood-resistant seeds; to develop improved techniques for building resilience into agricultural production; and to improve smallholder yields. We do not necessarily need more partnerships, but rather stronger partnerships. These need to engage governments, multilateral agencies, business, academia, and civil society.

A hint that such partnerships are starting to form was given at a high-level “Finance for Food” event at the Milan Expo 2015. There, leaders of multilateral development banks, commercial banks, and large insurance companies talked about how they were collaborating to reduce the risk of financing agriculture and to get more money to small farmers. The discussions centered on how new technologies and new business models that better distribute risk could be scaled up to reach the 2.5 billion people who still depend on 500 million small farms worldwide. It is this kind of transformative change that will be needed to end hunger by 2030. Our research suggests this is an ambitious, but achievable goal.

Why developing country voices will shape the global climate agenda