Do United Nations summits matter? Many people have undoubtedly asked themselves that question in recent weeks as media headlines described otherwise unlikely gatherings of world leaders and celebrities linked to the adoption of the new sustainable development goals (SDGs) for 2030. After all, how often do Ban Ki-moon and Beyoncé cross paths on the same stage?

In our recent paper, “Who talked (and thought) about the Millennium Development Goals?” (MDGs) we find that summits definitely matter—not just for policy agreements, but also in stimulating public discussions. The paper takes a by-the-numbers look at references to the MDGs—the predecessors to the SDGs—across a range of English-language print media, academic journals, and policy research papers of multilateral development banks.

Over the period from 2000 through 2014, the MDGs were most commonly referenced across major newspapers in the years when the U.N. convened relevant major summits: 2005, 2008, and 2010 (Figure 1). Within each of these years, the article count in September, the month when high-level U.N. meetings occurred, was at least two times higher than in any other month. September 2005 was indeed the month with the highest intensity of MDG references across the entire sample. What is more, January 2005 saw the highest number of MDG references for any non-summit month in the sample. This was linked to the launch of the U.N. Millennium Project’s recommendations for achieving the MDGs. 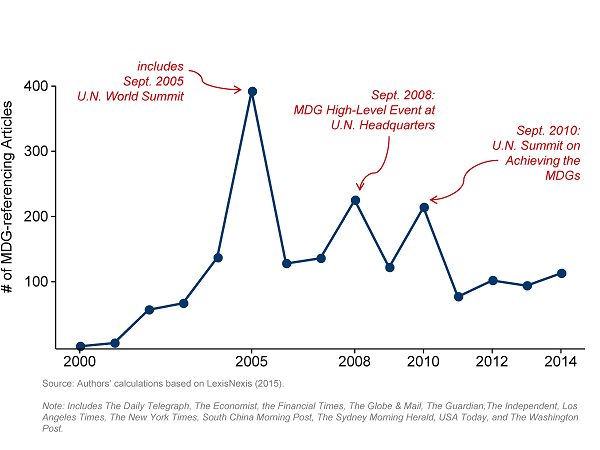 SDG advocates aiming to build the public profile of the new “global goals” will be building from highly varied MDG baselines across different media markets. For example, most U.S. media outlets paid very little attention to the MDGs since their inception (Figure 2). This compares to more significant coverage in the U.K., the first G-7 country to fulfill the longstanding official development assistance target of 0.7 percent of gross national income, where stories were largely driven by the Financial Times and The Guardian. Among developing countries, major papers from India (Hindustan Times and The Times of India) and Nigeria (Vanguard) had considerably greater average MDG coverage, with South Africa’s The Star not far behind. 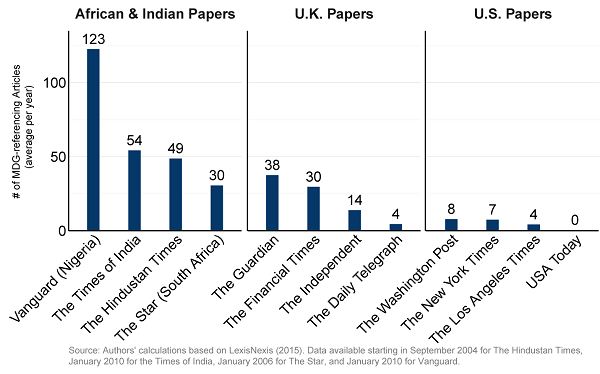 In academia, the goals seemed to register in only a few scientific journals, The Lancet and World Development being the quantitative standouts in the sample (Figure 3). World Development had the largest percentage of articles referencing the MDGs, while The Lancet had the largest absolute number, at more than 1,200 over the period. Even though many of its articles were opinion pieces and news stories, The Lancet still had more original research articles referencing the MDGs than any other journal in the sample. By comparison, the major economics journals had very few references to the MDGs. In this light it is probably not a coincidence that global health saw the most significant MDG breakthroughs. The policy gains in this realm were underpinned by a robust long-term academic debate. 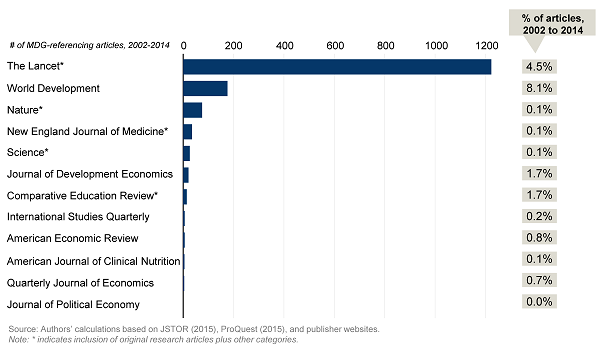 4. Multilateral Development Banks had limited research focus on the MDGs

The World Bank and regional development banks’ policy research papers paid only modest attention to the MDGs. The World Bank has the most extensive database for these types of papers. From 2002 to 2014, the institution published an average of 338 policy research papers per year, of which only around 22 per year (or 6.5 percent) even mention the MDGs. Corresponding MDG references in papers by the Asian Development Bank and the Inter-American Bank are similarly low, ranging from around 1 to 2 percent of their respective annual totals. The lack of MDG-referencing research mirrors the limited attention in academic economics journals. 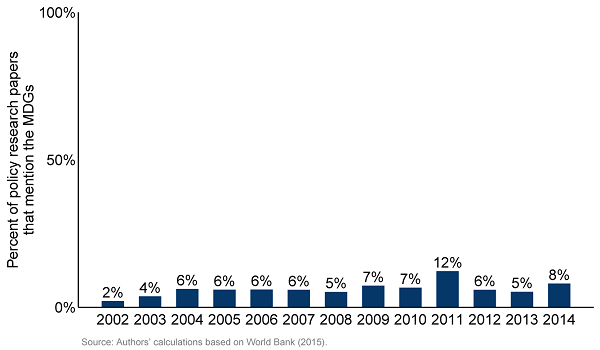 5. Public SDG conversations are well ahead of MDG pace

There are signs that the emerging SDG discourse could already be much richer than the early years of the MDGs. The right side of Figure 5 counts SDG references, starting in 2012, for the same 12 global newspapers as in Figure 1. It shows that, during the first half of 2015, there were already more references to the SDGs than there were to the MDGs during in all but the peak years of 2005, 2008, and 2010. Depending on how global conversations evolve through the rest of this year, 2015 might well see more references to the SDGs than the MDGs saw during any year of their tenure. A caveat is that the majority of SDG stories through June 2015 have come from one publication, The Guardian, and so the intensity was not equally widespread. By January 2016, it will be possible to address the broader trends. 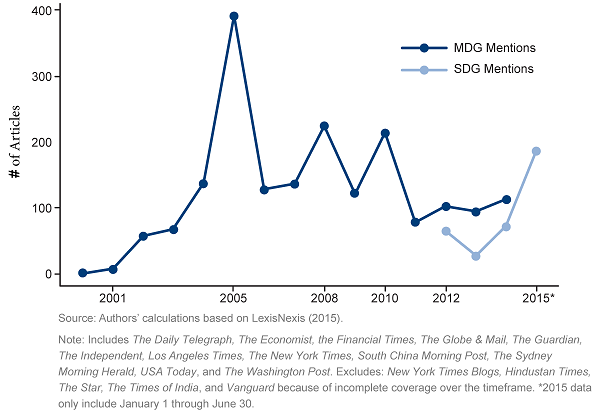 What to make of it all?

The new global goals represent an agreed-upon set of norms to which international cooperation will aspire through to 2030. The policy challenges are even more ambitious than the MDGs.  In order to be achieved, they will require ample public and scientific debates. Those will need to diffuse much more broadly and deeply than the MDG-linked deliberations of the past 15 years.