Nearly one in five rural Bosnians is poor, and a rural dweller in Bosnia is twice as likely to be poor as his city-dwelling compatriot. That matters when you consider that the poverty threshold is based on minimum calorie requirements and other basic life essentials. And it matters even more in a country where 60 percent of people still live in the countryside, unchanged since Yugoslav times.

In Bosnia, rural life has been declining over the past 20 years. Literally. It’s not unusual to see half-deserted small towns or villages in rural Bosnia. And it is easy to understand why. Bosnia’s population declined from a pre-war peak of close to 4.4 million people to just 3.8 million according to the 2013 census—a fall of 13 percent. Rural areas have shared an equal proportion of this decline with urban ones.

I grew up in a small village of 400 people in rural England and, while I’m a fan of cities for many reasons (most eloquently described by Ed Glaeser), rural livelihoods take on a particular importance in the Bosnian case. Why should there be a focus on rural livelihoods in Bosnia?

More mobile than it first seems

Even though a constant 60 percent of the population have been classified as rural for the last 20 years, they are more mobile that it first seems. While municipalities with very low population densities (fewer than 50 persons per square kilometer) did indeed shrink between 1991 and 2013, medium-density municipalities (50 to 100 persons per square kilometer), which are still classified as rural, grew in size, both in absolute terms and as a share of the population. They absorbed people from the very small settlements and also from dense city centers. A recent study confirms these findings and reveal similar patterns in several other European countries. Most visibly, change in night-time lights show that many rural areas in Bosnia grew darker between 1996 and 2010, while suburban and peri-urban areas grew brighter. 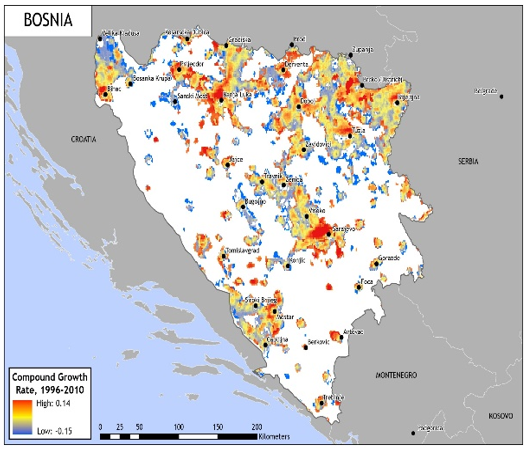 And rural dwellers don’t seem to be doing badly in other ways. Within 3 km of their homes half of rural Bosnians have a clinic and a primary school, and a third can reach a post office. A quarter have a shop within just 100 meters. That gives most rural Bosnians much better access to services than I had growing up in my home village. The same survey found that rural and urban families have similar rates of child vaccinations, child sickness, secondary school attendance, literacy, and access to drinking water. Child malnutrition was even slightly lower in rural areas than in urban ones. Rural dwellers perceive themselves as having several advantages over urban ones; the food, environment, and health are all considered by rural dwellers to be better in the countryside. Administrative data from the Republika Srpska even suggests that rural wages were only 9 percent lower than urban wages in 2012 (and the gap narrowed from 12 percent in 2007). And there’s the rub.

Even though the rural poverty rate is higher, rural income lower, and employment somewhat lower, rural folk still don’t want to search for streets paved with gold in Bosnia’s cities. A reasonable quality of life in rural areas combined with the challenges of urban life keep people in rural areas. Rural households have reasonable (if improvable) access to services, some have an “agricultural safety net,” receive relatively high social protection payments, and have better food, environment, and health than urban dwellers. Moving to a city with high unemployment, low wages, and a belief that connections are important to obtain jobs is probably not worth the risk for many rural dwellers.

In addition, many rural people would face the same constraints in Bosnian cities as they do in the countryside. World Bank analysis suggests that half of the rural-urban poverty gap can be explained by educational differences. But poorly educated rural dwellers would also have very few options in the cities. Another one-fifth of the rural-urban poverty gap comes as a result of larger average family size in the countryside and large families in cities are also more likely to be poor.

With neither the “push” nor “pull” factors to encourage rural Bosnians to urbanize, it is little wonder the rural population has remained stagnant over the last 20 years. Those who do urbanize prefer to leave for cities in Austria or Germany, where at least the pull factors are stronger than in Bosnia.

Will COVID-19 create a new surge in poverty in the Western Balkans?

Did the EU’s economic recession lead to a rise in populism?