I just turned a year older and, to make myself feel better, I calculated how many other humans did so on the very same day. Any idea? By my count some 20 million: just divide the current world population (7.29 billion) by 365. This is a rough count as birthdays are not distributed evenly across the year and some months are indeed more fertile than others (there is for instance a small boost of “Christmas babies” in the Northern hemisphere) though the differences are small.

Now, how many of those share my—or your—precise birth date (not only the same day but the same year as well)? On average some 285,000 (that’s 20 million divided by the global life expectancy of 72 years). If you want to get down to the hour, just further divide that number by 24, and you get around 12,000 people. Likewise, on average some 200 are likely to have discovered the world the very minute that you did (and to still be alive to see it today).

Obviously, these averages mask stark differences across the age distribution. If you’re the parent of an infant who just turned one, you probably blew that one candle alongside 368,000 other families. By contrast, if you are already 45 years old, which I will be in one year, then the number drops to 255,000 people—still a decent amount equivalent to three times the full capacity of Rio’s Maracana stadium (where the World Cup final was played last year). If you turned 60 this year, as the other two editors of this blog recently did, you probably celebrated your birthday together with only about half that many people—some 172,000, still enough for a lively Woodstock revival party.

But who are all these birthday buddies out there? As expected, a good amount are likely to hail from the world’s most populous nations: China, India, and the United States. But a closer look through this demographic lens reveals the shape and the magnitude of global population shifts (see table):

Where Are Most of Your Birthday Buddies? 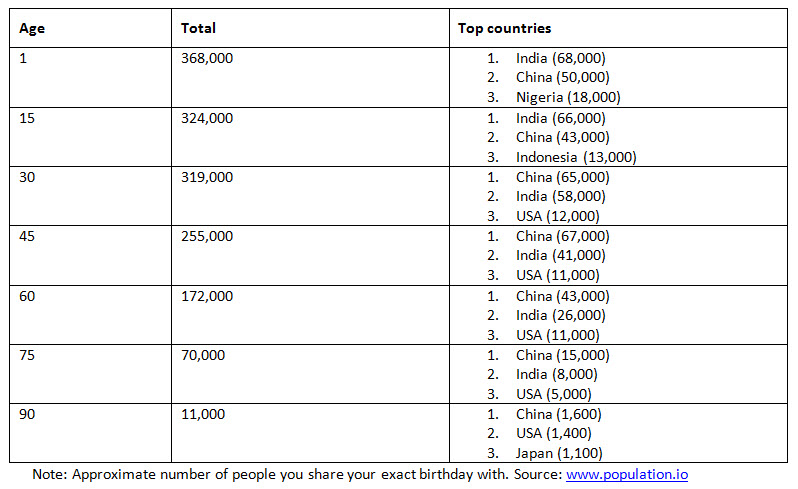 In one way, working out this simple math, I did become a bit wiser with age. One lesson from this exercise is that we can mirror the world’s big demographic shifts simply by modelling the distribution of birthdays in the world. Future development will be increasingly shaped by India, and at some point also Nigeria and its African peers. Another lesson is that the number of your “birthday buddies” is declining sharply once you reach your sixties. While global life expectancy has increased dramatically—now at 72 years—many of the poorer countries are still catching up. Even though we are all living longer, life is still too short especially in the developing world.


Editor’s Note: This blog builds on a