Although both the Republican and the Democratic nominating conventions are coming up soon, both parties effectively decided on their nominee long ago. Trump secured the GOP nomination in May, when both Senator Ted Cruz and Ohio Governor John Kasich dropped out, and Clinton secured the necessary number of delegates for the Democratic nomination in June, despite the persistence of her challenger, Senator Bernie Sanders.  But the presidential nominees will not be alone on the ballot in November—and the primary season for those congressional seats is just over halfway finished. Much has been said so far about the impact of Hillary Clinton and Donald Trump on congressional candidates, either in the primary or in the general, but little has been tested empirically. In the second cycle of the Brookings Primary Project, we have taken exit polls from congressional primaries to see what effect—if any—the presidential candidates are having down ballot. The answer so far: Not much.

First, the Democrats. So far, 26 Democrats have successfully beaten primary challengers, and 39 were running uncontested in their primary (this does not include the 49 incumbents—of either party—that successfully won their primary in California). Only one sitting Democratic congressman—Representative Chaka Fattah, who represents part of Philadelphia—was overtaken by a primary challenger. Rep. Fattah has been in Congress since 1995, but was indicted on 29 charges of corruption including bribery and racketeering.  As we’ve highlighted before, the voters did not choose an outsider to replace him—the winner of the primary, State Representative Dwight Evans, has been in the Pennsylvania legislature for 35 years.

Although we haven’t polled every district, we were lucky enough to choose PA-2. In the chart below, we split the votes for congressional candidate by a respondent’s presidential choice. 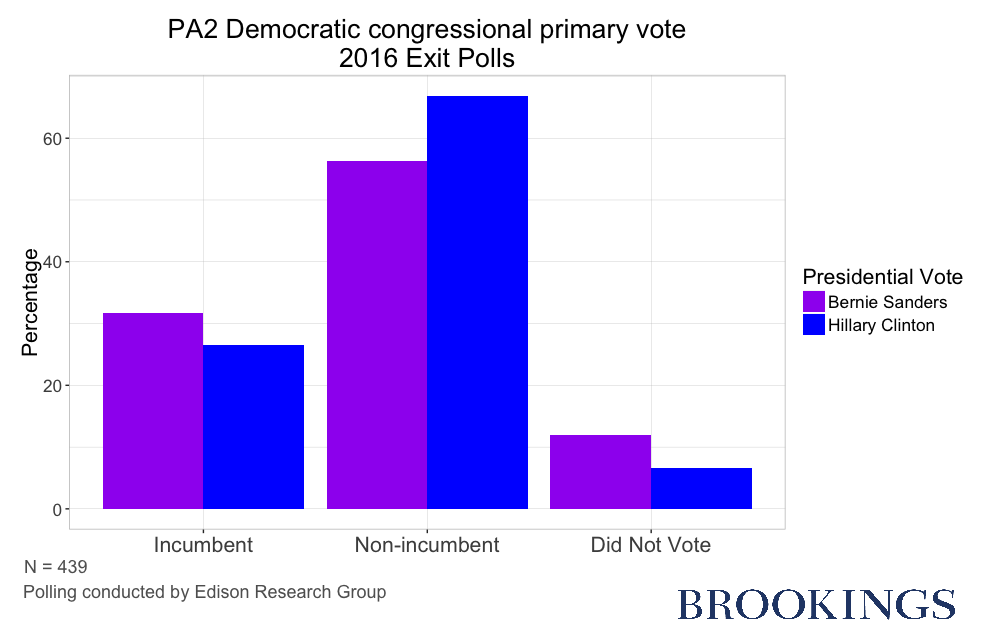 As you can see, the overwhelming majority of both Clinton and Sanders voters chose the non-incumbent. Sanders voters were slightly more likely to choose the incumbent member of Congress, which is highly ironic considering Rep. Fattah was accused of taking a one million dollar campaign loan in 2007 and then fraudulently routing federal grant and nonprofit money to cover it up. He was convicted on June 21.  Sanders supporters were also slightly more likely to not vote for a congressional candidate.

On the Republican side, two incumbents out of 76 incumbents facing challengers have lost their seats so far, both due to redistricting. First, on June 7, Representative Renee Ellmers lost her seat in North Carolina’s CD-2. Ellmers was elected in 2010 during the Tea Party wave when she unseated a long-time democratic incumbent. This time around, Ellmers lost to another GOP incumbent, Representative George Holding. Holding formerly represented the 13th district, but ran in the new 2nd district after a court mandated that North Carolina redraw the map. The new 2nd district included much of Holding’s old constituents.  Just one week later, in the June 14 Virginia primary, another Republican incumbent fell victim to redistricting. Representative Randy Forbes, previously of Virginia’s 4th District, sought reelection in the 2nd District after the 4th was mandatorily changed to include more democrats. Although VA-2 was open (vacated by Scott Rigell), Forbes lost to state Delegate Scott Taylor.

Although we did not sample these districts, we used data from the six Republican primaries that we have polled so far to see if Trump voters were driving an anti-incumbent wave. 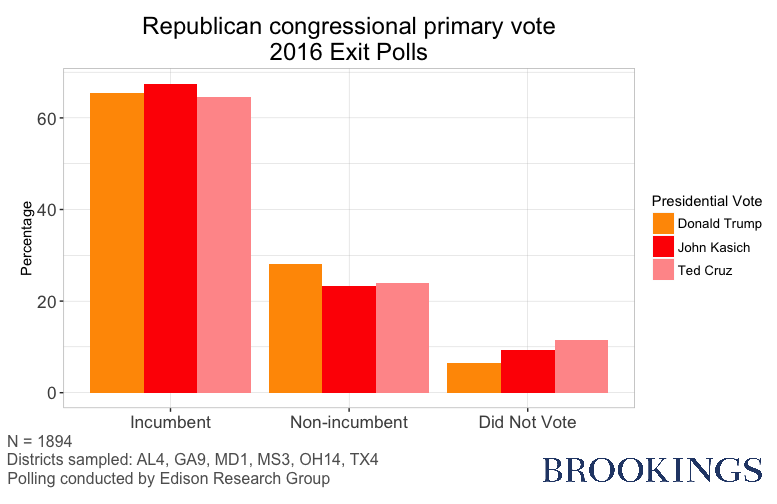 Similarly to the Democrats, voters for all the presidential candidates in Republican primaries uniformly chose to vote for their sitting representative. A slightly higher percentage of Trump voters chose the non-incumbent, but this difference was not statistically significant. Trump voters were also the least likely to not vote in the congressional race, dispelling the earlier fears that Trump voters would only show up to vote the top of the ticket.

This does not include how voters are making choices in open primaries (which you could argue mimic the presidential choice more closely, since there is no sitting president.) There are more open seats on the GOP side, which we will investigate in future blog posts. So far however, it doesn’t appear that Trump or Sanders had much of an effect down-ballot. Whether this holds true for the general election remains to be seen.