The tempest over the single vacancy on the Supreme Court has obscured the increase in vacancies on the federal district courts, where most federal judicial work gets done.

Like his three recent two-term predecessors, President Obama faces a Senate controlled by the other party. All four presidents, in their first six years, saw between 200 to 250 district confirmations. From January of their seventh year into mid-April of their eighth year, each president submitted, or resubmitted, around 50 to 60 district nominations.

Similarities end with confirmations in that same period. The (opposition-party) Senate confirmed 42 of Presidents Reagan’s, 28 of President Clinton’s, 38 of President Bush’s district nominations, but only 15 of Obama’s. 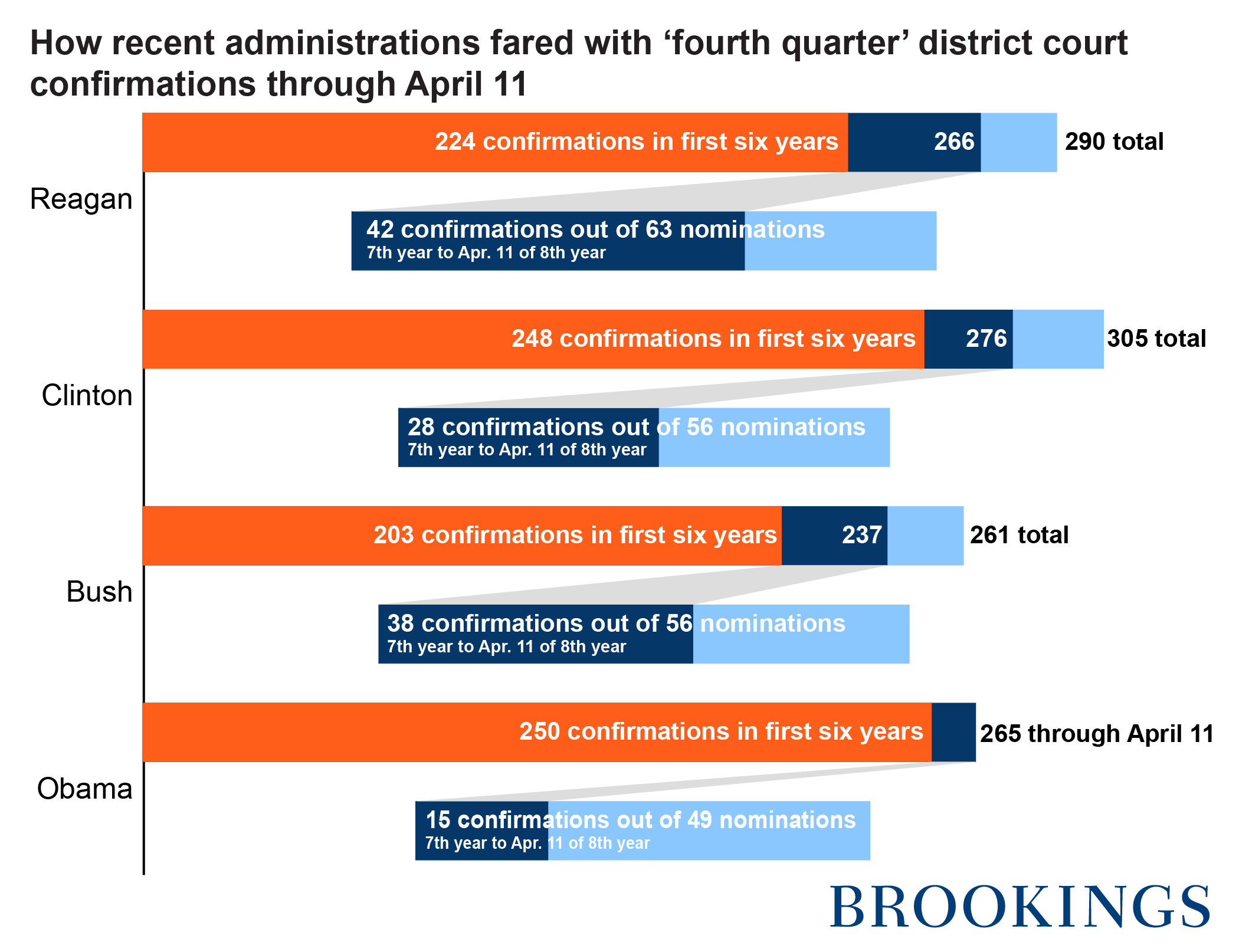 Largely because of that, district vacancies have almost doubled, from 33 at the start of 2015 to 65 in mid-April. In the comparable time periods for Reagan and Bush, district vacancies declined slightly; for Clinton they increased, but came no where near doubling. The ten percent vacancy rate nationwide (65 of 673) has regional variations. Nine of Texas’s 51 judgeships (18 percent) are vacant, for one egregious example.

And vacancies can only rise the rest of Obama’s term. Thirty-three district nominees are pending at some stage in the Senate. The Senate’s confirmation pace since January 2015 suggests that only a handful of them will get confirmed.

Vacancies, though, will only continue to increase. Seven currently active district judges have already announced they will leave active status by early 2017. But if the past is any guide, more than seven additional vacancies will materialize by the time Obama leaves office. In mid-April of 2008, 11 district judges had announced their intention to leave active status. In fact, by inauguration day 2009, 27 had done so. In mid-April of 2000, eight district judges had said they would leave full-time service. By inauguration day 2001, 19 had done so.

So do the math: There are 65 current vacancies. Assume—generously—that the Senate confirms ten more district judges. To the resulting 55 vacancies, add the seven currently announced future vacancies. Add to the resulting 62 vacancies at least 10 and likely more, based on what happened in Presidents Clinton’s and Bush’s final nine months in office. In short, the next president could face 75 or more district vacancies, or 11 percent of all district judgeships.

Finally, it’s true that the Senate can’t fill a vacancy that has no nominee. Of the 32 nominee-less vacancies; 23 of them are in states with at least one Republican senator, some of whom are likely using their “blue-slip” prerogative to prevent successful nominations.

The picture is less dramatic for the courts of appeals. The current nine circuit vacancies are fewer than they were at this point for the three previous two term presidents.

Four circuit judges have announced they will leave active status later this year, creating at least 13 total vacancies, or a seven percent vacancy rate. The two circuit confirmations since January 2015 are likely to be the last of Obama’s term. 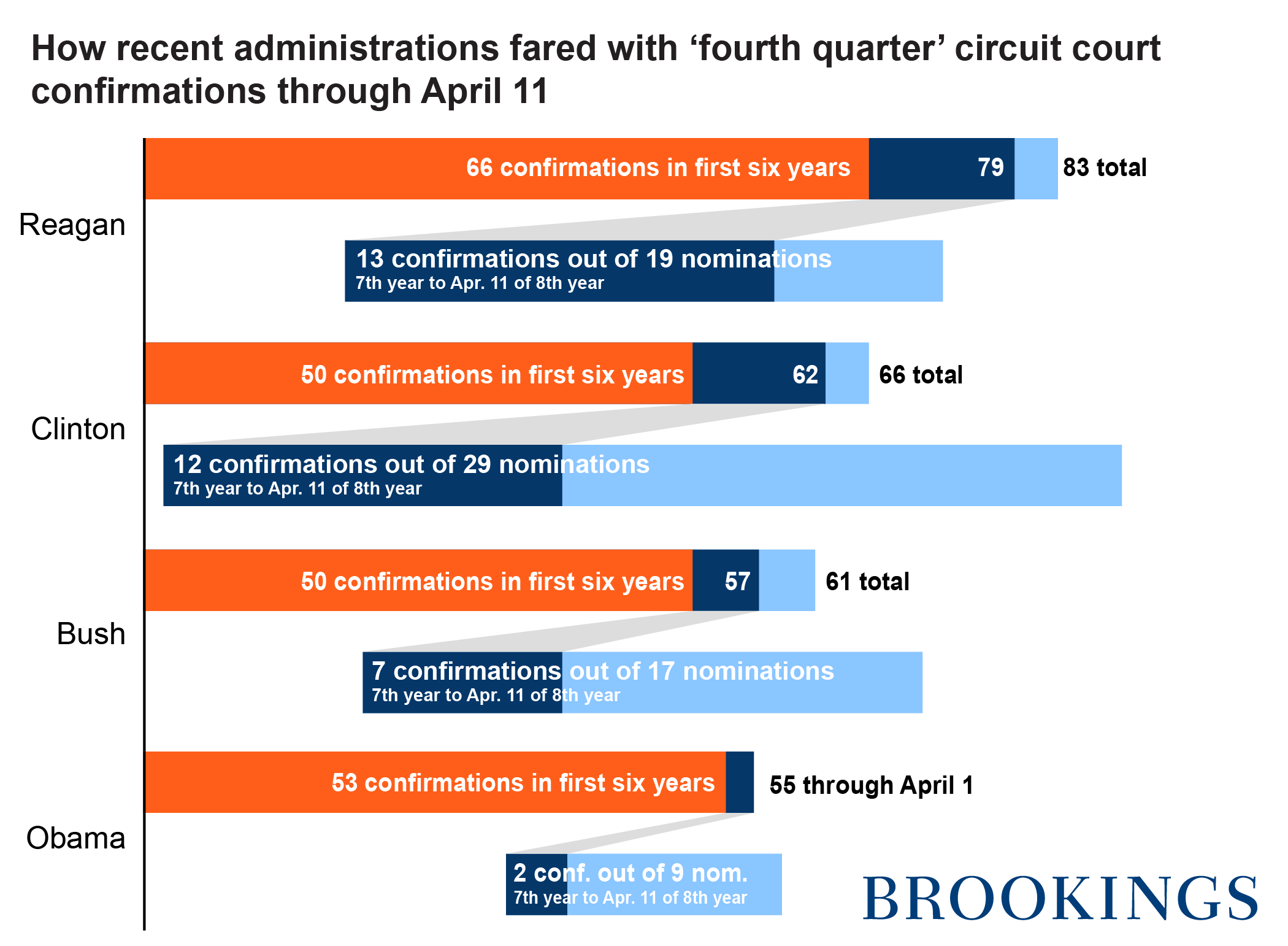