It’s no secret that Americans are more politically polarized than ever before. Democrats and Republicans may live in the same world, but partisan beliefs drive Americans from opposite sides of the aisle to see that world in very different ways. Past research has shown that partisans will often perceive the same events—from a hostage crisis abroad to objective markers of an improving economy at home—in completely divergent ways based on their preconceived and firmly held political convictions. The partisan lens through which many view the social and political world also impacts perceptions of discrimination: as the Public Religion Research Institute’s 2015 American Values Survey shows, Democrats and Republicans have a very different understanding of the nature of discrimination in the U.S. today—and who are the most likely targets of it. 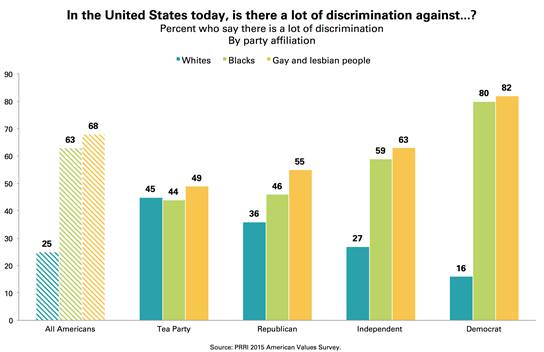 Attitudes on the amount of discrimination faced by another prominent minority group in America—gay and lesbian people—are also, unsurprisingly, divided along party lines. More than eight in ten (82 percent) Democrats believe that there is a great deal of discrimination against gay and lesbian people in America today. Only about half of Republicans (55 percent) and Tea Party members (49 percent) say the same.

And on questions about the discrimination faced by various religious minority groups, such as Muslims—whose presence in the U.S. have taken center stage in the political debate in the wake of the attack in San Bernardino—the partisan gap persists. Nearly eight in ten (79 percent) Democrats say Muslims face a large amount of discrimination in America today, while a smaller proportion of Republicans (59 percent) and Tea Party members (51 percent) say the same. 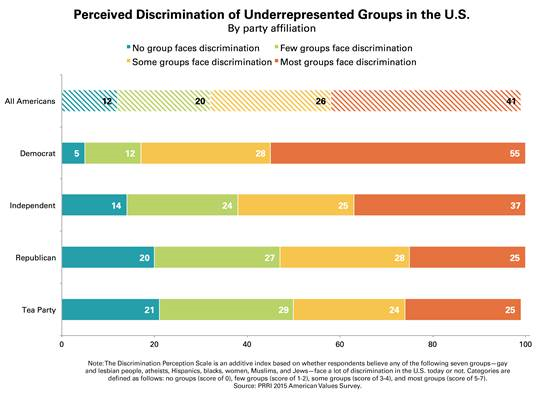 The partisan contrast on this scale is significant: only five percent of Democrats believe that none of these groups face a lot of discrimination in the United States today. In contrast, Republicans (20 percent) and Tea Party members (21 percent) are four times as likely to express the same view. At the other end of the scale, a majority (55 percent) of Democrats perceive that most of these groups face a considerable amount of discrimination. In contrast, only one-quarter of Republicans (25 percent) and Tea Party members (25 percent) agree that this many underrepresented groups are facing a lot of discrimination.

Overall, the pattern is clear: there is considerable daylight between those on the left and those on the right when it comes to perceptions of discrimination in America today. Perhaps then, it is not surprising that Democrats and Republicans have such divergent opinions on issues ranging from black Americans’ protesting unfair government treatment to legislation protecting gay, lesbian, bisexual, and transgender people from discrimination. If you don’t perceive discrimination against certain underrepresented groups or marginalized communities to be especially severe or widespread, then these protests and policy proposals might appear to be solutions in search of a problem. If, however, you believe that the discrimination against these groups is particularly severe, then such protests and policy demands are understandable and perhaps even a necessity.

Dr. Betsy Cooper is a research associate at PRRI and specializes in survey research, American politics and LGBT issues. Dr. Cooper holds an MA and a PhD in Political Science from the University of Washington.

Rachel Lienesch is a research analyst at PRRI and has conducted research about American elections and the Tea Party. Ms. Lienesch holds a BA in Government from the College of William & Mary.