In 2000, Republican George W. Bush ran for president as a “compassionate conservative.” At the beginning of his first term, he pushed for faith-based initiatives, which sought a greater role for religious non-profits to provide federally funded social services, and he championed the No Child Left Behind Act, which required all public schools to meet tough standards to qualify for federal funding. As Bush said in defense of his approach, “Government cannot solve every problem, but it can encourage people and communities to help themselves and to help one another. Often the truest kind of compassion is to help citizens build lives of their own.”

By the end of the decade, long after Bush’s own presidential priorities had been altered by the events of 9/11, little talk of compassionate conservatism could be found among Republicans. With the rise of the Tea Party movement in response to the election of Barack Obama and the passage of the Affordable Care Act, Republicans successfully captured control of the U.S. House and many state legislatures in 2010, and calls for compassionate conservatism gave way to austere calls to reduce the size and scope of government. Republicans appear poised to repeat their success in the current 2014 midterm elections.

But another repeat scenario may unfold if the Republican Party believes its electoral success in 2014 is an endorsement of its policies rather than a referendum on the uneasy state of the national economy. In 2012, Republicans ran on similar themes as 2010, hoping to roll back Obamacare, cut taxes, and reduce big government—yet Obama handily won re-election.  Data from the 2014 American Values Survey (AVS), conducted by Public Religion Research Institute, shows why such a Republican strategy to embrace Tea Party themes in 2016 would likely not work, regardless of what works in this year’s midterms.

By a margin of 2-to-1, there is solid support (66 percent) among Americans nationally for the notion that the government should do more to reduce the gap between the rich and the poor.  By contrast, only 29 percent of Republicans who are part of the Tea Party agree with that sentiment, which is significantly lower than non-Tea Party Republicans (43 percent). However, turning from this more general sentiment to a specific policy that would affect the pay of lowest income workers—raising the minimum wage—the AVS finds that 68 percent of Republicans who identify as part of Tea Party oppose this effort, compared to just 28 percent of Americans more generally.  By contrast, only 45 percent of non-Tea Party Republicans and 39 percent of White Evangelical Protestants—the other base Republican constituency—opposes raising the minimum wage. 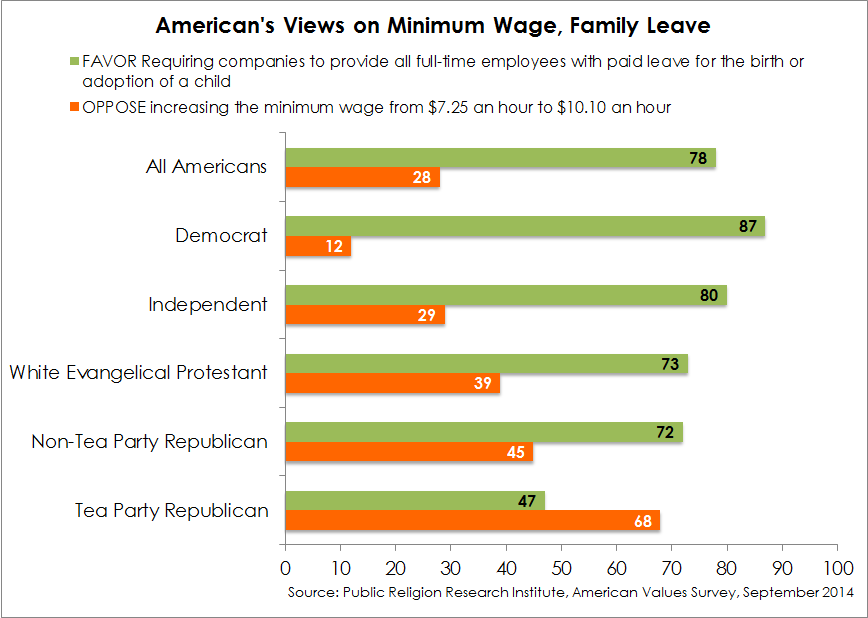 Tea Party members hold even more of an outlying position when it comes to family leave.  Overwhelming majorities of Democrats, Independents, and non-Tea Party Republicans support requiring companies to provide full-time employees with paid family leave for the birth or adoption of a child. Yet only 47 percent of Republican Tea Party members support this position, which is again at odds with White Evangelical Protestants, 73 percent of whom support this policy.

Neither policy has gotten much traction in Congress or state legislatures currently controlled by Republicans, as free-market conservatives believe they represent burdens that inhibit job growth. However, research suggests that neither paid family leave nor raising the minimum wage are the “job killers” often portrayed by Tea Party groups.  Republican leaders may want to reconsider their staunch opposition to these broadly popular measures as Democrats plan to seize on public support for these policies, as indicated by Hillary Clinton’s recent appearance at the Center for American Progress’s event on Women’s Economic Security, in which she touted the importance of raising the minimum wage and enacting paid leave to help struggling American families. The best prescription for Republicans in 2016 may well be to reject the positions held by Tea Party and free market groups on these issues and instead take a page from George W. Bush’s “compassionate conservative” playbook, supporting government-mandated paid leave policies and minimum wage increases as a means to encourage people to “help themselves” and “build lives of their own.”