Editor’s Note: This blog post is part of The Primaries Project series, where veteran political journalists Jill Lawrence and Walter Shapiro, along with scholars in Governance Studies and the Campaign Finance Institute, examine the congressional primaries and ask what they reveal about the future of each political party and the future of American politics.

On September 30 Brookings hosted the event, What the 2014 Primaries Foretell About the Future of American Politics, displaying the culmination of research by the Center for Effective Public Management and the Campaign Finance Institute on the 2014 congressional primary season. The two-hour event featured two panels, one on the future of the political parties, and one on spending in primary elections. 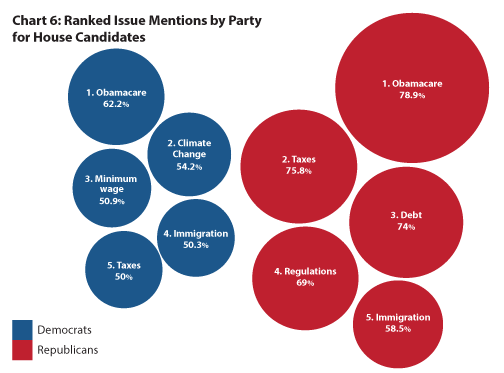 As veteran political journalist Jill Lawrence observed on the panel, “Full out repeal [of the Affordable Care Act] was the price of admission into the Republican primaries.” Despite being the most frequently mentioned issue in both parties, Democratic candidates were noticeably more divided in their approaches to discussing Obamacare. Where 74% of Republicans outright opposed Obamacare, only 36% of Democrats were staunchly in favor, with 26% offering a more nuanced position.

As Kamarck has pointed out before, what candidates are not talking about is just as revealing as what they do talk about. This is particularly evident when looking at minimum wage; rather than take a stand against raising it, 93% of Republican primary candidates simply failed to mention the issue.

The second panel, featuring research from Michael Malbin and Robert Boatright from the Campaign Finance Institute, looked at the context of the congressional primaries and spending by outside groups on primary races. CFI’s data revealed that the balance of independent expenditures among conservatives shifted from favoring the anti-establishment wing in 2012 to the establishment in 2014. As Boatright pointed out on the panel, “2014 could rightly be described as the counter-mobilization of the political establishment.” 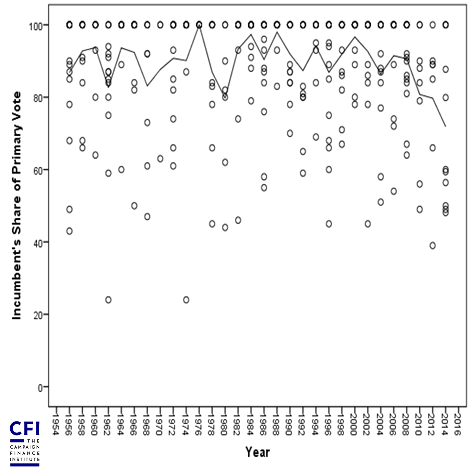 In addition, Boatright looked at the number of primary challenges in the House and Senate races over time. While incumbents still overwhelmingly win their primaries, some of the data suggest there were more “close calls” this year than usual. The chart above shows the Republican incumbents’ share of the primary vote decreasing over time.

» Robert Boatright’s look at the historical context of primaries

»Watch the archived webcast of the event here