Editor’s Note: This blog post is part of The Primaries Project series, where veteran political journalists Jill Lawrence and Walter Shapiro, along with scholars in Governance Studies and the Campaign Finance Institute, examine the congressional primaries and ask what they reveal about the future of each political party and the future of American politics.

A great deal of attention has been paid to the existence of independent expenditure groups and to the billionaires who fund them. The Koch brothers and Sheldon Adelson, right wing billionaires in politics, and Tom Steyer, the newest left wing billionaire in politics, seem to have had nearly as much ink spilled on them as have the candidates and causes they endorse.  And no wonder. Americans are fascinated and worried about the question Darrell West poses in the second chapter of his new book Billionaires, “Can rich dudes buy an election?”

Tracking the sources and amounts of money in post Citizens United elections is a full time and complex job. Our hats go off to the Campaign Finance Institute who has recently completed the most extensive study ever of the role of independent expenditures in primary elections. Michael Malbin, Founding Director of the Center and author of the upcoming report on this year’s primaries, shows us just how big these groups, often funded by billionaires, have gotten.  In research focusing on independent spending in the 2014 congressional primaries, Malbin points out that in the 15 House races with the most independent expenditure money ($500,000 +) these expenditures counted for 76% as much as the candidates own campaign money. In Senate races, the independent expenditures accounted for 44% as much as the candidates own money.  Even the candidates themselves are worried about this trend since it often seems that outside groups can swamp a candidate’s own message.

Malbin also shows us why it is so hard to figure out what’s going on in an individual election. Only 49 of the 281 organizations that were around in the 2012 cycle spending money on behalf of congressional primary candidates were also around in 2014. That means that there were 232 new and different groups playing in 2014, posing challenges for the journalists and academics trying to track them. 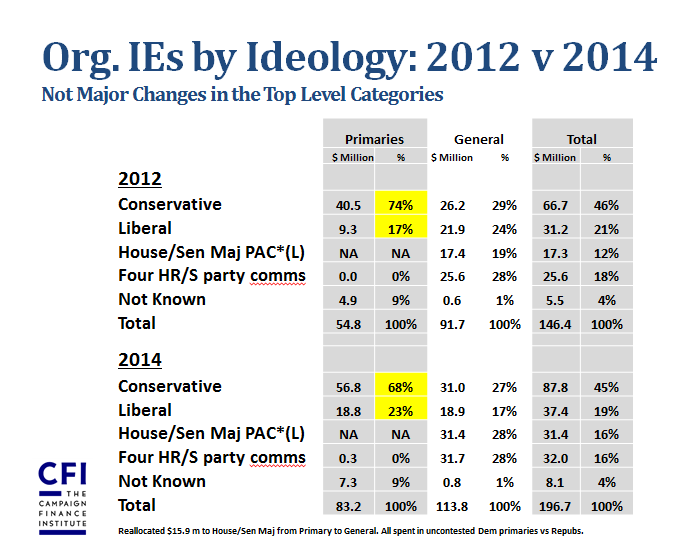 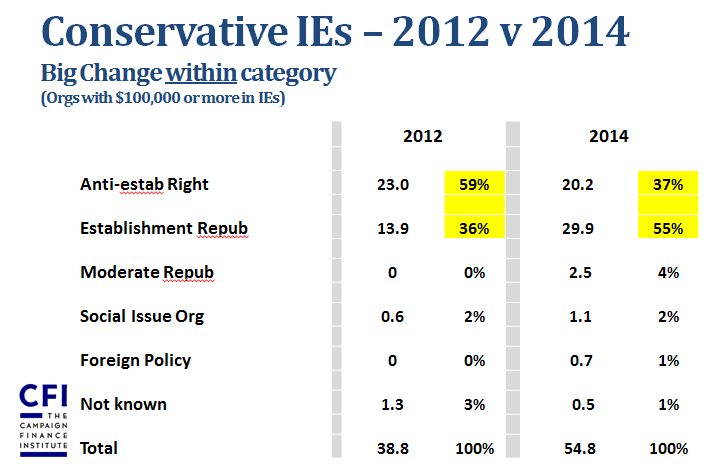 There’s something for everyone in these findings. For the Democrats who have been on the defensive for much of this year but who have gotten through a primary season with few internal divisions, the increase in spending on their behalf and the sense that they will be able to run a good ground game in the key states where it really counts is a plus.

For the Republicans, the heavy spending by establishment groups has paid off in that they haven’t let weak candidates slip into the general election contest. They are probably as strong as they can be going into the fall campaign.

Nonetheless, tracking the money in this new election environment is a complex and full time job. And Darrell West’s question still hangs over us—“Can rich dudes buy an election?”