Editor’s Note: Based on her research on state legislation and the efforts and influence of ALEC in the states, Molly Jackman details the policy areas that ALEC engages. The post comes in response to a question from the Sunlight Foundation’s Alexander Furnas.

Last week, I wrote an article describing new data that I collected on ALEC bills introduced in the U.S. states during the 2011-2012 legislative session.  The release of these data came on the heels of the ALEC policy summit in Washington, DC, where journalists caught a glimpse of the process by which corporations and state legislators collaborate to write ALEC model bills that can then be introduced in the states.  My data shed some light on just how much influence those model bills have on state policy.

Over the next few months, I look forward to digging deeper into these new data to answer the variety of questions that they raise – some of which have already been brought to my attention through email and social media.  Today, I’ll start by addressing one posed by Alexander Furnas of the Sunlight Foundation via Twitter.  One of the findings I reported was that 10% of the bills in my sample were sponsored by Democrats – a surprising result given ALEC’s strongly conservative ideology.  Mr. Furnas asked me to describe the subjects of those bills.

In total, Democrats introduced 11 bills that resembled ALEC model legislation.  Importantly, despite the fact that nearly 10% of ALEC bills introduced in the states passed, none of the bills that Democrats sponsored even made it to a floor vote. 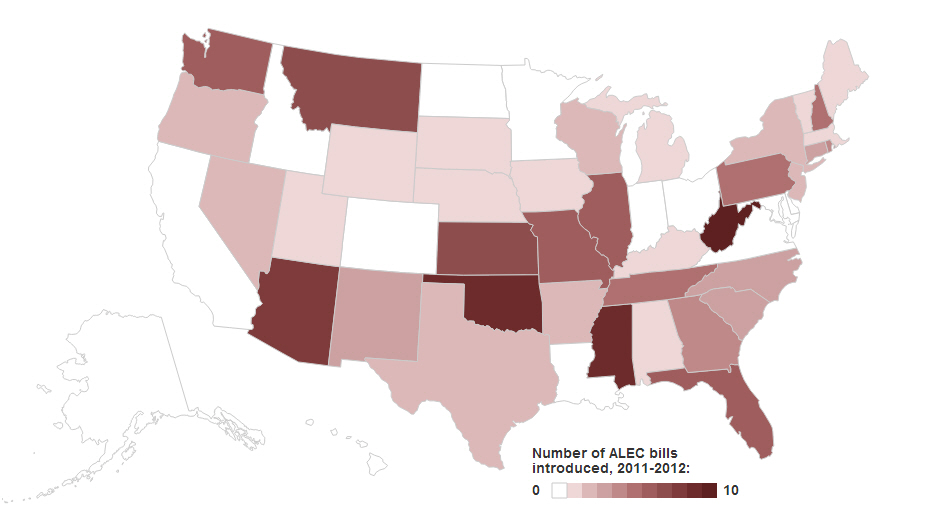 Map: ALEC’s influence in your state

Nearly half pertained to hydraulic fracturing, or fracking: Democrats introduced iterations of ALEC’s “Disclosure of Hydraulic Fracturing Fluid Composition Act” in Illinois, Nebraska, New Mexico, Pennsylvania and Wyoming.  The act, which the New York Times revealed was written by ExxonMobil, requires the disclosure of chemicals in drilling fluids used to extract natural gas by fracking. A close reading of the bill, though, reveals loopholes that allow energy companies to withhold the names of materials that are considered trade secrets.

Rhode Island saw three instances in which a Democrat introduced a bill modeled on ALEC legislation, the highest rate in the country. On two occasions, Rep. Peter Palumbo (D-Cranston) introduced a bill copycatting ALEC’s “No Sanctuary Cities for Illegal Immigrants Act,” which would allow police to check people for proof of legal U.S. residency.  Neither bill was reported from committee.  Also in the Rhode Island House, Rep. Scott Guthrie (D-Coventry) sponsored a bill limiting the amount of noneconomic damages that can be awarded to a plaintiff.  That bill closely resembled ALEC’s “Noneconomic Damages Awards Act.”

In New York, a Democratic Senator twice sponsored a bill modeled on ALEC’s “Special Needs Scholarship Program.”  This act would create a scholarship (voucher) program to allow students with special needs to attend the private or public schools of their parents’ choice.  A bill similar to the “Consistency in Firearms Regulation Act”, designed to preempt local firearms regulation, was introduced by a Democrat in the Missouri House.

Though Democratic legislators are sponsoring bills that are similar to ALEC policies, none of those legislators can be explicitly linked to ALEC.  Indeed, they may not have even been aware of the fact that the bills they sponsored looked like ALEC model policies.  Why, then, the striking resemblance?

Justice Brandeis once famously described the states as laboratories.  The states learn from each other – and ALEC learns from the states.  In fact, many ALEC bills are based on those that have already been introduced or adopted in state legislatures. “The Disclosure of Hydraulic Fracturing Fluid Composition Act” was first written and passed in Texas. “No Sanctuary Cities for Illegal Immigrants” passed in Arizona before it was taken as an ALEC policy.  The Castle Doctrine, made infamous by the Trayvon Martin case, was a bill in Florida before it was adopted (and later sunset) by ALEC.

ALEC, in a sense, simplifies the process by which legislators across the U.S. states learn from each other. Moreover, it gives corporate lobbyists a mechanism for efficiently reaching legislators who are most likely to sympathize with their agendas.

But without ALEC, legislators would still look to other states for ideas and bill language, and corporate lobbyists would still reach out to legislators who they thought would promote their interests. Would we see the same bills introduced and passed at the same rates were it not for ALEC?  Probably not.  But the fact that some of these bills are taken up by Democrats indicates how easily ideas can be transmitted across not only state borders, but also across party lines.  The dynamics of federalism ensure that the dissemination of ideas and policy occurs, regardless of whether lobbying groups exist to speed up the process.