Roughly 100,000 students a year earn a bachelor’s degree in education, a number that has been steady for decades. How do ed students spend their careers? Do they teach or do they follow an alternative career? At what point do they quit working entirely? And are times changing for the newest graduates?

No one tracks career paths of individual college graduates, of course. But we can get a good ballpark answer to these sorts of questions by looking at what sort of work individuals do today and then retrospectively asking when they earned a college degree. I’ve taken the 2014 American Community Survey,* which reports both work status and undergraduate major and computed an “imputed degree year” using as an approximation the assumption that the typical student receives her BA at age 22. I then look at folks who reported that their BA was in education. So we begin by asking, how many people who earned an education BA in the past were still working in 2014? 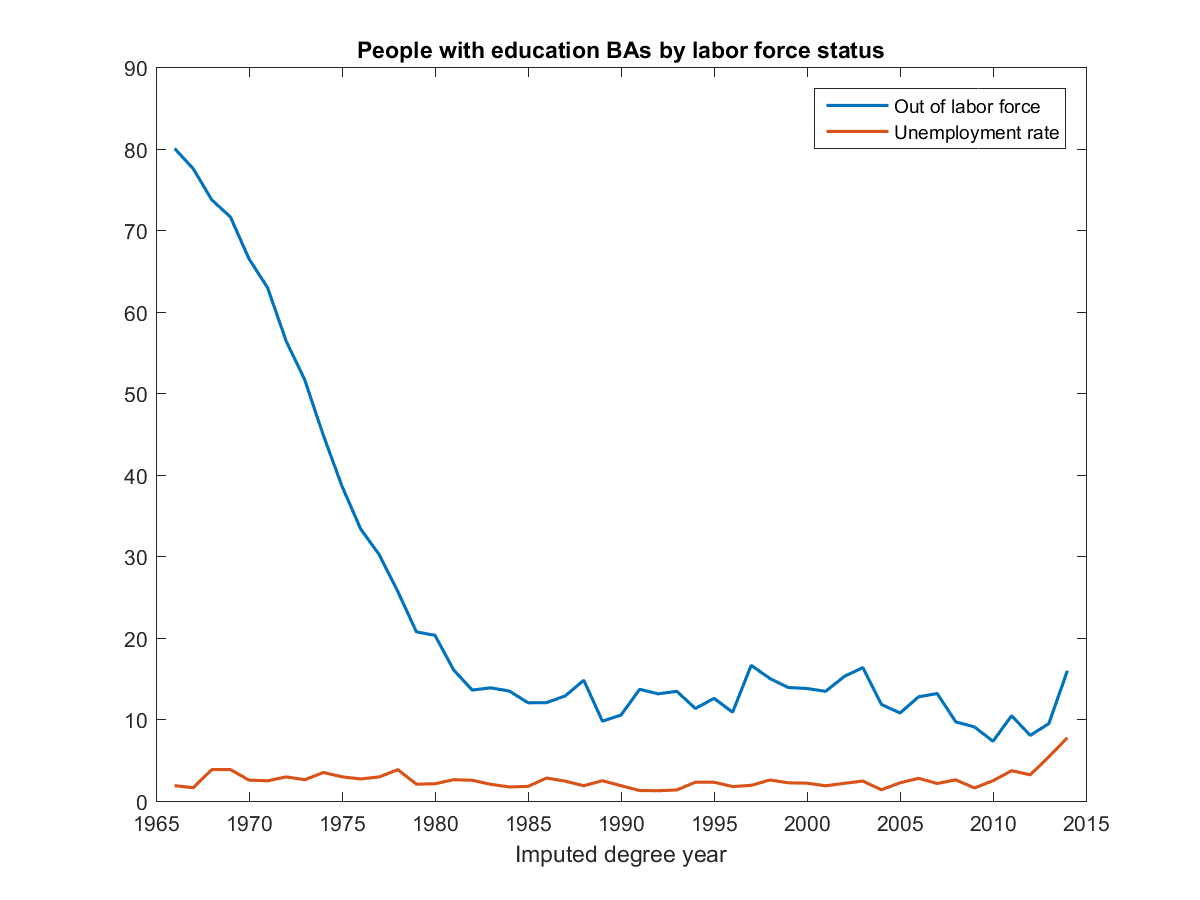 Unsurprisingly many of those who graduated college 40 years ago are no longer in the labor force, presumably having retired. Looking back more than 40 years, retirement rates rise rapidly. But for more recent graduates, only 10 to 15 percent are out of the labor force (and remember that “out of the labor force” includes taking a break from teaching to raise children). In other words, most folks with education BAs keep working until around retirement age.

What about unemployment, that is how many people are trying unsuccessfully to find work? The answer is “very few.” Unemployment rates for people with education BAs are generally between one and three percent.

“What about unemployment, that is how many people are trying unsuccessfully to find work? The answer is ‘very few.’ Unemployment rates for people with education BAs are generally between one and three percent.” 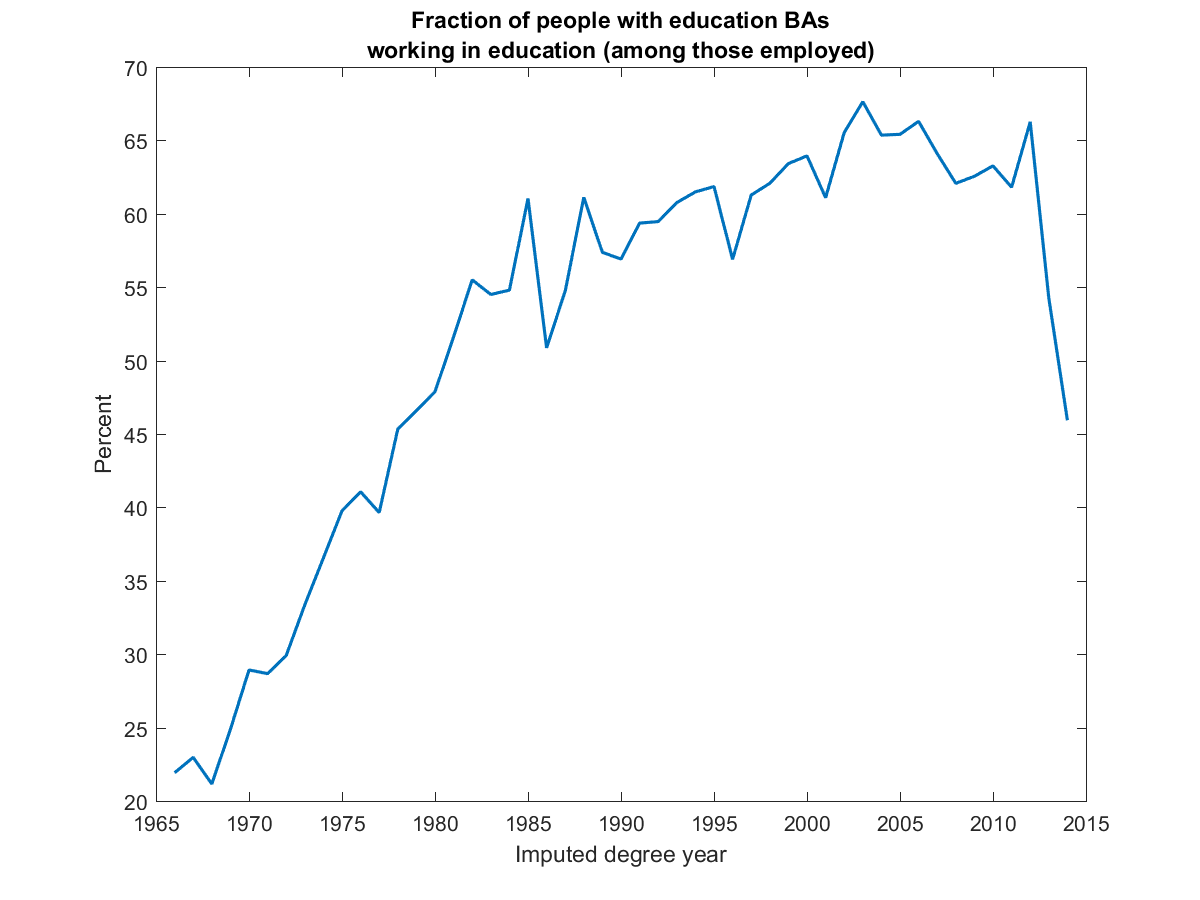 The first answer is that people who graduated decades ago are mostly not working in education. Presumably many are in second careers. Perhaps some are working to supplement teacher pensions.

The second answer is that for most cohorts, except the most recent, 55 to 65 percent of those employed are working in education. Are 55 to 65 percent numbers higher or lower than would seem desirable? The answer isn’t obvious. On the one hand, most college graduates don’t work exactly in the area of their major. Economics majors, for example, get good jobs, but few of those jobs are “economist.” On the other hand, an education degree is very much intended to be specific professional training. Some part of the effort that goes into training teachers is arguably wasted when graduates take non-education jobs.

The picture for the most recent graduates is more puzzling. Remembering that we are looking only at those who are employed, it’s surprising that the majority in the final year of the data are employed somewhere other than in education. Maybe some of this has to do with how the data was collected. (A respondent might have been interviewed after graduating while waiting for a teaching job that started in the fall, and may be temporarily employed in another industry.) However, the penultimate year’s data only had 54 percent of those employed, employed in education. It appears that there may be something of an increasing disconnect between training and employment in education.

It’s hard to know whether something odd is going on for those with recent education degrees, but I have a little bit of evidence that if something has changed, whatever it is isn’t unique to ed BAs. I’ve redrawn below the first figure with two changes. The new version adds in labor force status for BAs from non-education fields. And I’ve restricted the data to the last ten years to magnify the most recent evidence. 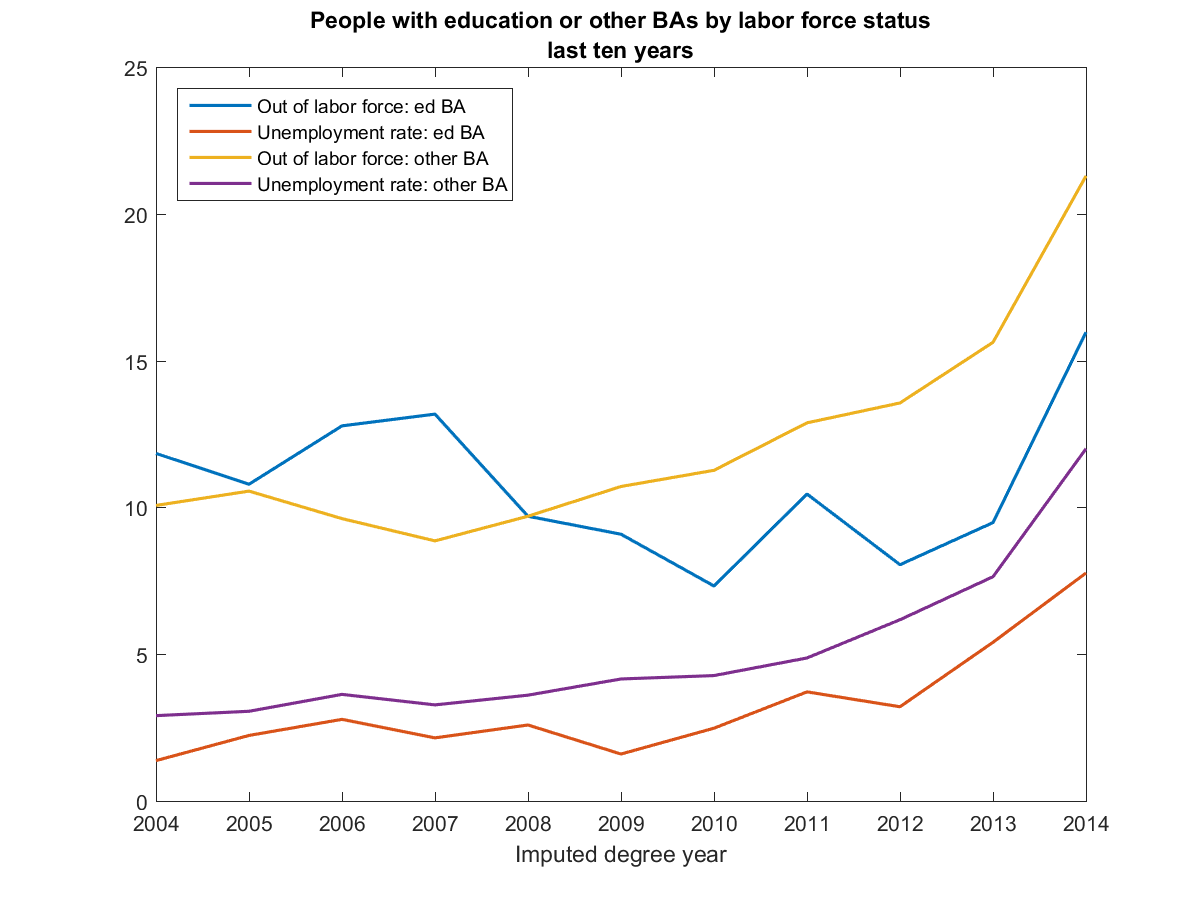 The figure shows that both out-of-the-labor-force and unemployment status for people with education BAs is noticeably higher for recent cohorts. However, the same increase shows up even more strongly for other BAs. So to the extent that recent BAs are not being quickly matched with jobs, the underlying cause does not seem to be special to the field of education.

Is employment for recent ed BAs different from the past? The unemployment rate for recent ed BAs is higher than the rate for those out five years or more. On the other hand, the same thing is true for recent grads in other fields. My guess—but it is just a guess—is that we are still seeing something of a roiled labor market in the aftermath of the Great Recession and that in the longer run careers of recent grads will look a lot like those of earlier cohorts.

Everyone knows that there is a great deal of turnover among teachers. Still, it appears that most education majors do end up in education, and what’s more, the majority of education majors do spend most of their career working in schools. The data here gives something of a different picture from the commonly held view of enormous attrition rates in teaching. (For related evidence, see this Washington Post story.) My suspicion is that the difference comes from how the data is collected. The charts here track education BAs, while many other studies track beginning teachers. Teachers move between schools and even between states. What’s more, teachers do drop out of teaching for childcare and other reasons and then return later. It’s likely that teachers who make such changes sometimes get lost in teacher-tracking data.