On November 9, 1989, the government of East Germany (the German Democratic Republic) announced that all of its citizens could visit West Germany and West Berlin. Crowds of Germans from east and west climbed onto the wall surrounding West Berlin and began chipping away at the concrete with hammers and other tools in a celebratory atmosphere. East German guards stood down. Thus began the end of the Cold War, including the deconstruction of the Berlin Wall over the coming years, the unification of Germany (in 1990), and the dissolution of the Soviet Union (in 1991).

Brookings experts contributed to this select reading list of books and articles that explore the issues and implications of this historic event and its emanations.

In her essay, “German Lessons: Thirty years after the end of history—elements of an education,” Constanze Stelzenmüller reflects on lessons from the historic moment and the 30 years since. 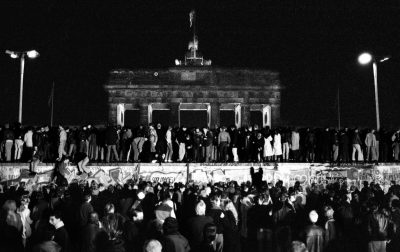 Stelzenmüller, a senior fellow in the Center on the U.S. and Europe at Brookings and the Henry Kissinger Chair at the Library of Congress, suggests a number of titles to inform readers about the meaning of this moment and beyond. These include:

Angela Stent, a nonresident senior fellow at Brookings and director of the Center for Eurasian, Russian, and East European Studies at Georgetown University, is the author of Russia and Germany Reborn: Unification, the Soviet Collapse, and the New Europe, in which she examined the evolution of the relationship between Russia and Germany in the context of German reunification, the collapse of the Soviet Union, and the emergence of a new European Order. Stent “deftly takes the reader through the complex events that led to the German reunification. It was never as inevitable as it seemed in retrospect,” wrote one reviewer.

Pavel Baev, a nonresident senior fellow at Brookings and research professor at the Peace Research Institute Oslo (PRIO), recommends a volume he co-edited with colleagues titled, Geopolitics of Post-Wall Europe. “The fall of the Berlin Wall symbolized a dramatic turning point in the history of European politics and security,” PRIO noted. “Geopolitics in Post-Wall Europe highlights the new relations between politics, culture and territory. It analyzes the major geopolitical shifts in the connection between security and identity.”

Senior Fellow Michael O’Hanlon, director of research in the Foreign Policy program and holder of the Sydney Stein, Jr. Chair, highlights volumes that examine the broader geopolitical issues of the late Cold War and rise of new global actors. Former Brookings expert Cliff Gaddy’s The Price of the Past: Russia’s Struggle with the Legacy of a Militarized Economy explored how the USSR’s military spending imposed costs and burdens on the Russia that emerged from the Cold War. Gaddy also co-authored with Fiona Hill, a Brookings senior fellow on leave who recently served on the National Security Council in the White House, Mr. Putin: Operative in the Kremlin, which O’Hanlon called a “timeless classic” about the rise of, and many dimensions of, Vladimir Putin.

O’Hanlon also calls attention to some classic works in Cold War studies, to include:

James Goldgeier, the Robert Bosch Senior Visiting Fellow at Brookings and a professor of international relations at American University, recommends his work with Derek Chollet of the German Marshall Fund on the period between the fall of the Berlin Wall and the 9/11 attacks that, as he puts it, “shows the impact of the fall of the Wall on the politics of foreign policy in the United States and how that continues to shape our world today.” In America Between the Wars, Goldgeier and Chollet write that “Just as history did not end on 11/9, it did not begin on 9/11,” and that:

the challenges confronting America—combating extremist forces determined to spread terror, responding to the violent breakdown of states, stemming the proliferation of weapons of mass destruction, managing the economy in an era of dramatic technological revolution, and choosing when to send young American soldiers, sailors, air-men, and marines to fight—did not start on 9/11. They began when the Cold War ended a decade earlier.

Finally, Kemal Kirişci, the TÜSİAD Senior Fellow in the Center on the U.S. and Europe and director of the Turkey Project at Brookings, recommends a book on the fall of another wall in 1989. In Border: A Journey to the Edge of Europe, Kapka Kassabova explores Bulgaria’s former militarized border with Greece and Turkey, which once was thought to be an easier way to cross into the West than the Berlin Wall. It’s publisher describes Border as “a scintillating, immersive travel narrative that is also a shadow history of the Cold War, a sideways look at the migration crisis troubling Europe, and a deep, witchy descent into interior and exterior geographies.” A similar title Kirişci recommends (for francophones) is Alexandre Lévy’s, Carnets de la Strandja : 1989-2019 d’un mur l’autre.

Germany has a special responsibility to stop Putin’s evil