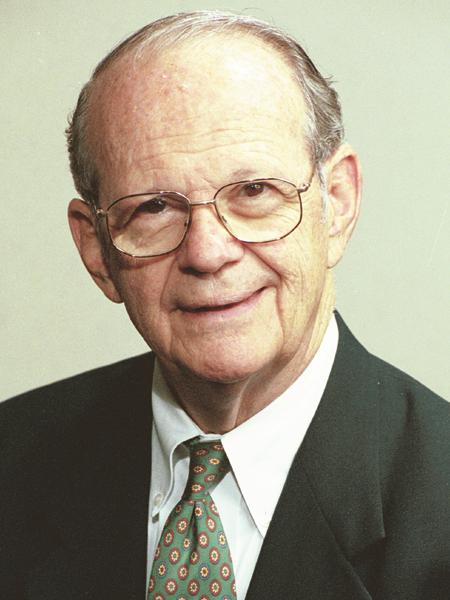 Today the Brookings community learned with deep regret about the death of one of its members, Bill Frenzel, guest scholar in Economic Studies and a former U.S. representative from Minnesota (1971-1991).

During his 23 years with Brookings, first in the Governance Studies and then in the Economic Studies programs, Mr. Frenzel contributed his insights and expertise on a variety of policy issues, most with a focus on U.S. fiscal policy, the federal budget, the deficit, and other important matters before the U.S. Congress. Some highlights of his work include:

As a Republican member of the House from Minnesota, Frenzel introduced a Constitutional amendment for term limits just after he was sworn in to his first term in January 1971. Testifying to Congress as a Brookings guest scholar in 1997, Frenzel said that, “For me, the clincher has always been that without term limits, the Congress is immortal.” A member of Congress, he argued, “who can’t be defeated is not accountable.”

In February 2002, Frenzel and then-fellow Sarah Binder (now a senior fellow), examined how the 107th Congress responded to the 9/11 terrorist attacks in the days immediately following and thereafter, and also offered their expectations for legislating in 2002. Frenzel wrote:

When I was a congressman, there was nothing that commanded the level of attention that September 11 did. I started my congressional career when Vietnam was winding down, and the other significant crises that took place while I was in office—the hostages in Iran, the run-up to the Gulf War—paled in comparison to what we saw this fall. In fact, as Sarah said, only Pearl Harbor was comparable in terms of the level and impact of devastation.

In 2006, writing about the need for comity in Congress, he said that “the well has been poisoned,” and that the “lessons taught by Foley and Michel, and Mitchell, Baker and Dole have been forgotten or rejected.” Because, as he argued, the public likes political fighting, and because control of Congress is always very close, “the entire burden of restoring comity in the short run falls on members of Congress themselves.”

WATCH: Minnesota Rep. Erik Paulsen, who said that Frenzel “represented the absolute best in public service” and who now represents the same congressional district that Frenzel did (Minnesota’s 3rd), led a special order on the House floor remembering Bill Frenzel:

In the lead-up to the 2008 presidential nominating contests, Frenzel and colleagues published a set of recommendations for the next president on addressing the deficit. Specifically, they wrote:

Presidential candidates should commit to restoring fiscal balance over the next five years and to constructing a sustainable fiscal course over the long term by reforming entitlements and taxes as soon as possible. They should emphasize to the public that the deficit matters and pledge to work in a bipartisan way to tame it; they should agree to putting all options on the table, provide an outline of the reforms needed on both the tax and spending sides of the ledger, and be candid with the American people about the magnitude of the problem. Candidates also may want to propose reforms to the budget process, but these alone will not restore fiscal balance.

In July 2013, at a time when both the House and the Senate were pursuing their own visions of immigration reform, Frenzel knocked down some of the key arguments reform opponents were then making, from border security concerns to charges that education, welfare and medical costs incurred by immigrants would be unaffordable. On the 11 million undocumented aliens in the U.S. already, he wrote:

Opponents correctly insist that the 11 million undocumented aliens in the US have broken the law. Therefore they should not be given an automatic path to citizenship. There is nothing wrong with that reasoning except that those people are here. Absent family catastrophes, we can’t even find them. Probably most of them are going to stay here one way or another. We need to find some way to integrate them into our society some day.

In the end, the best reason for something like the Senate bill may be that those undocumented persons are pretty much like us. They came here for some of the same reasons our forebears came. They and their families were poor and hungry. They broke the law because they thought they had no alternative.

“For the Congress, and especially the Republicans,” he wrote, “the question may ultimately be what kind of a country we want.”

Just over a year ago, in October 2013, Frenzel reflected on the brinksmanship between the two parties in Washington over the federal budget that caused a temporary and partial shutdown of the U.S. federal government. “We have been watching this long-running soap opera since well before Republicans regained their majority in the House in 2010,” he wrote, apportioning measures of blame to both sides. He offered some solutions, including modification of the sequester cuts and establishing a targeted debt-to-GDP ratio of 60 percent in 10 years. “Congress is not very good at keeping its promises,” Frenzel wrote, “but a 10-year target would be worth trying.”

Of the many issues to which Bill Frenzel contributed his expertise and insight, perhaps free trade was among the most important to him. In 2001, Frenzel received the Order of the Rising Sun, one of Japan’s highest civilian honors, for “his contribution to the betterment of Japan-U.S. trade relations and the enhancement of American understanding of Japan.” In January 2014, Frenzel was honored with a Champion of Free Trade Award given at an event to celebrate the 20th anniversary of NAFTA. And in October 2014, the Ambassador of Mexico to the United States, Eduardo Medina Mora, honored Frenzel with the Mexican Order of the Aztec Eagle, the nation’s highest award conferred on foreigners, for his work on the NAFTA bill while he served in Congress.

In 2013, Frenzel called the Trans-Pacific Partnership and the Transatlantic Trade & Investment Partnership “the needed substitute for the moribund WTO Doha Development Round” that could “spark a growth spurt in world trade.”

WATCH: Rep. Paulsen spoke on the House floor Tuesday in tribute and asked for a moment of silence.

The Minneapolis Star-Tribune called Frenzel “a standout in a group that was loaded with ambition and talent,” referring to his generation of peers in the state legislature to which he was elected in 1962.

According to the New York Times, former Republican Rep. Vin Weber of Minnesota said, “It’s hard to think of anybody that is a better example of why Congress used to work than Bill Frenzel.”