“Our analysis of more than two decades of data on the financial well-being of American households suggests that the reality of student loans may not be as dire as many commentators fear,” write Beth Akers and Matt Chingos in their new paper, released in June, exploring the causes of, consequences of, and solutions for rising student loan debt burdens.

In May, scholars from Economic Studies at Brookings and the Urban-Brookings Tax Policy Center (TPC) observed that “borrowing to finance higher education has increased markedly over the past two decades. These trends are associated with a variety of negative economic outcomes for households who hold the debt, but those outcomes must be weighed against the net increase in earnings the households receive from acquiring more education.”

The two papers and additional research demonstrate a more complex, but less dire, situation than commonly portrayed in the media. Here are some facts about student loans that inform discussion of the issue and the policy options (with notations to their source materials, below).

The Volume and Share of Student Loans Is Growing

The Distribution of Debt by Volume and Household Type Varies 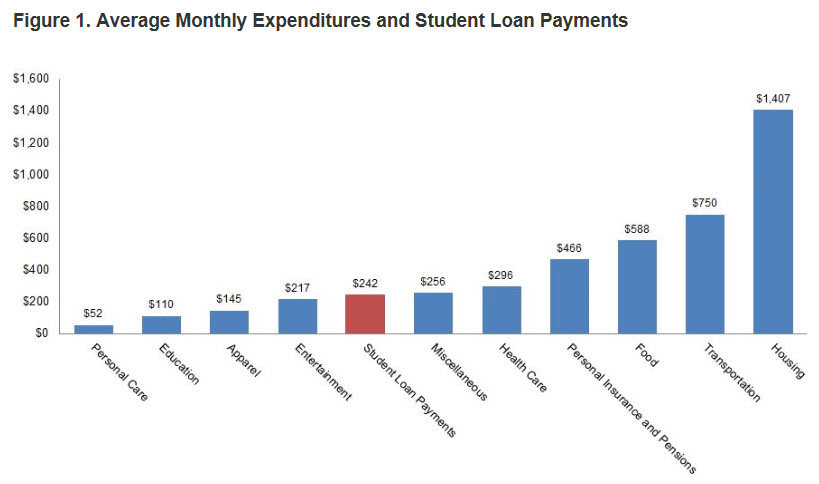 A Variety of Reasons Why Student Loan Debt Has Increased

Akers and Chingos note that “The growth in student loan debt is often discussed as a problem in and of itself. However, to the extent that borrowers are using debt as a tool to finance investments in human capital that pay off through higher wages in the future, increases in debt may simply be a benign symptom of increasing expenditure on higher education.”

The TPC  paper authors emphasize that: “Student loan debt represents debt undertaken to finance an investment in human capital. Simply comparing the financial and economic circumstances of households with and without student debt can be misleading if it does not also account for the additional earnings capacity produced by the education that was financed by that debt.”

“We need to rethink the proposition that more student loan debt leads to greater financial hardship,” Akers wrote in a separate post. “The answer to the systemic problems in student lending is not to discourage borrowing. Rather, we should focus on propagating the idea that loans are a valuable tool for raising future earnings when they are used appropriately.”

“Is a Student Loan Crisis on the Horizon?” by Beth Akers and Matthew M. Chingos

“The Typical Household with Student Loan Debt,” by Beth Akers

“Moving on to the Real Issues in Student Lending,” by Beth Akers

America’s young people need jobs. The federal government should pay for them.

"The pandemic has highlighted just how intricately related lack of broadband access is to systemic inequality."