Last spring, the Federal Reserve Bank of New York (FRBNY) released new evidence on the relationship between student loan debt and home ownership.  It found that during the financial crisis, young people with student loan debt had become less likely than those without debt to take on mortgage debt (a proxy for home ownership) by the time they reached age 30.  It was suggested that this reversed the long-run trend in which individuals with student loan debt, who tended to be wealthier and more educated than their debtless peers, were more likely to own a home.  Although this analysis provided useful information about student loan debt, it is subject to a number of limitations.

In this post, I expand on that analysis and overcome some of those limitations by using a data set that is better suited to answer the question at hand.[i] The Survey of Consumer Finances (SCF), which is administered by the Federal Reserve Board, captures household debt portfolios as well as information on demographics and earnings.  Although the SCF collects data only every three years, having begun in 1989, it spans a longer period of time than the FRBNY study, which only includes data beginning in 2003., This longer time frame is helpful in exploring long-term trends.

Another limitation of the FRBNY analysis is the inability to control for temporal changes in other factors that are related to homeownership.  The growing utilization of student loan debt means that the characteristics of borrowers and non-borrowers are changing over time—many borrowers who wouldn’t have had debt if observed in earlier years will have debt if observed in more recent years.  One way to approach this challenge is to use regression to control for differences in observable characteristics between households with and without student debt.  The dashed line in the figure below illustrates the estimated level of homeownership for households with student loan debt holding constant education, income, age, and race.  This analysis confirms the previous finding that homeownership rates among households with student loan debt have been lower than home ownership rates among households without debt for the better part of the last 20 years. 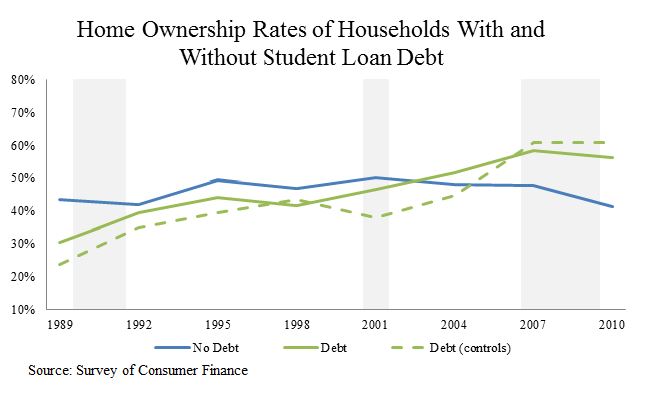 Although it can be tempting to draw conclusions about causal relationships from these correlational data, neither this analysis nor the one published by the FRBNY can really tell us much about how student loan debt affects homeownership.[iii] Borrowers and non-borrowers likely differ in ways that are hard to observe, and the growing use of debt to finance higher education over the last two decades further complicates the analysis.  Additionally, it is not clear what the policy-relevant counterfactual to borrowing should be: lower college prices, more time spent working while in college, forgiveness of debt after graduation, or something else?

Despite these cautions, many have cited the FRBNY analysis as part of a narrative about student loan debt discouraging homeownership among young adults.[iv] It’s dangerous to promote this narrative without conclusive evidence, as negative attitudes toward debt have the potential to encourage debt aversion which can prevent students from enrolling in college in the first place.

It is useful to step back for a moment and ask: If student loan debt is in fact preventing borrowers from purchasing homes, what should policymakers do about it?  One clear solution is to lessen the financial burden of repayment through extended repayment periods, or income-based repayment programs. Fortunately, such programs already exist, although they could certainly be better designed.  Another potential solution is to make these programs the default option for borrowers, so that instead of damaging their credit scores—and prospects for home ownership—by defaulting on their student loans, they are automatically entered enter into a program of affordable monthly payments based on their income.[v]

[i] The evidence reported by the New York Federal Reserve FRBNY was compiled using the Consumer Credit/ Equifax panel, which provides longitudinal data on the debts held by US consumers from 1999 through the present.

[iii] A recent working paper seeks to identify this relationship.