Brookings recently hosted an event on the future of the U.S. space program featuring several panels of experts to discuss a variety of topics. But this isn’t the first time Brookings has focused on space policy, both recently and over 50 years ago.

Brookings scholars have conducted research on space policy in the recent past, including “Launch! Taking Colorado’s Space Economy to the Next Level,” a report by the Metropolitan Policy Program; and Michael O’Hanlon’s 2004 book Neither Star Wars nor Sanctuary: Constraining the Military Uses of Space.

In December of 1960—three years following the Soviet Union’s launch of Sputnik and just months prior to Yuri Gagarin’s and then Alan Shepard’s flights into orbit—a team of Brookings researchers led by Donald N. Michael (1923-2000), issued a report to NASA’s Committee on Long-Range Studies titled “Proposed Studies on the Implications of Peaceful Space Activities for Human Affairs.” 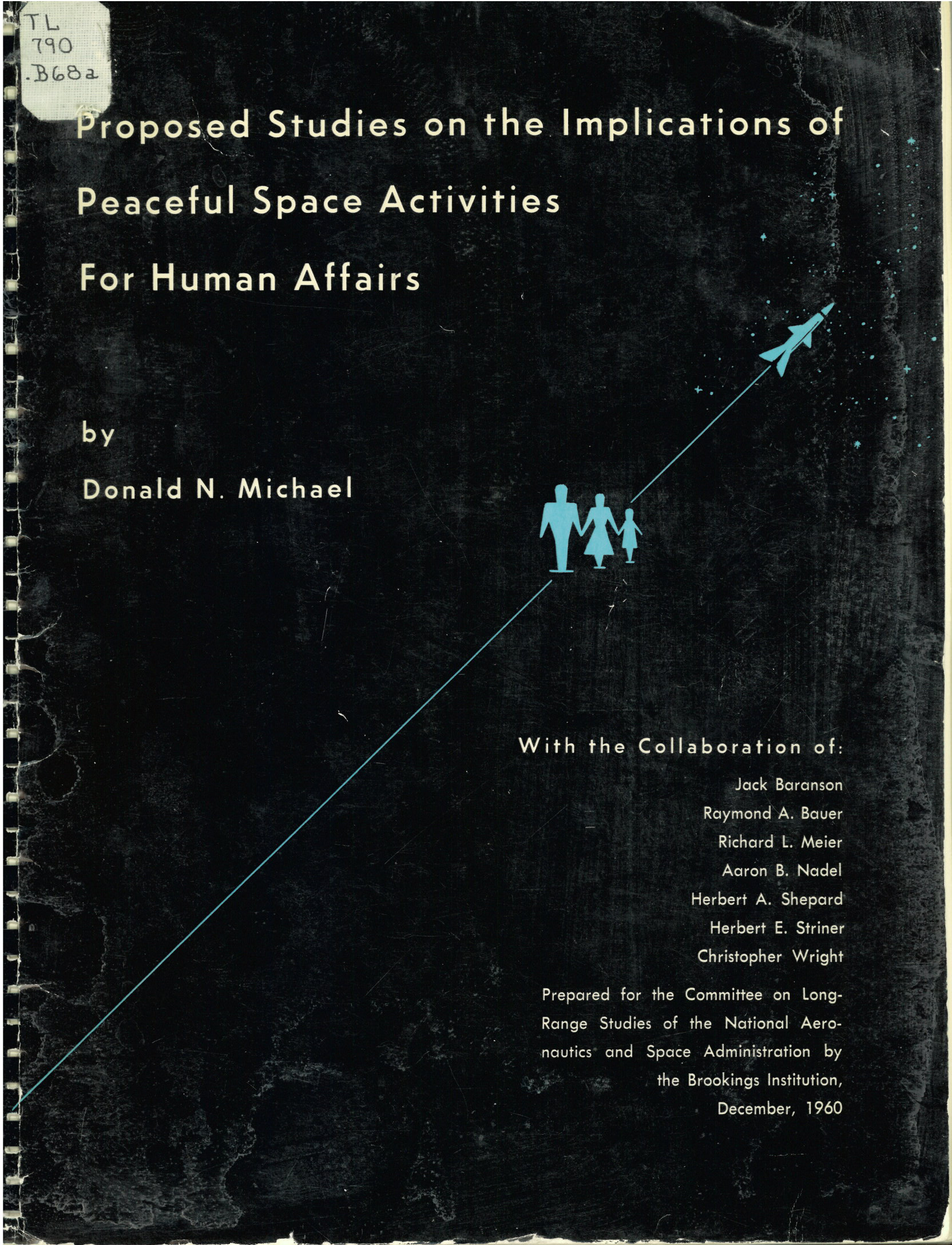 In his transmittal letter of the report to NASA, Brookings President Robert Calkins wrote that “NASA … and the Brookings Institution agreed that there was a wide range of studies in the social sciences that could be made of the potential benefits and problems arising from the peaceful use of space.” Calkins added that “the report recommends for the consideration of NASA a wide range of studies regarding the social, economic, political, legal, and international implications of the use of space for peaceful and scientific purposes.”

The table of contents below (click to enlarge) shows attention in the 186-page (Brookings Library version, before the appendices) report to a wide-range of policy issues, including communications systems, “weather predicting system,” space industries, and implications for foreign policy.

With regard to “satellite-based communications,” the report noted that “Because of the high costs and the heavy-rocket technology intimately associated with satellites, government support and control is necessary. Yet because the field of telecommunications in the United States has been traditionally the domain of private enterprise, the government’s role is especially complex.”

The report also considered the possibilities of “technological by-products,” such as telemetry, stress research, compact power sources, new fabricating materials, and propulsion. “Inherent in any technological development of course,” noted the report:

is the potential for unexpected and important effects on society, since no technology or object of technology operates by itself in generating its effects. In many cases, utilization of the technology is almost totally dependent on other non-technological factors in the society.

In the final section, “Attitudes and Values,” the report examined a variety of issues related to people, society and culture across many communities. For example, the report recommended studying “the values and attitudes of the first group of [U.S.] astronauts over time as they move through and beyond the Mercury program” because it would “also be of use to future astronaut programs.”

Noting a range of reactions to space activities among scientists, from “delighted” to “indifferent” to “hostile,” the report argues that “Future space activities will be partly dependent on scientists in universities and other institutions for ideas … for the kind of supporting approval that will encourage competent men to contribute to the space effort.”

In this section, the report covered business executives (“the impact of recent technological advances appears to have made executives extremely reluctant to conclude that anything is impossible”); children (“their childhood impressions of space and its implications may have strong effects on their career choices and adult attitudes toward space activities”); and the general public (“How important are expectations of imminent and glamorous space activities to public support of the effort and the allocation of funds and resources to it?”).

The penultimate section of the long report, about two pages, was about “the implications of a discovery of extraterrestrial life.” The authors recognized the unlikelihood of “face-to-face” meetings within the next twenty years, they nevertheless looked ahead to the chance that “artifacts left at some point in time by these life forms might possibly be discovered through our space activities on the Moon, Mars, or Venus.”

A discovery of extraterrestrial life, most likely through radio contact the authors believed, “would certainly be front-page news everywhere” and “might lead to a greater unity of men on earth, based on the ‘oneness’ of man …” or, due to the tremendous time lag in communications, “the fact that such beings existed might become simply one of the facts of life but probably not one calling for action.” The report recommended continuing studies “to determine emotional and intellectual understanding and attitudes” regarding the possibility of intelligent extraterrestrial life” and studies to understand “the behavior of peoples and their leaders when confronted with dramatic and unfamiliar events or social pressures.” The latter aimed to determine how such information might be shared, or withheld, from the public.

Read this section of the report here (PDF).

The report’s final section covered “Implications of man in space” and focused on the Mercury space program, which had started in 1959. The report noted the favorable and unfavorable attitudes prevailing about the program. Some worried about the “‘stunt’ characteristics of the program and about its apparent tendency to emphasize the glamorous astronauts rather than the scientific and engineering aspects and problems of the project.”

The report called attention to the status of the astronauts as military men, who despite having “normal” families were able to take risks that “large portions of the general public might not otherwise consider appropriate for family men.”

“If the Mercury program is successful,” argued the report:

it will only be a prelude to attempts to put man on the moon and some of the planets. Thus the implications of astronautic efforts, subsequent to Mercury, for attitudes and values should also be studied. Social observers have speculated that manned flight to the moon or Mars might restimulate the American frontier spirit, thereby supplying a new form of vicarious living for a large part of the public and perhaps inspiring some to participate in more challenging activities here on earth.

The U.S. House Committee on Science and Astronautics (87th Congress) reprinted the report in a committee print, available here.

Matt Kasman and Ross A. Hammond
Wednesday, February 1, 2023
Get daily updates from Brookings