Two Brookings scholars, in two new books, explore questions about democracy in the Arab World in the context of the Arab Spring uprisings.

In Understanding Tahrir Square and Prospects for Arab Democracy (Brookings Institution Press, 2014), Stephen Grand examines the Arab Spring uprisings in the historical context of previous waves of democratization across the globe.

In Temptations of Power: Islamists and Illiberal Democracy in a New Middle East (Oxford University Press, 2014), Shadi Hamid relates his conclusions about how and why Islamist movements change over time, based on hundreds of hours of interviews and conversations he conducted with Islamists and Salafis in Egypt, Jordan and Tunisia before, during and after the Arab Spring uprisings. 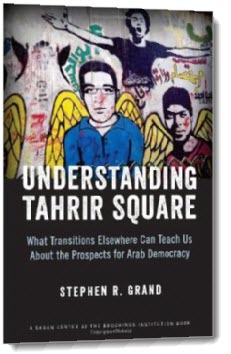 Grand, a nonresident senior fellow at Brookings and former director of the project on U.S. Relations with the Islamic World, presents in his book:

an optimistic assessment of the long-term prospects for the democratization of Arab countries showing that the trials and tribulations of the Arab Spring are neither entirely new nor unique. They are instead part and parcel of the struggles often faced by countries in transition to democracy.

Despite continued political turmoil in places like Egypt, Grand maintains that it is too early to declare the Arab Spring a failure. “How could the Egyptian people stage three popular revolts in the span of less than three years,” he asks, “against long-time strongman Hosni Mubarak, the interim military government, and Morsi’s Muslim Brotherhood–dominated government—yet still end up well short of democracy?”

Throughout the region, the last three years have seen a remarkable outpouring of popular protest yet far fewer constructive steps to build successful new democracies. This book attempts to explain that puzzle and propose a way forward by examining recent experiences with democratization in other regions of the world: in the former Eastern bloc; the Muslim-majority countries of Asia; Latin America; and Sub-Saharan Africa. The Arab world was not the first region of the world to embark on a transition to democracy but the last. Before the Arab Spring, some ninety countries across the globe had embarked on transitions to democracy since the mid-1970s. What the experiences of those regions suggest is that much of the pessimism about the Arab Spring is unwarranted. Democracy takes time to take root, even under the best of circumstances. How the events of the Arab Spring play out—whether they lead to a more stable, prosperous, and democratic Middle East or something more sinister and tragic—is a story that is still unfolding.

Grand will participate in a public event on Wednesday, April 23, hosted by the Islamic World project, to discuss his book. 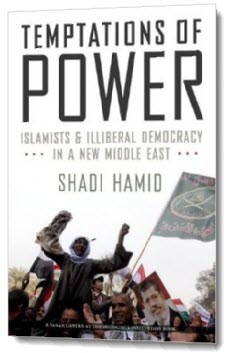 Hamid, a fellow with the Saban Center for Middle East Policy at Brookings, reviews the events that led to the overthrow of Egyptian dictator Hosni Mubarak in early 2011 (only to be replaced by a military junta), the election of Islamic Brotherhood leader Mohamed Morsi to the presidency in August 2012, and his overthrow by a popularly-supported military coup in July 2013. Hamid writes that:

In those heady months of 2011 and 2012, the prospect of power was all too tempting. And it was a temptation that the [Muslim] Brotherhood leaders provided unable to resist, despite insisting that they knew better.

Hamid looks at two “distinct phases” in this Islamist narrative: “one defined by the experience of repression and the other by the democratic openings made possible by the Arab revolutions.”

The care and caution that had characterized Islamist groups for decades was pushed to the side in the wake of the uprisings of 2011. There was little time for preparation. With striking speed, they widened their ambitions. There was a time when Islamists used to lose elections on purpose. Now they seemed intent on making the most of a moment they feared would pass them by. In power, in both Egypt and Tunisia, they struggled to reconcile vague, overarching ideas with the more mundane demands of everyday politics and governance.

In his Wall Street Journal review of Temptations of Power, James Traub writes that Hamid’s subject is, “at bottom,”

whether the Arab world can have democracy and whether its form of democracy could be compatible with liberalism. This is the great, as-yet-unanswered question of the upheaval once hopefully known as the Arab Spring. Mr. Hamid observes that while the illiberal democrats of, say, Uganda or Nicaragua are simply power-hungry, Islamists are illiberal by ideological design. Even the most moderate among them, Rachid Ghannouchi, the founder of Tunisia’s Nahda party, has written, according to Mr. Hamid, that Islamic governance “is the dividing line between faith and disbelief.”


I don’t think this is where Mr. Hamid, who urged U.S. policy makers to work with the Brotherhood government, wanted to come out. But he is to be commended for delivering complicated news to no one’s liking—not the Brothers, not their modestly hopeful fans in the West, and not their fire-breathing enemies either.

Read an excerpt by Hamid of his book on foreignpolicy.com.

Visit the Saban Center for Middle East Policy and the Project on U.S. Relations with the Islamic World for more research and commentary on these issues.