For the weekend, read the latest from Brookings about the conflict in Egypt; information about undocumented immigrants who were children when they arrived in the U.S.; how U.S. intervention in Syria may not tip the strategic balance; how to pay for a national infrastructure bank; and an expert’s thoughts on maritime security in East Asia.

First, stay up to date on the latest Brookings scholar analysis and commentary on the events unfolding in Egypt. Looking back to last fall, just after then-President Mohamed Morsi pushed through controversial, albeit temporary, powers, Shadi Hamid explored the division between Islamists and non-Islamists, and discovered an abundance of ironies that are applicable today. “… the Brotherhood sees its opponents,” he wrote,

— whether liberals, the judiciary, elements of the military and state bureaucracy — as fundamentally anti-democratic. Among other things, it points to the failure of someone as prominent as Mohamed ElBaradei — a “liberal dictator” in the words of one Brotherhood official — to stand up against the judiciary’s dissolution of parliament, and blasts his recent warnings that the military may need to intervene “to restore law and order.”

“The irony of non-Islamists’ antipathy toward the Muslim Brotherhood,” Hamid continued,

is that the current version of the organization happens to be the moderate, reconstructed version. For all its considerable faults, the Brotherhood of today is not the Brotherhood of the early 1980s, when calls for tatbiq al-sharia (“application of Islamic law”) were its core demand.

Audrey Singer and Nicole Prchal Svajlenka examined over 460,000 DACA applications to find out. Their findings, presented in a report with data and information graphics, include the following: 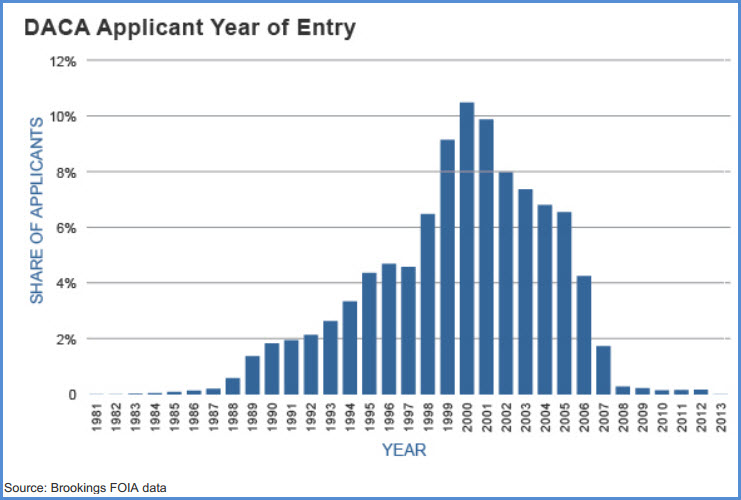 Read their report, get the data and interact with maps and info-graphics.

Ken Pollack provides an in-depth look at the forces arrayed against each other in Syria, a must-read in the midst of a debate about whether the U.S. should intervene in the conflict, and the possible costs. Pollack looks at both the strengths and weaknesses of the regime and the opposition, and presents options for U.S. interventions. He concludes that of these options, “none has a high-likelihood of producing an opposition victory independently, and those with the best chance to tip the balance toward the opposition entail the greatest costs and commitments by the United States.”

That conclusion is not meant as an argument against (or for) U.S. intervention in the Syrian civil war. It is merely an acknowledgement that the options that have the lowest cost—and therefore seem to be Washington’s preferences—are likely to have little impact on the military balance, and so probably won’t contribute much to accomplishing American goals.

Read, “The Military Dynamics of the Syrian Civil War and Options for Limited U.S. Intervention.”

Paying for a National Infrastructure Bank

Scholars in the Metropolitan Policy Program have frequently written about the benefits of a National Infrastructure Bank. In this new report, Robert Puentes, Joseph Kane, and Patrick Sabol explain how to capitalize the initial loan fund: through a one-time repatriation tax holiday. They put the issue into the context of America’s coming infrastructure needs:

The McKinsey Global Institute estimates that the United States needs to spend an additional $150 billion a year through 2020 to meet America’s infrastructure needs. This investment is expected to add nearly 1.5 percent to annual GDP and create at least 1.5 million jobs. Despite the key role infrastructure plays in the economy and the high expected return on investment, the federal government is currently unprepared to meet this funding goal.

They argue that a repatriation tax holiday is an “effective, simple, and relatively low-cost way to fund this economically important institution.” Read their paper, “Invest But Reform: Establish a National Infrastructure Bank Capitalized by a Repatriation Tax Holiday.”

An American Perspective on Maritime Asia

In September 2010, a Chinese fishing trawler rammed Japanese Coast Guard vessels near a group of islands in the East China Sea, ownership of which is fiercely disputed between the two nations. In a prescient coincidence of timing, a month later, Richard Bush, director of the Center for Northeast Asian Policy Studies at Brookings, published The Perils of Proximity: China-Japan Security Relations.

Earlier this month, Bush delivered the keynote speech at the 2013 East China Sea Peace Forum in Taiwan in which he explored such complex maritime disputes and suggested a path forward in resolving them.

Read Bush’s speech, his “memorandum to the president” on maritime security in the Eastern seas, and his policy brief on China-Japan Security Relations.

As always, please visit our home page for the latest research, commentary and activities from the scholars of the Brookings Institution.