In a few weeks, the International Monetary Fund and other international groups, such as the G20, will meet in Washington. When I attended such international meetings as Fed chairman, delegates discussed at length the issue of “global imbalances”—the fact that some countries had large trade surpluses (exports much greater than imports) and others (the United States in particular) had large trade deficits. (My recent post discusses the implications of global imbalances from a savings and investment perspective.) China, which kept its exchange rate undervalued to promote exports, came in for particular criticism for its large and persistent trade surpluses.

However, in recent years China has been working to reduce its dependence on exports and its trade surplus has declined accordingly. The distinction of having the largest trade surplus, both in absolute terms and relative to GDP, is shifting to Germany. In 2014, Germany’s trade surplus was about $250 billion (in dollar terms), or almost 7 percent of the country’s GDP. That continues an upward trend that’s been going on at least since 2000 (see below). 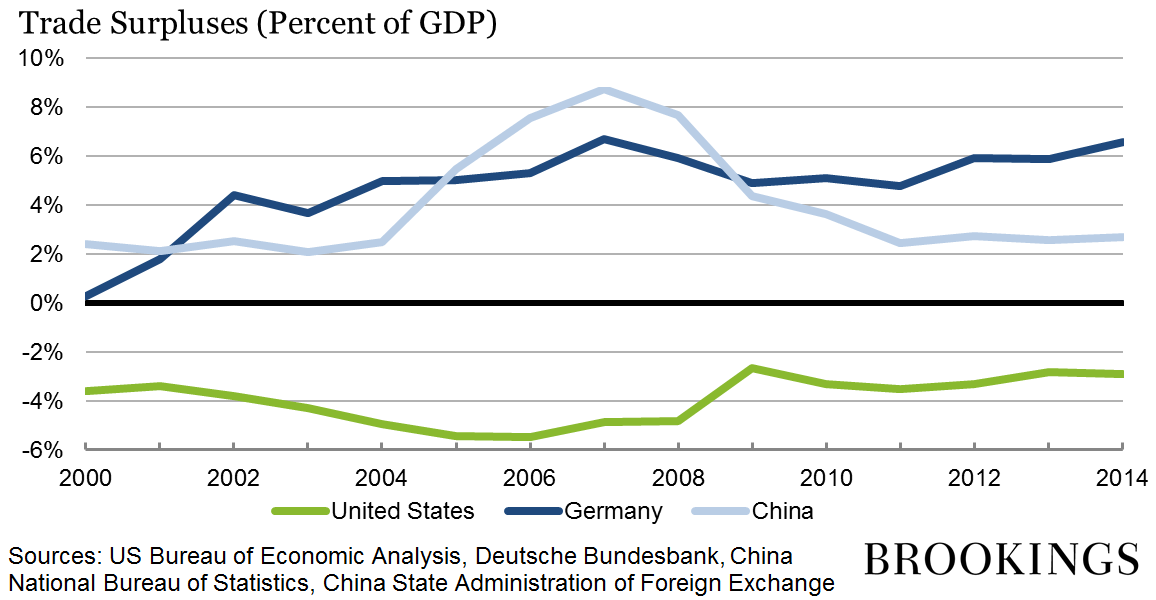 First, although the euro—the currency that Germany shares with 18 other countries—may (or may not) be at the right level for all 19 euro-zone countries as a group, it is too weak (given German wages and production costs) to be consistent with balanced German trade. In July 2014, the IMF estimated that Germany’s inflation-adjusted exchange rate was undervalued by 5-15 percent (see IMF, p. 20). Since then, the euro has fallen by an additional 20 percent relative to the dollar. The comparatively weak euro is an underappreciated benefit to Germany of its participation in the currency union. If Germany were still using the deutschemark, presumably the DM would be much stronger than the euro is today, reducing the cost advantage of German exports substantially.

Second, the German trade surplus is further increased by policies (tight fiscal policies, for example) that suppress the country’s domestic spending, including spending on imports.

In a slow-growing world that is short aggregate demand, Germany’s trade surplus is a problem. Several other members of the euro zone are in deep recession, with high unemployment and with no “fiscal space” (meaning that their fiscal situations don’t allow them to raise spending or cut taxes as a way of stimulating domestic demand). Despite signs of recovery in the United States, growth is also generally slow outside the euro zone. The fact that Germany is selling so much more than it is buying redirects demand from its neighbors (as well as from other countries around the world), reducing output and employment outside Germany at a time at which monetary policy in many countries is reaching its limits.

Persistent imbalances within the euro zone are also unhealthy, as they lead to financial imbalances as well as to unbalanced growth. Ideally, declines in wages in other euro-zone countries, relative to German wages, would reduce relative production costs and increase competitiveness. And progress has been made on that front. But with euro-zone inflation well under the European Central Bank’s target of “below but close to 2 percent,” achieving the necessary reduction in relative costs would probably require sustained deflation in nominal wages outside Germany—likely a long and painful process involving extended high unemployment.

Systems of fixed exchange rates, like the euro union or the gold standard, have historically suffered from the fact that countries with balance of payments deficits come under severe pressure to adjust, while countries with surpluses face no corresponding pressure. The gold standard of the 1920s was brought down by the failure of surplus countries to participate equally in the adjustment process. As the IMF also recommended in its July 2014 report, Germany could help shorten the period of adjustment in the euro zone and support economic recovery by taking steps to reduce its trade surplus, even as other euro-area countries continue to reduce their deficits.

Germany has little control over the value of the common currency, but it has several policy tools at its disposal to reduce its surplus—tools that, rather than involving sacrifice, would make most Germans better off. Here are three examples.

Seeking a better balance of trade should not prevent Germany from supporting the European Central Bank’s efforts to hit its inflation target, for example, through its recently begun quantitative easing program. It’s true that easier monetary policy will weaken the euro, which by itself would tend to increase rather than reduce Germany’s trade surplus. But more accommodative monetary policy has two offsetting advantages: First, higher inflation throughout the euro zone makes the adjustment in relative wages needed to restore competitiveness easier to achieve, since the adjustment can occur through slower growth rather than actual declines in nominal wages; and, second, supportive monetary policies should increase economic activity throughout the euro zone, including in Germany.

I hope participants in the Washington meetings this spring will recognize that global imbalances are not only a Chinese and American issue.