My previous post discussed Larry Summers’ secular stagnation hypothesis, the notion that monetary policy will be chronically unable to push interest rates low enough to achieve full employment. The only sure way to get closer to full employment, in this view, is through fiscal action.

A shortcoming of the secular stagnation hypothesis is that it focuses only on factors affecting domestic capital formation and domestic household spending. But US households and firms can also invest abroad, where many of the factors cited by secular stagnationists (such as slowing population growth) may be less relevant. Currently, many major economies are in cyclically weak positions, so that foreign investment opportunities for US households and firms are limited. But unless the whole world is in the grip of secular stagnation, at some point attractive investment opportunities abroad will reappear.

If that’s so, then any tendency to secular stagnation in the US alone should be mitigated or eliminated by foreign investment and trade. Profitable foreign investments generate capital income (and thus spending) at home; and the associated capital outflows should weaken the dollar, promoting exports. At least in principle, foreign investment and strong export performance can compensate for weak demand at home. Of course, there are barriers to the international flow of capital or goods that may prevent profitable foreign investments from being made. But if that’s so, then we should include the lowering or elimination of those barriers as a potentially useful antidote to secular stagnation in the US.

Some years ago I discussed the macroeconomic implications of global flows of saving and investment under the rubric of the “global savings glut”. My conclusion was that a global excess of desired saving over desired investment, emanating in large part from China and other Asian emerging market economies and oil producers like Saudi Arabia, was a major reason for low global interest rates. I argued that the flow of global saving into the United States helped to explain the “conundrum” (to use Alan Greenspan’s term) of persistently low longer-term interest rates in the mid-2000’s while the Fed was raising short-term rates. Strong capital inflows also pushed up the value of the dollar and helped create the very large US trade deficit of the time, nearly 6 percent of US gross domestic product in 2006. The diversion of 6 percent of domestic demand to imports provides an alternative explanation to secular stagnation for the failure of the US economy to overheat in the early 2000’s, despite the presence of a growing bubble in housing (see Hamilton, Harris, Hatzius, and West (2015) for a quantitative analysis).

There is some similarity between the global saving glut and secular stagnation ideas: Both posit an excess of desired saving over desired capital investment at “normal” interest rates, implying substantial downward pressure on market rates. Both can account for slower US growth: Secular stagnation works through reduced domestic investment and consumption, the global savings glut through weaker exports and a larger trade deficit. However, there are important differences as well. As I’ve mentioned, the savings glut hypothesis takes a global perspective while the secular stagnation approach is usually applied to individual countries or regions. A second difference is that stagnationists tend to attribute weakness in capital investment to fundamental factors, like slow population growth, the low capital needs of many new industries, and the declining relative price of capital. In contrast, with a few exceptions, the savings glut hypothesis attributes the excess of desired saving over desired investment to government policy decisions, such as the concerted efforts of the Asian EMEs to reduce borrowing and build international reserves after the Asian financial crisis of the late 1990s.

This second difference is important, I think, because it implies quite different policy responses, depending on which hypothesis one accepts. As Summers has proposed, if secular stagnation is the reason for slow growth and low interest rates, expansionary fiscal policy could be helpful; and, in the longer run, the government could also take steps to improve the returns to capital investment, such as offering more favorable tax treatment and supporting research and development. If a global savings glut is the cause, then the right response is to try to reverse the various policies that generate the savings glut—for example, working to free up international capital flows and to reduce interventions in foreign exchange markets for the purpose of gaining trade advantage.

To help assess whether a global savings glut still exists, the table at the end of this post updates the data from my 2005 and 2007 speeches. Shown are national current account surpluses and deficits for four years, two before and two after the crisis, with the most recent being 2013 (complete data for 2014 are not yet available). The data, mostly from the International Monetary Fund, are in billions of U.S. dollars. Expressing current account balances in dollars allows for easy comparisons across countries, but keep in mind that the figures are not adjusted for inflation or growth in the various economies and regions.

The table confirms a few basic points about the evolution of current account balances:

First, the US current account deficit roughly halved (in dollar terms) between 2006 and 2013, falling to about $400 billion, or 2-1/2 percent of gross domestic product. Of course, the upsurge in US oil production, which reduced the need for imported energy, had a lot to do with that. Among the major industrial countries, the improvement in the US position was partly offset, arithmetically speaking, by a significant decline in Japan’s current account surplus and Canada’s sharp swing into deficit.

Second, the aggregate current account surplus of emerging market countries—whose large net saving was an important part of my original savings glut story—has fallen significantly since 2006. The decline is accounted for by the reduction in China’s surplus (partly offset by increases elsewhere in Asia) and a shift from surplus to significant deficit in Latin America (particularly in Brazil).

Third, the current account surplus of the Mideast/North Africa region was large in 2006 and remained large in 2013, reflecting continued profits from oil sales. However, given the sharp recent drop in oil prices, it seems likely that those surpluses fell in 2014.

Finally, in an important development, the collective current account surplus of the euro zone countries has risen by more than $300 billion since 2006. About a quarter of this swing comes from increases in Germany’s already large surplus, but the dominant factor is the shift from deep deficit to surplus on the part of the so-called periphery (Greece, Ireland, Italy, Portugal, Spain). Some of that may be due to improvements in competitiveness, but the bulk likely reflects the deep recessions those economies have experienced, which have reduced domestic investment opportunities.

What should we conclude? The interpretation of the data below can only be impressionistic, but here is my take. An important source of the global saving glut I identified before the financial crisis was the excess savings of emerging market economies (especially Asia) and of oil producers. The good news is that, for reasons ranging from China’s efforts to reduce its dependence on exports to the decline in global oil prices, the current account surpluses of this group of countries, though still large, look to be on a downward trend. Offsetting this decline, however, has been a significant increase in the collective current account balance of the euro zone. In particular, Germany, with population and GDP each less than a quarter that of the United States, has become the world’s largest net exporter of both goods and financial capital. In a world that is short aggregate demand, the persistence of a large German current account surplus is troubling. However, much of the net change in the euro zone balance in recent years appears to be due to cyclical factors—specifically, the deep ongoing recession in the European periphery.

Putting all this together, the global savings glut hypothesis remains a useful perspective for understanding recent developments, particularly the low level of global interest rates. Overall, I see the savings glut interpretation of current events as providing a bit more reason for optimism than the stagnationist perspective. If (1) China continues to move away from export dependence toward greater reliance on domestic demand, (2) the buildup of foreign reserves among emerging markets, especially in Asia, continues to slow, and (3) oil prices remain low, then we can expect the excess savings from emerging markets and oil producers to decline further from pre-crisis peaks. This drop has recently been partially offset by the movement of the euro zone into current account surplus. However, only part of the rise in the European surplus—mostly the part attributable to Germany—looks to be structural and long-lasting. Much of the rest of euro-zone surplus likely reflects depressed cyclical conditions. When the European periphery returns to growth, which presumably will happen at some point, the collective surplus ought to decline.

If global imbalances in trade and financial flows do moderate over time, there should be some tendency for global real interest rates to rise, and for US growth to look more sustainable as the outlook for exports improves. To make sure that this happens, the US and the international community should continue to oppose national policies that promote large, persistent current account surpluses and to work toward an international system that delivers better balance in trade and capital flows. 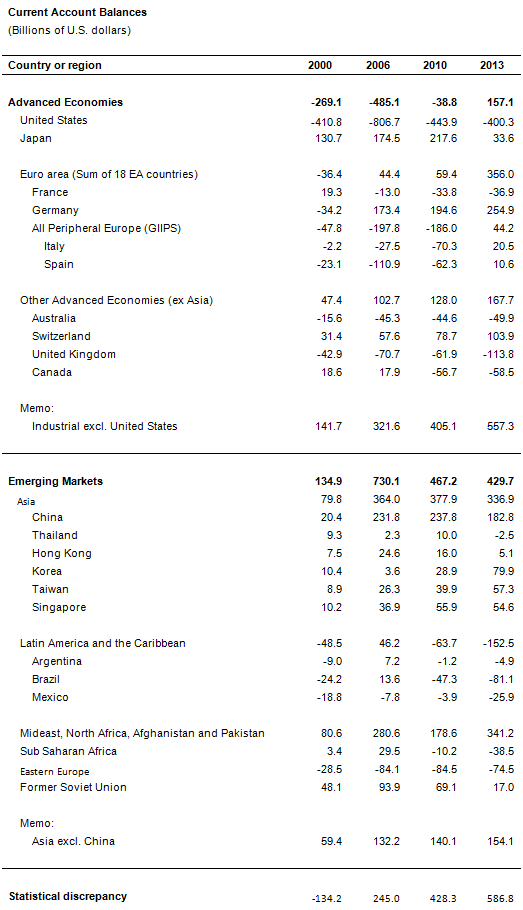 Sources: IMF World Economic Outlook database; national sources; U.S. Bureau of Economic Analysis, Department of Commerce. Advanced Economies includes G10, Euro Area (which is calculated as the sum of the 18 countries), and the Other Advanced Economies (as defined by the IMF, but excluding the Asian tigers).