While the recent United Kingdom vote in favor of Brexit has prompted new debates on the sustainability of the European Union and created the potential for economic disruption in Africa, African Union (AU) leaders meet this week to discuss Africa’s progress toward greater continental integration. In the Brookings Africa Growth Initiative’s Foresight Africa 2016 report, we highlighted some of the key differences between the two unions. While the European Union far surpasses its African counterpart in terms of financial resources, with the AU’s budget amounting to less than 1 percent of the EU’s, what the AU lacks in funds it makes up for in demographic resources, with a population of 1,050 million people—more than double that of the EU. Africa also stands to benefit from a young and dynamic workforce, with youth (15-24 years of age) comprising nearly one-fifth of the region’s total population. 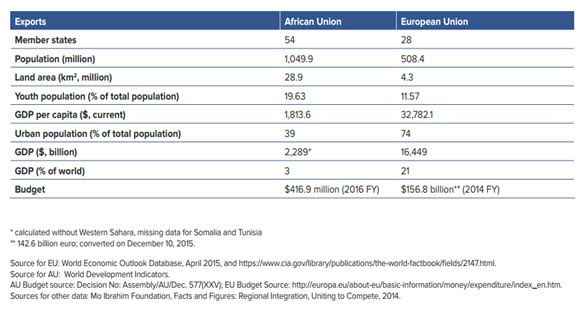 At the summit this week, the AU will unveil its new African passport, which will allow the free movement of African citizens across the continent. In addition, officials from the Economic Community of West African States (ECOWAS) will discuss its implementation of a common West African currency, the “eco,” originally scheduled for 2020 but long delayed. This plan could serve as a basis for an eventual pan-African currency, though it seems that commissioning a regional currency remains popular among African trading blocs for now.

This year’s summit will also host elections for the body’s new commissioners, with Commission Chair Dr. Nkosazana Dlamini Zuma notably declining to seek a second term. For more on this topic, see John Mbaku’s blog on the outlook for new leadership in the AU: African Union Commission elections and prospects for the future.