On Thursday, July 7, the International Monetary Fund (IMF) revised its economic outlook for South Africa. Despite “considerable economic and social progress” since 1994, the IMF report cited high income inequality, among other factors, in its projection of slow growth and increased unemployment in the medium term. Earlier this year, in the Brookings Africa Growth Initiative’s Foresight Africa 2016, we explored this pressing problem—high income inequality—across the continent. The initial takeaway was that sub-Saharan Africa has greater in-country income inequality than other developing countries around the world. However, after separating seven outlier economies—Angola, the Central African Republic, Botswana, Zambia, Namibia, Comoros, and South Africa—we noted that income inequality, measured by the Gini coefficient, in the rest of the region actually mirrors the rest of the developing world, which currently stands at 0.39. All seven outlier economies have Gini coefficients above 0.55, a level reached by only four other countries worldwide: Suriname, Haiti, Colombia, and Honduras. 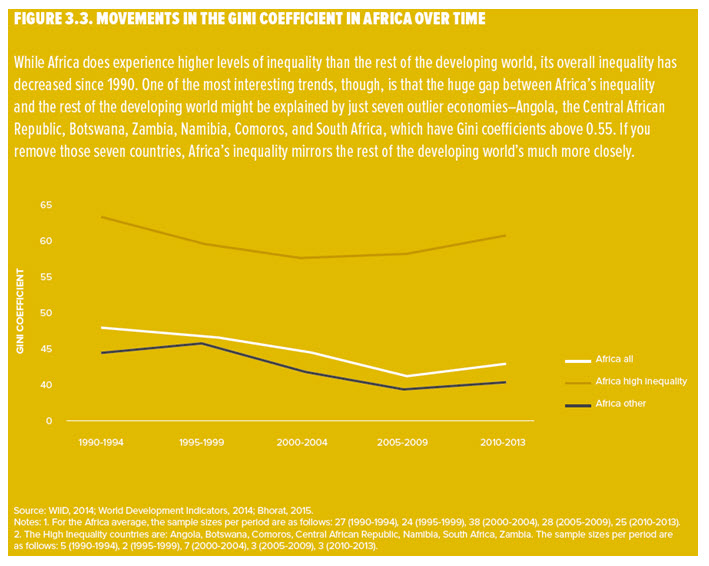 It is important to explore precisely why this disparity exists. Notably, sub-Saharan Africa is not only an outlier in income inequality, but also in the relationship between economic growth and poverty reduction. Generally, in the developing world, every 1 percent of growth reduces poverty 4 percent. In sub-Saharan Africa, however, every 1 percent of growth only reduces poverty by 3 percent. In Foresight Africa 2016, Brookings Nonresident Senior Fellow Haroon Bhorat suggests that this disparity may be because of the commodity booms that have sustained growth periods in African economies, which bring extraordinary returns to capital but limited job growth. Alternatively, these commodity booms may have accompanied a fall in manufacturing output; growth is thus concentrated in the low-productivity services sector. In any case, this graph forces us to consider exactly what type of structural transformation is necessary for continued economic growth and acknowledge that inequality in sub-Saharan Africa might require different solutions in different countries.

For a more in-depth discussion on this issue, see Foresight Africa 2016 and Bhorat’s discussion of African inequality in relation to the Sustainable Development Goals.