African governments have recognized the importance of the structural transformation agenda, successfully pushing to place job creation and industrialization to the forefront of the global stage by aiming to significantly increase industry’s share of employment and GDP as part of the Sustainable Development Goals. In light of this growing priority, this year’s Foresight Africa dedicates a chapter to the importance of strengthening domestic economic policies for continued implementation of structural transformation. Within, a number of leading experts contribute their opinions on why it should be top priority for Africa in 2016.

In his Foresight Africa 2016 issue brief, Global Economy and Development Senior Fellow John Page argues that with predicted growth slowdown of its trade partners, Africa should look inward more than ever to reduce external dependence and vulnerability to commodity price shocks.

Clearly there is a link between industrialization and well-being: As Page argues, industrialization is integral part of sustainable development because it is a high-productivity sector capable of absorbing large number of moderately skilled workers. Output per person in Africa’s manufacturing is six times more productive than agriculture, whereas output per person in the service sector is just two times more productive than agriculture.

Output and productivity are not the only benefits of industrialization. In my viewpoint, I write that, in addition to its merits, industrialization also allows governments to make long-term investments in infrastructure, skills formation, and institutional building as they aspire to grow and industrialize. The promotion of labor-intensive industries not only creates job for moderately skilled labor, it also contributes to poverty reduction.

Despite the importance of industrialization, industry’s share of GDP has been stagnant in sub-Saharan Africa for the past few decades, giving way to the services sector instead (see Figure 1).

Figure 1. Will the services sector continue its trend as the driver of growth in sub-Saharan Africa? 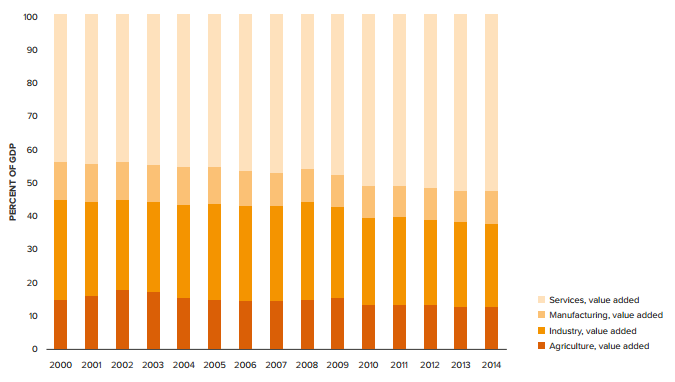 The industrial sector is not the major employer in the region, either.  Despite the high growth rates scored by many countries in the region, high GDP levels have not yet effectively translated into reducing unemployment rate, especially for Africa’s youth (see Figure 2).

Figure 2. Youth unemployment will continue to be a growing challenge in 2016 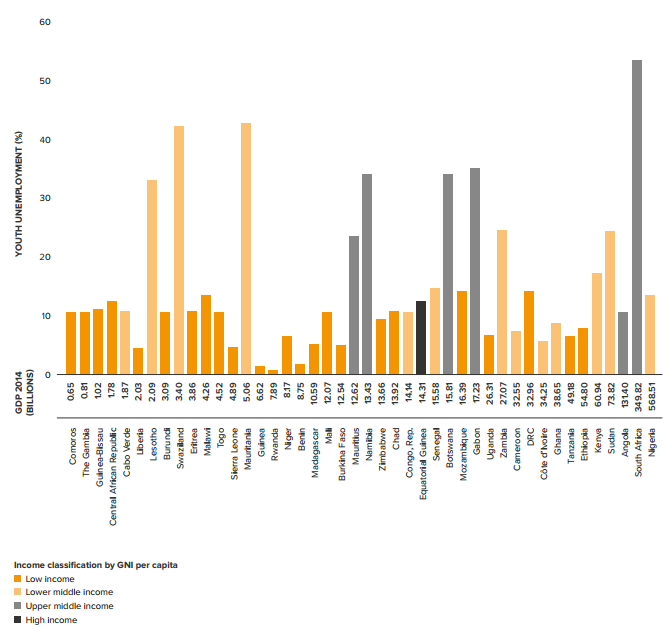 Now that the right set of goals are in place to support job creation from industrial development, African policymakers need to think about policy solutions for building sustainable industrial development. Foresight viewpoint contributor Margaret McMillan, professor of economics at Tufts University, notes the role of public-private partnerships not just in identifying the binding constraints of private sector development but also in generating creative home-grown strategies for growth and poverty reduction.

Also in his policy brief, John Page notes that export promotion, development of special economic zones, and attracting foreign direct investment are all key sources of firm capability—and these are also areas where government policies and financial support from the aid industry could be improved. He identifies policy and institutional reforms affecting exports, trade logistics, and regional integration as the three critical intervention areas to improve the region’s meaningful involvement in the export market. In addition, he argues that financial support for long-term investments in infrastructure and post-primary education, and trade policy reforms to increase preferential market access for Africa’s nontraditional exports are areas where international support for export-led industrialization could be strengthened.

Read Foresight Africa 2016, which details the top priorities for Africa in the coming year, to learn more about how domestic policies can sustain domestic growth and structural transformation as well as other critical issues for Africa. Watch video or listen to audio from our annual Foresight Africa event here.