Editor’s Note: The U.S.-Africa Leaders Summit blog series is a collection of posts discussing efforts to strengthen ties between the United States and Africa ahead of the first continent-wide summit. On August 4, Brookings hosted “The Game Has Changed: The New Landscape for Innovation and Business in Africa,” at which these themes and more were explored by prominent experts. Watch video and listen to audio from the event »

The historic U.S.-Africa Summit, held August 4-6, 2014, resulted in some remarkable achievements, including investment deals totaling a massive $33 billion and a new peacekeeping partnership with six African countries. While the summit garnered some attention over the course of the week, in large part the tragic Ebola outbreak (and other international events, including the violence in Gaza, Iraq and Ukraine) captured public attention instead, dominating media headlines. Less than two weeks after the summit has passed, the Ebola outbreak is still making headlines, while summit-related news has faded away.

To understand the extent to which dynamic, global events such as the Ebola outbreak may have influenced or even overshadowed media coverage of the first-ever U.S.-Africa Leaders Summit, the Africa Growth Initiative team conducted a brief study examining headlines of major newspapers as well as overall tweets during the week of the summit, August 3-8, 2014.

For the methodology and publications used see here » 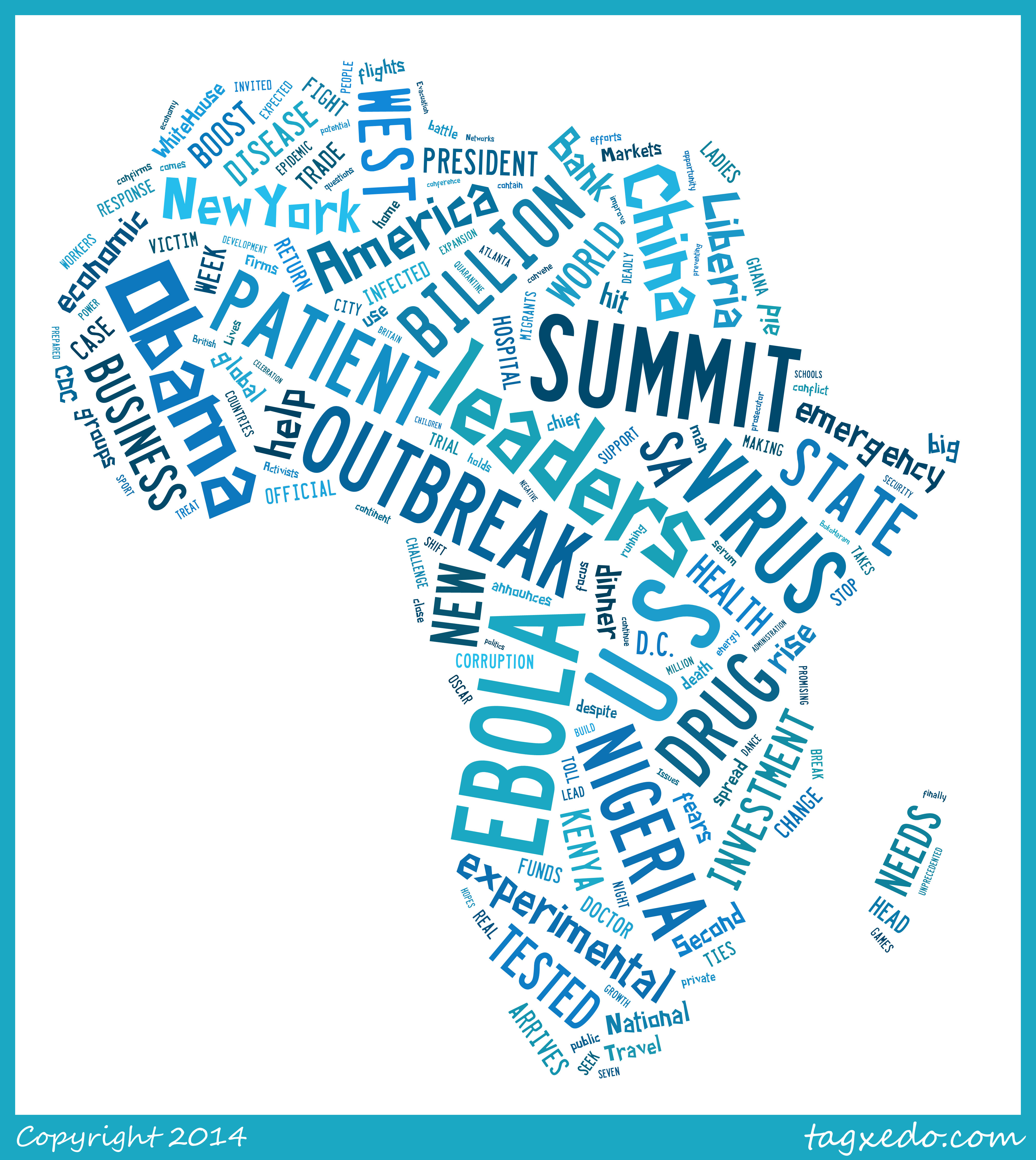 For the word clouds separated by international, U.S. and African publications, see here »

Variation in Coverage among U.S., International and African Publications

Of these 698 Africa-related articles published by our selected sources, U.S., international and African newspapers published 366, 161 and 171 articles, respectively. Table 2 shows the top five keywords in the headlines of the U.S., African and international publications.

“Ebola” was the most widely used keyword across all publications, with U.S., international and African sources mentioning it in 36, 31 and 17 percent of the headlines for the week, respectively. “Summit,” on the other hand, featured prominently in approximately 14 percent of U.S. headlines, but only showed up in 6 percent of African and 3 percent of international headlines. “China” ranked the second-most frequently cited keyword in headlines published by the international press—in 11 percent of headlines, with a few more mentions than “U.S.”—however “China” appeared in less than one percent of U.S. headlines and not at all in the African headlines, both of which appeared to prioritize stories on the U.S. and U.S.-Africa relations. African sources on the other hand highlighted “Nigerian” in 6 percent of their headlines. Across the board, “trade” and “investment” hardly appeared at all, in 2 percent or less of all U.S., international and African headlines, despite trade and investment being the central pillars of the summit.

Did Business-Focused Publications Cover the Summit Differently than General Publications?

Changes in the Public’s Attention on Africa During the Summit

Looking at tweets related to the U.S.-Africa Leaders Summit, Ebola and Africa in the weeks before and after the summit, we see that tweets mentioning “Ebola” did not surpass tweets mentioning “Africa, but not Ebola” until July 25, 2014 when a U.S. citizen, Patrick Sawyer, died of Ebola in Nigeria (see the first blue arrow on the timeline). In addition, around this time, two Americans working for Samaritans Purse contracted the Ebola virus.

During the week of the U.S.-Africa Leaders Summit, media coverage of Africa-related news did not highlight issues of trade and investment as much as the summit’s organizers might have hoped. Nor did the U.S.-Africa summit have the staying power to outlast the unfolding story of the Ebola outbreak. Since the Obama administration plans for a recurring U.S.-Africa Leaders Summit to serve as a key policy tool for future engagement and dialogue with the continent, it might consider ways of extending the dialogue past the end of the summit—because the conversation on U.S.-Africa relations need not end there, although this time around, it appears that it did.

In the following weeks, AGI will continue examining the overall media sentiment toward Africa-related news and will look specifically at its relationship to economic and financial indicators on the continent. We will gauge how major news publications have portrayed the African continent over time and to what extent this sentiment reflects (or predicts) indicators of African economic performance.

In the meantime, here’s to hoping that the next U.S.-Africa Leaders Summit will not be clouded by happenstance, but instead will capture the public’s attention and generate more meaningful discussions on the summit’s key issues and outcomes.

Landry Signé
Tuesday, May 17, 2022
Get daily updates from Brookings