Despite being a middle-income country, by international standards South Africa has an extensive and progressively targeted social security system. But is the scheme genuinely contributing to declining levels of poverty and inequality in the country? And what of the concerns that grants and social assistance is an aggravating cause of the structural disequilibrium evident in the South African labor market?

In 1980, the South African government committed itself to removing racial barriers in terms of many of its social benefits programs. By 1993, all individuals in need were more or less receiving the same grant level per beneficiary. This investment in the people of South Africa was well worth it—ensuring a better quality of life than any would have experienced without access to a grant, as well as the assistance given in terms of access to health services and education. South Africa’s social grant network has since grown to be among the largest in the developing world and, for this financial year, the scheme’s expenditure is projected to reach $12 billion.

More importantly though, the system of social grants in South Africa is well targeted, ensuring that the elderly, the disabled and those looking after children receive a cash transfer of some form. The number of people receiving grants increased from 2.4 million in 1998 to 16 million in 2011. In terms of the number of grant recipients and the proportion by type of grant, the largest are made up of the child support grants (71 percent), old age grants (18 percent) and disability grants (7 percent). Others include the foster care grant and the care dependency grant. While the public discourse on social grants is often critical and negative, research indicates that social grants have actually had a tremendous and noticeably positive socio-economic impact on poverty and inequality outcomes in South Africa.

Fiscal incidence estimates indicate that 76 percent of government spending on social grants is received by the poorest 40 percent of the population. In addition, the contribution of these transfers increases the share of total household income coming from grants to rise from 4.7 percent to 7.8 percent. Furthermore, the 2005-2010 expansion of the state’s social security system to include more grants for the elderly (by 23 percent) and child support (by 44 percent), significantly increased the levels of expenditure of the poor and contributed to declining household income inequality. Specifically, the data shows that if grants were not made available to South Africa’s poor, income inequality as measured by the Gini coefficient would have been considerably higher at 0.74 instead of 0.69. In Gini terms, this is a huge difference, and, indeed, the inequality-reducing effects of the social grants system cannot be over-stated.

Ultimately, social grants stabilized income levels of the poor in the post-apartheid era in South Africa. Figure 1 below presents a picture of annual household real income growth between 1995 and 2010 for the 2nd to the 5th decile of the income distribution—including and excluding cash transfers in total household income. The figure clearly shows that the inclusion of social grant income kept real household income relatively stable across the distribution. However, had income grants not been available, real household income would have declined for those in the 2nd and 3rd decile by 12 percent and 7 percent per annum, respectively. 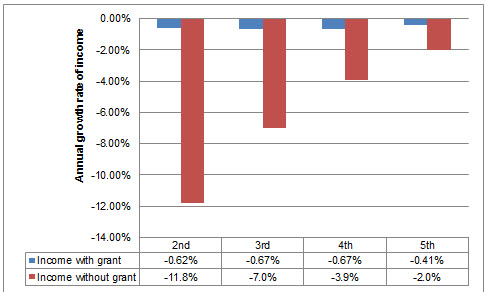 In addition to being well targeted and contributing to declining levels of poverty and inequality in South African society, the social grant scheme is also accepted as one of the most technologically advanced in the world. The use of a biometric system of ATM-driven cash advances to recipients in all parts of South Africa, for example, has drawn international acclaim in terms of its innovation, accessibility and safety.

Micro-econometric evidence further indicates that social grants aid investment expenditure by poor households and aid job search behavior among the unemployed. There is also very little evidence of labor supply disincentive effects arising out of the allocation of a grant [1][2]. Ultimately, the structural disequilibrium in the South African labor market cannot be viewed as arising from the country’s extensive and progressively targeted social assistance scheme. In fact, social assistance may well be just what many in South Africa need, enabling them to actively pursue a job search, move out of a poverty trap, and take control of and direct their futures, instead of being slaves to the circumstances in which they were born.

Dispatches from Africa’s COP: Kenyan youths on the frontlines of climate adaptation