Editor’s Note: In this piece originally published at The Atlantic Cities, Alan Berube describes the latest federal approach to jumpstart the housing sector. Berube also notes that the sector actually is comprised of metropolitan markets marked by varying levels of exposure to the mortgage crisis. 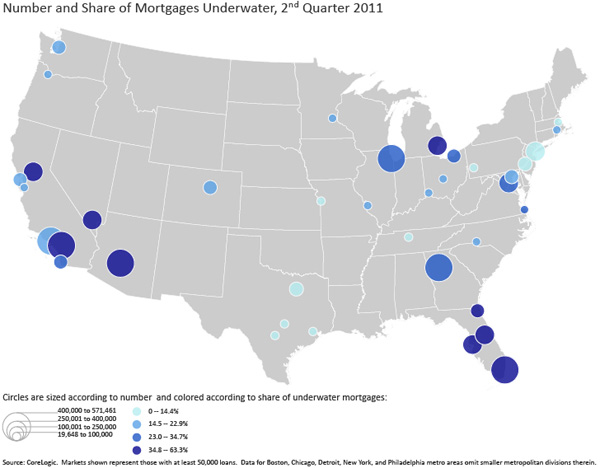 Yesterday, the Obama administration announced a new program to attack a problem that many experts believe is holding back broader economic recovery – the stalled U.S. housing market.

The Home Affordable Refinance Program (HARP) is actually an existing program under which nearly 900,000 borrowers have refinanced their mortgages in the past two years. The changes announced Monday would extend refinancing assistance to homeowners who owe at least 25 percent more on their mortgage than their home is currently worth.

The administration projects that another 1 million homeowners could refinance under the revised program to reduce their monthly mortgage payments. (Lowering the interest rate on a $300,000 mortgage from 5 percent to 4 percent would reduce monthly payments by about $175.) As mortgage data provider CoreLogic reports, these “underwater” borrowers are more likely than others to pay high interest rates on their mortgage loans. Their monthly payments may place difficult pressures on their household budgets and complicate their efforts to move elsewhere for jobs or other economic opportunities.

Once again, though, the numbers indicate that there is no national housing market, but a collection of metropolitan markets with widely disparate mortgage problems.