Editor’s Note: In an effort to shed light on the challenges that youth continue to face in the Middle East, Samantha Constant and Mary Kraetsch have created an interactive map and corresponding fact sheets that provide key statistics associated with youth issues for all 18 countries in the Middle East. In the accompanying note, they provide an overview of the data and their main findings. 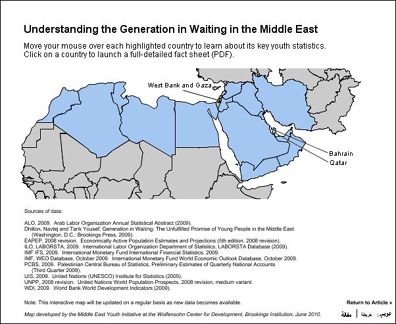 Click on an individual country in the map to view the country fact sheet, which includes key statistics related to that country’s economy, demographics, education and youth employment status.

Taking Stock of the Youth Challenge in the Middle East

The Middle East is at a demographic turning point. Many countries in the region are reaching the peak of their ‘youth bulges,’ meaning that the share of young people in the country’s total population will soon begin to decrease. At the same time, young people in the region continue to represent a high proportion of the total population with persisting challenges of high unemployment and increasingly underemployment. According to estimates from the United Nations Development Program (UNDP) and the League of Arab States, the region’s economies will need to create around 51 million jobs by 2020 to meet the demand of the total unemployed and those entering the work force.[1] A significant proportion of these jobs are needed for currently unemployed youth and new youth labor force entrants during the next decade.

Indeed, youth-inclusive development remains as important as ever in the region. What lessons can be learned from countries where the youth bulge has peaked and how can these lessons be shared across borders to better support the region’s next generation? How can countries adopt best practices and institutional models to more effectively support young people’s transition from school to work and their transition to marriage and family formation? Answers to these questions are critical for understanding and initiating any policies and programs aimed at addressing the Middle East’s long-term development trajectory.

Using available data, we have collected key statistics related to the general economic and demographic conditions of each country in the region as well as statistics on the education and employment status of youth.[2] However, for some countries there are gaps in the available data, and for other countries the available data is somewhat outdated. Additional surveys and data collection – and the regular publication of existing data by government agencies and research institutes in the region – will be invaluable for researchers seeking to examine the root causes of youth development gaps and for those who are, in turn, seeking to devise knowledge-based policy and program solutions that can better address those gaps.

In this note, we provide an overview of the data and our main findings. The accompanying interactive map and fact sheets provide key statistics associated with youth issues for all 18 countries in the Middle East.

Introduction to the Data:

General Economy. Key statistics related to the general economy of each country include total GDP, GDP growth rates, GDP per capita and the primary sectors of the economy. This data provides a general economic context for each country. It also highlights the diversity of the Middle East region, which includes wealthy oil-producing countries with relatively small populations and lower-income countries with relatively large populations. These differing country contexts affect youth and their transitions to adulthood in particular ways. However, at the same time, youth across the region face a number of similar issues and challenges in terms of their school-to-work and work-to-marriage transitions.

Demographics. The information includes total population and projections for the absolute number of youth and the youth share of the population for 2010 and 2020, which gives an indication of the size of the youth bulge in each country.

Education. Statistics on school enrollment rates at the primary, secondary and tertiary levels measure access to education and educational attainment. While access to education is relatively easy to measure through available data, it is more difficult to measure educational quality. We have also included data on public expenditure on education and pupil-teacher ratios as crude measures of education quality. Scores on international standardized tests such as TIMSS, PIRLS and PISA are more widely recognized and accepted measures of educational quality. In the Middle Eastern countries that participated in the 2007 TIMSS, average 8th grade student performance in math and science was below the low benchmark, indicating basic knowledge of the subject area.[3] However, the TIMSS scores are not included in the map and fact sheets because they are difficult to interpret without a more elaborate analysis that compares the scores to other countries and to the low, intermediate, and high benchmarks.

Employment. Data on unemployment and labor force participation rates allow us to assess youth employment status in the Middle East. This data was drawn from the World Bank’s World Development Indicators (WDI), the International Labor Organization Laborsta database, the Arab Labor Organization, and the Economically Active Population Estimates and Projections database (EAPEP). When data was available from multiple sources, the most recent data was selected. For some countries, unemployment and labor force participation rates are drawn directly from the source. In other cases, these rates were calculated using data from the Laborsta and EAPEP databases. We present this information for youth aged 15-24 and 15-29 (where available). In general, unemployment rates are higher for the 15-24 age group than the 15-29 age group due to the larger proportion of first time labor market entrants in the 15-24 group. In addition, labor force participation rates for the 15-24 group tend to be lower due to the high proportion of this group that are still in school.

A number of key findings emerge, which highlight the challenges and struggles that Middle East youth experience during their transitions to adulthood:

Most countries in the region have achieved near-universal school enrollment at the primary level. Enrollment rates at the secondary and tertiary levels are more varied across countries, but they indicate a high level of educational achievement in many of the region’s countries. This expansion in enrollment is a result of government investment in expanding access to education as well as student and parent recognition that school enrollment (especially at the secondary and tertiary levels) is necessary to secure heavily sought after positions in the civil service and public sector. While educational attainment has increased, educational quality in the region’s schools is generally poor and students leave school without the skills and knowledge needed to succeed in the job market. Poor education quality is a consequence of educational tracking systems and a reliance on high-stakes tests for university admission. This results in a system of education that promotes rote learning and memorization rather than the development of critical thinking and problem solving skills.[5]

High levels of school enrollment have not translated to positive trends in the youth labor market. In general, the region’s youth unemployment rates are high, ranging from 20-30 percent in most countries, but reaching as high as 45.6 percent in Algeria and 45.4 percent in Iraq. In addition, Middle East youth experience long periods of unemployment and often end up searching for jobs for two to three years in countries like Egypt, Iran and Morocco. The causes of high unemployment rates among youth vary from country to country and are often the result of a preference for government employment among educated youth, the dearth of quality jobs in the private sector, and skills mismatch in the job market. After completing their education, many youth prefer to wait for employment opportunities in the public sector rather than accept low quality jobs in the informal private sector.[6] In some countries in the region, youth are beginning to adjust their expectations to the realities of the job market. New research shows that youth unemployment rates in some countries have begun to decrease as youth are accepting employment in low quality jobs. For example, in Egypt, the recent decline in youth unemployment is paradoxically associated with a deterioration of job quality rather than any major improvement in labor market conditions.

The gender gap in educational enrollment at the primary, secondary and tertiary levels has narrowed. In fact, female enrollment at the tertiary level is greater than male enrollment in many Middle Eastern countries, including Bahrain, Kuwait, Lebanon, Qatar, Saudi Arabia, Tunisia, UAE, and the West Bank and Gaza. However, this narrowing of the gender gap in education has not translated to a similar narrowing of the gender gap in the labor market. Gender-specific data on unemployment and labor force participation highlight the unique challenges that young women experience in their transition from education to employment. In general, unemployment rates for young women are much higher than those for young men. In addition, labor force participation rates for young women are much lower than those for young men. These figures indicate that many young women do not enter the workforce upon their exit from school, either due to cultural norms and women’s own choice to focus on their roles as caretakers or due to their frustrations at poor labor market prospects.[7] Those young women that do decide to enter the workforce experience higher rates of unemployment.

These broad trends show that there is still much to be done to ensure smoother and more productive transitions for young people in the Middle East today and for future generations. The school-to-work transition for the ‘youth bulge’ that is now passing into adulthood has been marked by impressive gains in access to education compared to previous generations. However, the quest for gainful employment is still fraught with challenges. More research is needed to determine how institutions can inform the paths taken by young women and how institutions can grant young women greater career opportunities beyond traditional roles.

Even with updated statistics on demography, education and employment, there is still an astonishing amount of information that we do not know about today’s youth in the Middle East. This is because while we have good methods for measuring, for example, how many young people are enrolled in secondary school, indicators that examine the quality and value of what they are learning in the classroom are harder to define and measure. In terms of employment, it is relatively easy to determine whether or not someone is employed. However, job quality – often defined to include factors such as job security, pay, working conditions and benefits – is often neglected in large surveys. Looking ahead, it is critical that policymakers and researchers continue to ask these tough questions and support efforts to define and measure these elusive but necessary indicators of youth wellbeing.

Collaborating to transform and improve education systems: A playbook for family-school engagement

Collaborating to transform and improve education systems: A playbook for family-school engagement – Evolution